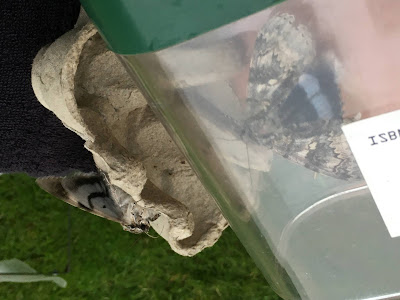 I wonder if anyone is writing about the remarkable revival in the fortunes of one of the UK's finest - and most finely-named - moths: the Clifden Nonpareil.  My generation and many before it grew up in the shining but wistful hope that one day we might see this most elusive of rarities. Only the Oleander Hawk moth has rivalled it in this regard, so far as I have been concerned. 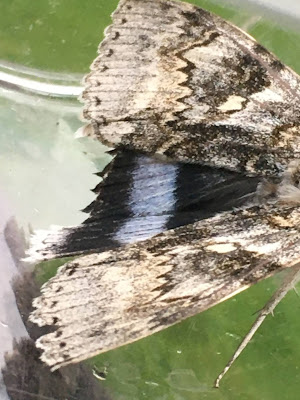 I say 'have been' rather than 'am' because the situation has been transformed beyond belief. To my astonishment, I found two Nonpareils in the trap this morning - just under 12 months since the first I had ever seen flew in on 18 September last year. 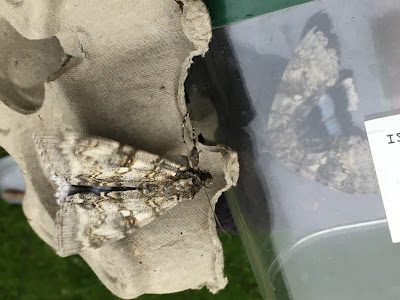 The change appears to have begun, or to have been noticed by moth recorders, in 2007, since when the species has definitely established itself along Southern coastal counties and gradually moved inland.  Its glowing blue stripes, such a rare colour in moths, have become a familiar sight on the Upper Thames Moths blog and a caterpillar was found not far from here a month or so ago. I was pretty confident that one would come my way in 2019 after a fellow-enthusiast played host to one in Wolvercote, just three miles in towards Oxford. But two together in 2020! No, I was not expecting that.

Especially as the last few nights have been cold and the eggbox tally of residents meagre, apart from the Old Lady which started up from near the trap site when I was lawn-mowing. I wasn't expecting much this morning, as the weather had been damp, albeit a little warmer, and I started off by photographing a Dusky Thorn and a Large Yellow Underwing on the lampholder, leaving the cowl off and the eggboxes wide open with every opportunity for moths inside to escape. 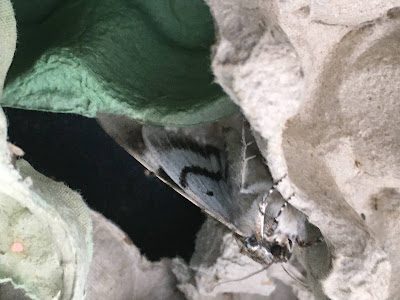 When I turned to them in a leisurely fashion...goodness, there was this VERY big moth. At first, I thought: "It's a Hawk of some kind" but I rapidly realised the truth. Equally rapidly, I slid the cowl and lampholder back in place while I nipped off to get my Bug Box to make sure that I got some pictures. Last year, I very nearly missed the chance as the moth took wing. Luckily I had been prudent enough to examine it in our greenhouse and I recaptured it, took my pics and then let it soar off grandly into the trees. 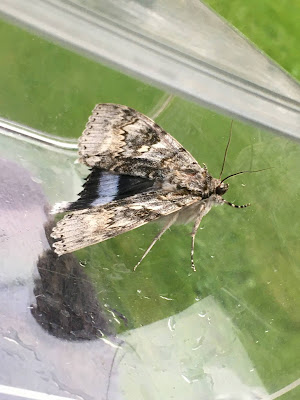 This one was soon safely confined and din't make a fuss and - again, having left the eggboxes open for quite a while, I began picking over them again. Gracious! I lifted one up and beneath it was the second Nonpareil. Photos were now assured and although the first moth soon flitted, after I had taken it upstairs to impress Penny with our morning tea, the second was more reluctant to go and spent a fair amount of time examining my fingers. 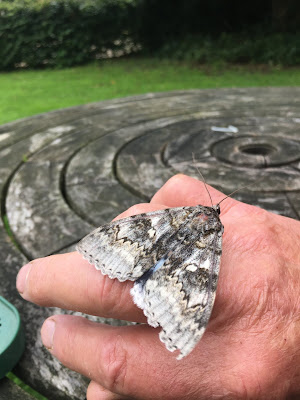 In retrospect, I suppose that I might have kept them together a little longer to see if they were opposite sexes and would mate. But that would then have involved further captivity to see if eggs would be laid and I didn't feel like inflicting this on such grand and gracious visitors. They are clearly thriving in this part of the world and I do not want to interfere with that. I also hope that no-one will interfere with the species' magnificent name. A tendency has crept in to add 'or Blue Underwing' which is fine, so long as it stays secondary to Clifden Nonpareil (follow the link to last year's piece, above, for the name's origin.

There have been other arrivals, but I will turn to them tomorrow.

Posted by Martin Wainwright at 13:03

As Dave Wilton rightly says: 'lucky so-and-so'. Well done Martin, may the Clifden Nonpareil recolonise for many years to come.

Marc Botham, a friend on the UTM blog, had FIVE last night! They'll soon be in Calderdale