The Legend of the Christmas Moth

There's not going to be anything flying tonight apart from the odd drowsy Winter Moth and possibly flights of angels. So here's something different, inspired (if that's the right word) by my debut in a Nativity Play this year at the age of 63 as a shepherd.  (I was too badly-behaved to be picked at school) 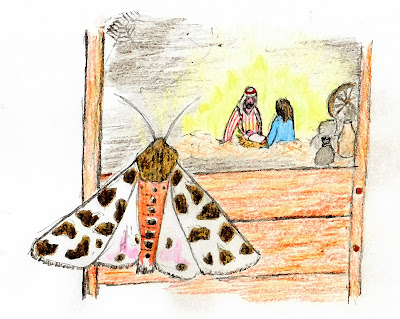 Before the shepherds had left their flocks
Or the Wise Men breasted the hill
Which looks down on the place where Jesus was born,
There was someone else. On the sill

Raptly looking at Mary his wife
And the baby so strangely born
As a model of how we should lead our lives
On that first dark Christmas morn.

So whether you're man (or woman) or moth
Here's wishing you joy and good cheer
And remember to log on when Martin's Moths
Starts again in April next year.

Merry Christmas one and all and all the very best for 2014!
Posted by MartinWainwright at 19:46 3 comments: 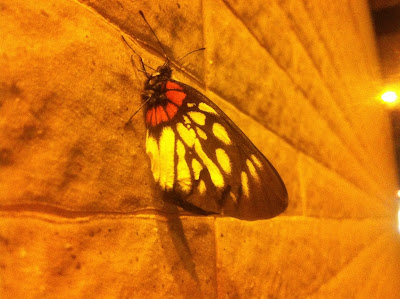 Here's something unexpected to brighten up the winter days. My younger son Olly, whose work you can enjoy here, has been out in Hong Kong and China for an architectural exhibition. Like all faithful members of my long-suffering family, he keeps an eye out for anything smallish and with four wings.

(I recall my older son Tom, father of our lovely new Emily Maheshwary, celebrated in my last post) spotting a Lime Hawk just down the road from here, on a wall in Walton Street opposite the Oxford University Press when he was a student).

Olly's find was this lovely butterfly, spotted twice. First, at the top, clinging to a wall on a street in busy Kowloon and secondly, as Olly says, "fluttering around the terraces of the amazing Chai Wan cemetery carved into the slopes of Hong Kong island."


He reports further: "It's called the Red-base Jezebel (Delias pasithoe) and it brings people joy, hope and youthful vigour according to this site -  http://butterflyclub.greenpower.org.hk/eng/article.php?id=6" It isn't entirely alien to us Brits. You can often see them in butterfly houses including, I think, the one just up the road at Blenheim Palace. 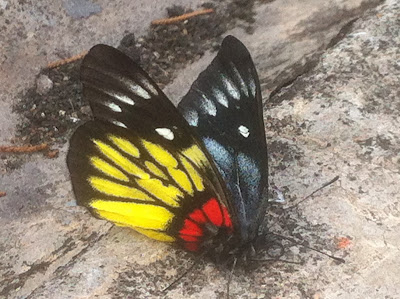 Many thanks to Olly. Jezebel has a special place in our family thanks to the Sunday School songs which lightened our Biblical knowledge, notably:

Jehu had a chariot of ninety nine horsepower
He drove through Ramoth-Gilead at 100 miles per hour
He had to brake a little bit just outside Jezreel
'Cos little bits of Jezebel were clinging to the wheel. 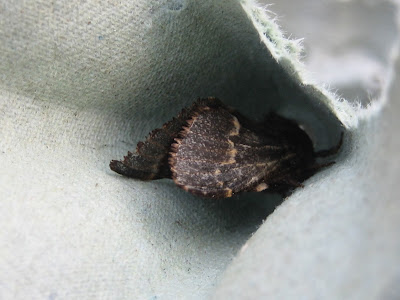 I'm not going to make a habit of this, in these dark, cold and unrewarding times for moth trappers, but I had a special reason for shining the lamp yesterday. The world's latest Wainwright and out first grandchild, Emily Maheshwary, has been born and is a sparkling new presence in our lives: very new, very wee but very wick. She and her proud and lovely Mum and Dad are all well. 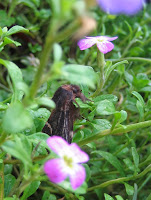 The trap saw an arrival in her honour: this December Moth which snoozed in its eggbox before exploring its surroundings as Emily will do in due course. It was nicely apt that these included a flower beloved of many small children, the Virginian Stock, whose pastel blooms, looking like so many Dolly Mixtures, have somehow survived a succession of recent frosts.

Welcome Emily! Many more, wonderful moths await you. Before long, we'll light the trap together. 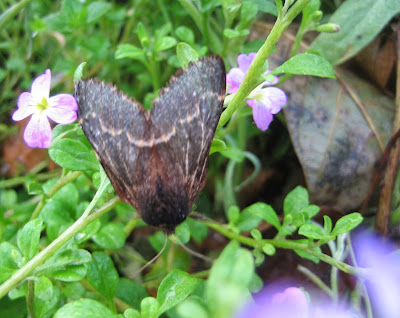 Posted by MartinWainwright at 11:00 2 comments: 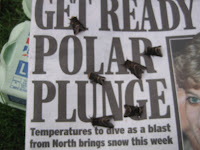 I lit the lamp last night for the first of my occasional off-season checks and was well-rewarded by a series of six finely-clad December moths. They are going to need their fur coats according to my mother-in-law's Daily Express which I used as a photography backdrop, although that paper tends to get a bit over-excited where the weather is concerned.

Interestingly, although the 'fur' looks worthy of Lara Antipova at first glance, the wings of the December Moth are unusually translucent because they have fewer scales than most comparably-sized moths. I hope to discover the reason for this, if anyone entomological has established it. 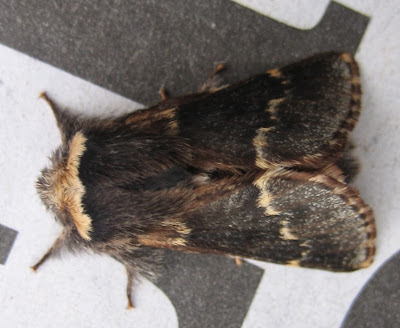 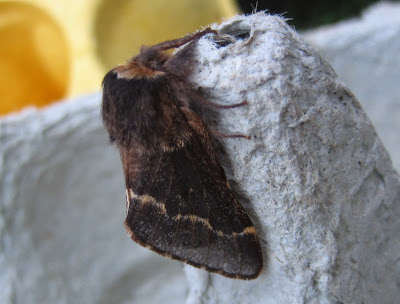 The Decembers are timely, with our Advent calendar burning away picturesquely at Number Two, although they were about in early November when I called time on regular trapping. A little more surprising is the presence of three other moths, below: two Chestnuts and a hardy member of the Carpet tribe (I cannot tell which). 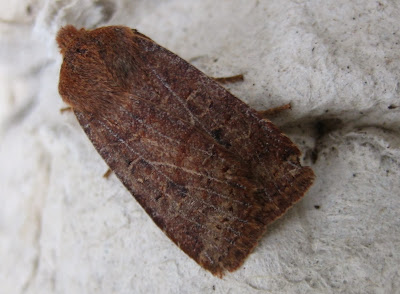 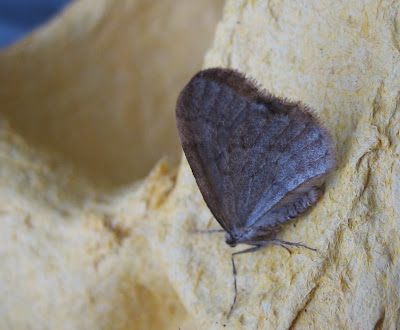 As you can see, my December Moths vary in size. Unlike the norm for humans, the larger ones are the females - see the contrasting pair below. These also lack the feathered antennae of the males but the moths were so sleepy and the early morning so cold that I didn't have the heart to goad them into showing the difference for my camera. 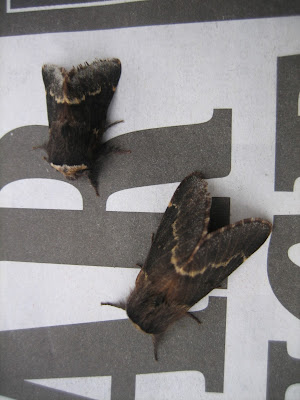 Posted by Martin Wainwright at 09:20 3 comments: