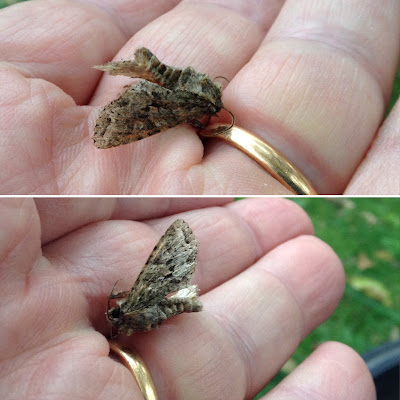 Ben Sale of the excellent Herts Moths Blog is always a very welcome visitor in Comments here and his last, on my most recent post, was an example. He took a look at the rather sad, dead and unidentified moth which I featured on 4th November - and repeat above - and wondered if it might be something a little rare.

To whit, the Sombre Brocade, a moth from southern France and the Iberian peninsular which isn't even mentioned in my first edition (2003) of the Moth Bible.  It does, however, make an appearance in the current, third edition (2017) after making landfall in Guernesey in 2006 and arriving on the UK mainland in Dorset two years later. Since then, it has been recorded in Cornwall, Devon, Kent and London and is clearly one of an encouraging number of immigrant moths which are making visits, and perhaps a home, amongst us. And will not be discouraged by Brexit.

But is this one?  When I put the photos above on the unfailing helpful Upper Thames Moths blog, the experts Marc Botham and Dave Wilton reckoned that it was a Brindled Green, which struck me as right. At that stage, I had still not heard of the Sombre Brocade and so I was interested, when Ben introduced me to it and I went a-Googling, to find how similar the two moths are. 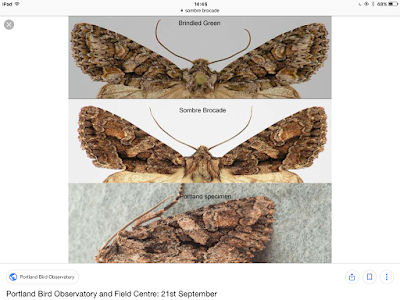 If you look at this interesting post from the Portland Bird Observatory in Dorset towards the end of September, you will see what I mean. And here, above, is their helpful picture of two 'standard' pictures of the Brindled Green and Sombre Brocade, together with a moth which was causing them a certain amount of ID headache, and which turned out to be an SB.

So I have copied their style and append two photos incorporating the forewings of my moth alongside the standards kindly provided by Portland, so that you can ponder and - if so inclined - pass your verdict on to me. However academic the exercise, because the moth is gone and its state and my photos almost certainly unacceptable for definite records, it will at least give you some sympathy for detectives, spies and others who have to puzzle for hours over grainy snapshots of CCTV images. 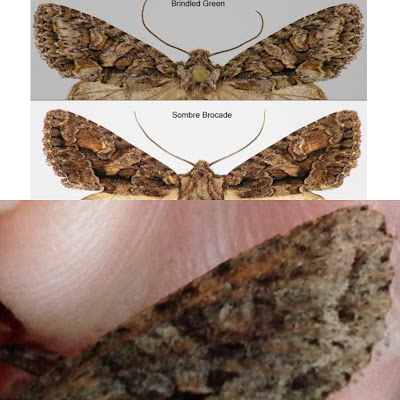 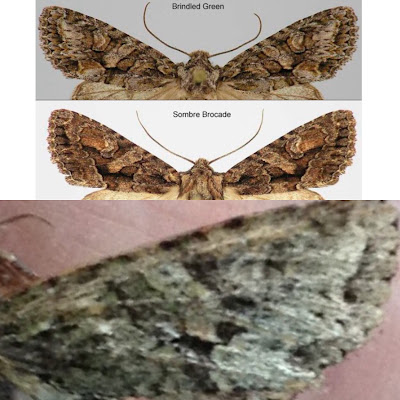 That's my hand in the background; how beautiful.  My own opinion still tends towards the Brindled Green, but don't let that influence you either way (seeing how I am almost aways wrong). Good luck!

Update: the experts on UTM all reckon that it is, or was, a Brindled Green, but also a useful reminder of the two moths' similarities. We will all have to keep a careful eye in September 2019.
Posted by Martin Wainwright at 07:07 No comments:

After a complete washout last night - driving rain and a supper engagement which meant that I couldn't put the trap out until midnight - I thought that I would just catch up with my backlog. I have a file on the desktop called 'Current Moths' and the word 'current' is beginning to turn into  misdescription. 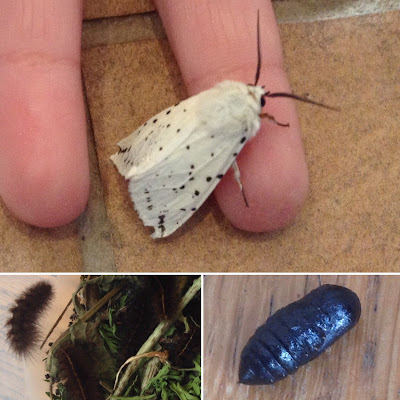 This top picture, for example, dates back a month when the 'phone went soon after I'd taken up the early morning tea and it was our granddaughter in a state of high excitement. "Grandpa! Grandpa!" she almost squeaked, "the White Ermine has hatched!" Sure enough, this being FaceTime, she was holding the delicate white insect in her hand; a very late emergence of what was a third generation for that particular White Ermine family whose history you can revise here.

I was slightly worried because I was due to take a box of White Ermine chrysalises from the same batch to a friend in Salisbury who is thinking of taking up trapping.  Would they all hatch in the same way, before I had the chance to pack and head off? Luckily, there have been no further hatchings since and the rest of the brood now face a long winter's sleep before they emerge in Salisbury and east London. 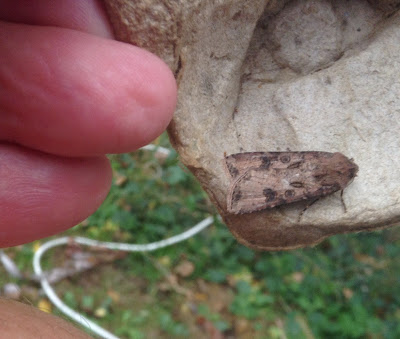 Nothing else very exciting to report; a handsome Heart and Dart above (Update - sorry, it's a Turnip, a good basic name for a good basic moth. Many thanks to Ben Sale in Comments for putting me right), a slightly blurred (sorry) Vestal below and one of those annoying grey species which I'll have to examine the moth Bible to pin down, maybe in front of the fire this evening. 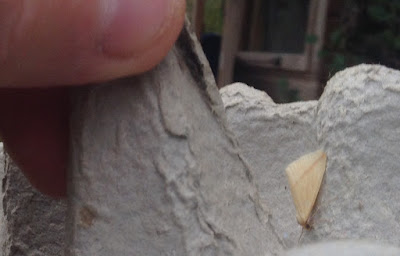 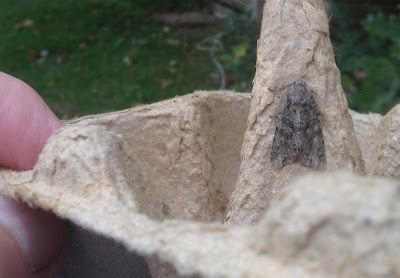 Oh, and it's nice to show the underneath of a Merveille du Jour, that glorious moth whose beautiful top wings normally get all the publicity. 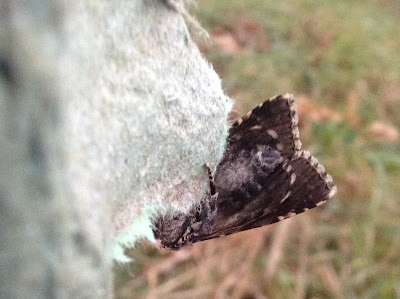 Posted by Martin Wainwright at 14:38 2 comments: 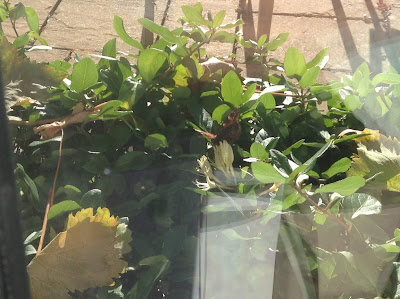 The weather in the UK is bouncing around more erratically than ever with icy days and nights followed by pleasant, mild spells, one of them under way at the moment. Penny and I are feeling particularly warm just now, having come in from a Mischief Night bonfire with added sparklers. It is interesting how even after a really cold snap which is slain our cosmos and brought all the walnut tree leaves down en masse, the sunshine can tempt out a Peacock - fluttering outside our dining room window at lunchtime, above and below. 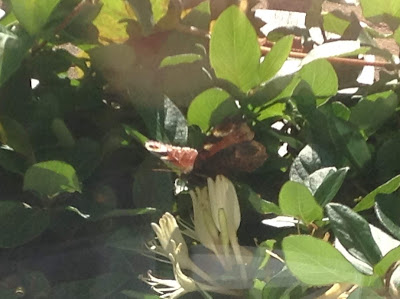 The moth trap has attracted some nice visitors, too, notably this Sprawler below, in its fur coat. The moth supposedly gets its name from its caterpillar's habit of rearing up and then flopping back when alarmed. But I like to think of it as a clubbable gent of a moth, settling back in one of those leather armchairs with a cigar and a glass of something. 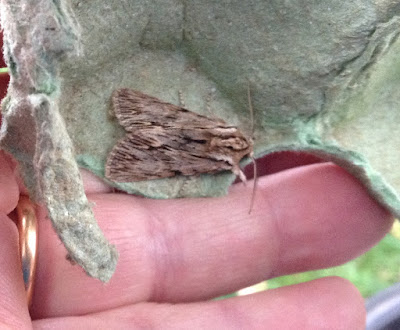 The Sprawler is a very active, jittery moth and this one scuttled about over the eggboxes for ages before deigning to hold still long enough for me to take an relatively unblurred picture. It never tried to take off, however, possibly through sleepiness and not yet having summoned up enough energy to use its wings. The way that moths have to do that, taking up to half-an-hour in the case of the Winter Moth on cold December and January nights, is shown by the Silver Y below. It was disturbed as I fumbled about with the eggboxes and is whirring its wings in the run-up to take-off, just in the way that aircraft used to do before releasing their brakes and heading down the runway.

More fur-coated gents now. There were six December Moths in the trap - first two pictures below - while on the lid, resembling the Sprawler but with a narrower, more rakish shape and more sharply curved trailing edges to its hindwings, there dozed a Blair's Shoulder-knot, increasingly also known as a Stone Pinion. It will be interesting to see if the latter name takes hold, leaving the famous Dr Blair (an entomologist who recorded new immigrant species on the Isle of Wight in the 1940s) with only the Blair's Mocha and Blair's Wainscot. 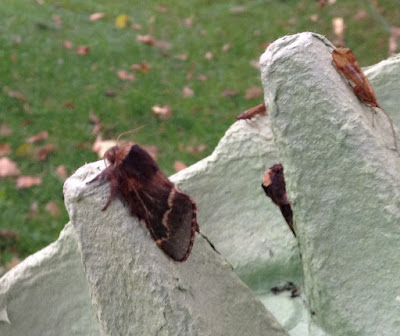 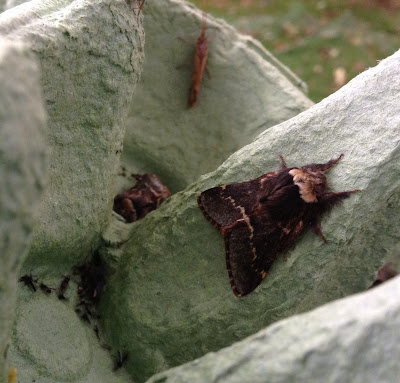 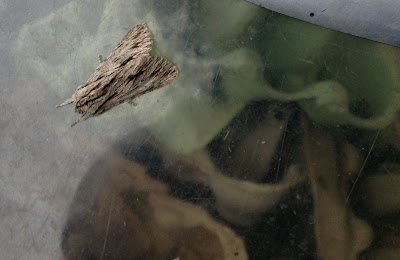 Other arrivals on quite a busy night included the Red-green Carpet below on the bulbholder's cone, a nice Feathered Thorn and a Yellow-line Quaker. 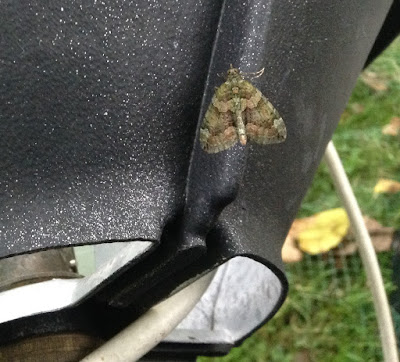 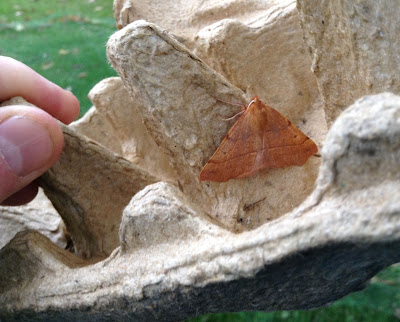 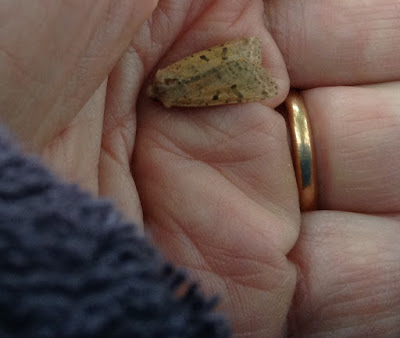 There was also the mystery (to me) moth below, already dead and possibly badly worn. I will enquire of the kindly gurus on the Upper Thames Moths blog. Update: in a Comment on my next post, Ben Sale interestingly suggests that this may not be a Brindled Green but the very similar, though much rarer, Sombre Brocade which is showing signs of spreading in the UK after first arriving in Guernesey in 2006. See my next post but one for more on this. 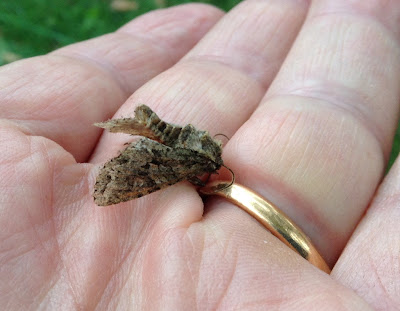 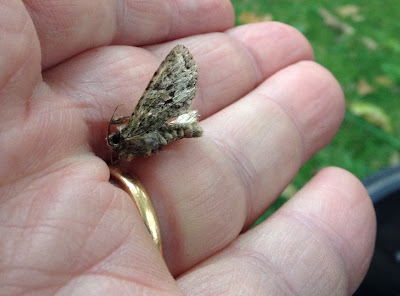 Finally, we have been doing some hedgework and in the process found a lovely collection of birds' nests. The moss and dried-mud one is especially sweet, possibly the work of a chaffinch according to friends who know more about birds than me. I've always been led to believe that nests are not often re-used, so P and I felt justified in detaching these ones to show the grandchildren.  I guess that it's good in any event for each generation of birds to do their own building, to make sure that the skills do not die out. 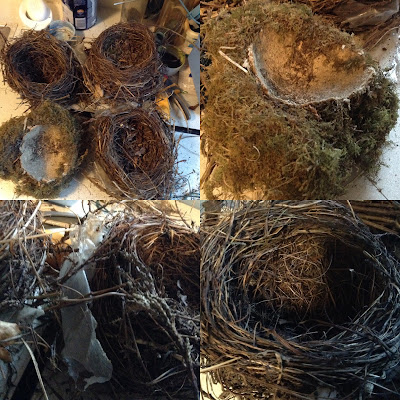