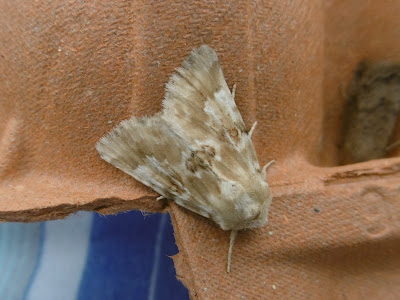 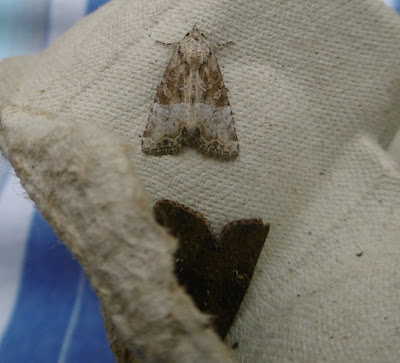 
Posted by Martin Wainwright at 08:45 No comments: 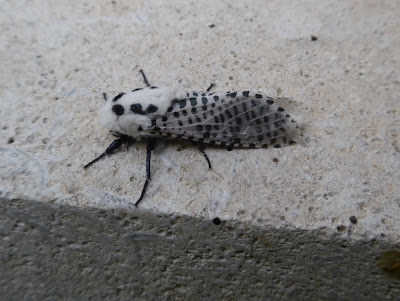 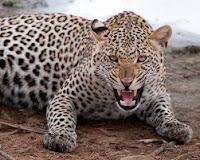 Spots of various sorts are the theme shared by today's extremely excellent visitors to the trap, starting with this Leopard Moth. It is one of the more primitive of the UK's moths, along with the Swifts and the Ghost moth, but in spite of that its caterpillar can grow for more than a year before pupating.

Its main interest for me is the way it uses op-art, dazzle camouflage to such good effect, with the black and white pattern breaking up its slender shape and disguising it from predators. My visitor provided a spectacular example of this, as you can see from the timing of the two photographs of it at rest, below. A bonus of its safe survival on a windowsill - passed during the day by hundreds of birds - was that some friends with children came round and I was able to lecture them (not too boringly, I hope) on dazzle technique. 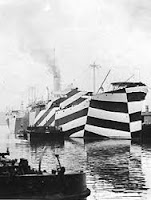 The moth has finally disappeared only this morning, presumably taking wing in the safety of night. It moved its angle slightly during the day, which saw it bathing in warm, direct sunshine at some times and dampened by drizzle at others. And it fidgeted very slightly when I bent over it with the camera. But otherwise its patterning and lack of movement gave it an impregnable defence. When discussing this subject, I can never resist using a photo of naval dazzle camouflage, which breaks up the shape of warships in exactly the same way, and here one is on the right.

My second spotty visitor is a considerable rarity although it has been here once before, on 23 July 2014, and a few other records suggest that it may be either spreading inland from its few coastal haunts, or immigrating (its usual means of reaching the UK) in larger numbers. It is a male Four-spotted Footman; the all-yellow female is the one with the four spots. Much the most striking thing about it, however, is its size which is double that of almost all the other Footman moths. You gasp when you first see it, wondering if some strange sort of hornet has called. I hope that my eggbox gives an idea of the scale.

My little picture of a footman of the human sort is to explain the moth family's name. With their grey and yellow uniforms drawn tightly round them, they resemble those servants in aristocratic households (and still in some courts today). 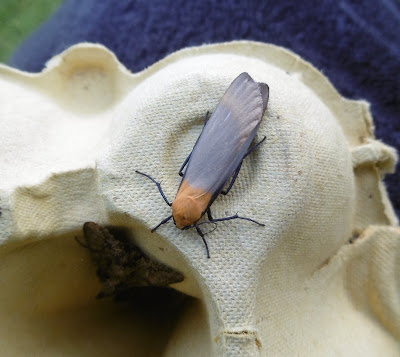 As if this wasn't enough, a third visitor was one of my favourite small moths because of both its appearance and its name. This is the Maiden's Blush and my example was becomingly modest: after allowing me the briefest of photo-opportunities, luckily with the camera playing ball on focus, it fluttered to freedom. Fortunately, I noted where it landed on the lawn and took the follow-up pictures. To go with my leopard and footman, I also attach a drawing of a maiden blushing, with much the same colour palette as the moth. 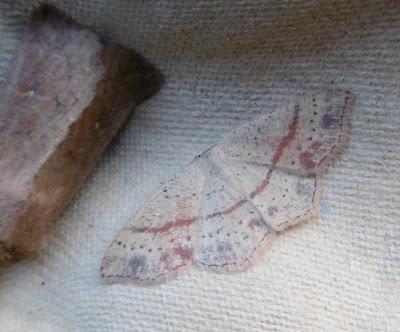 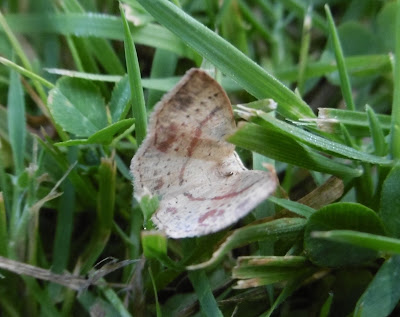 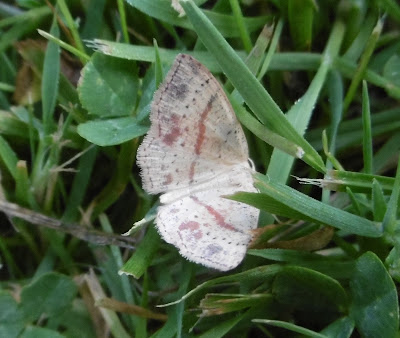 It was a very good night in - and near - the trap altogether and here are some of the other arrivals, I hope accurately identified:


Posted by Martin Wainwright at 08:58 No comments: 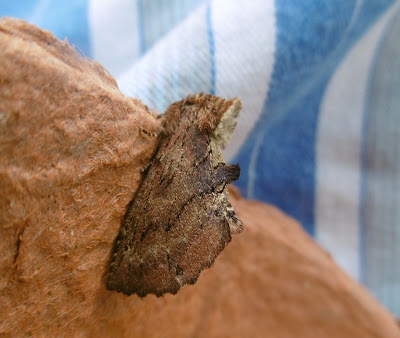 As with humans, so with moths. Among the generality of the insects, there are certain families which stand out. Pre-eminently the Hawk moths which often feature here; likewise the Tigers, which have been represented on this blog by the Garden and Scarlet versions. To them, in the premier league, I would add the Prominents; regular visitors and not rare (apart from the White Prominent which I hope to see in its last toehold of Ireland before I go to the land of eternal, mothy bliss).

Two came on Monday night and both showed why I like them. What curious shapes. What a difference from your average dart-shaped moth. The first is the splendidly and accurately named Coxcomb Prominent. The second, the bizarre Pale Prominent which resembles a half-eaten Cadbury's chocolate flake. 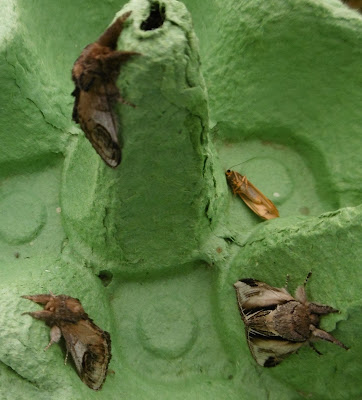 A second group of the family is very different: sleek and crouching when at rest, like a big cat hunting or a sports car. Most sleeping moths look dead to the world. These Prominents give the impression that they have half an eye open. One eggbox in particular was rich in them - above. Two Pebble Prominents and a Lesser Swallow Prominent. Here they, closer too: 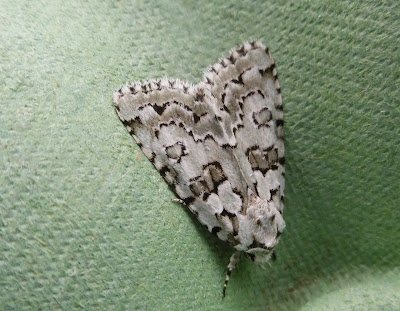 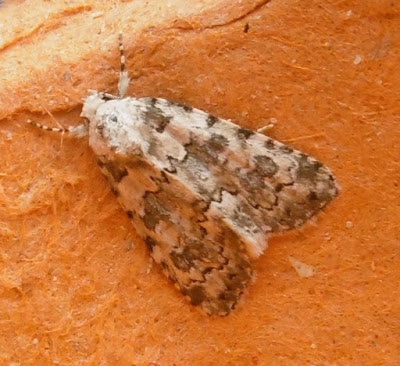 The night also brought me a Marbled Green (top above) and a Marbled Beauty (the one below), small but peerlessly patterned moths with slight, subtle distinctions which my photographs illustrate, I hope. These are prime candidates for use against those who erroneously hold that UK moths are brown and boring. Anything but. 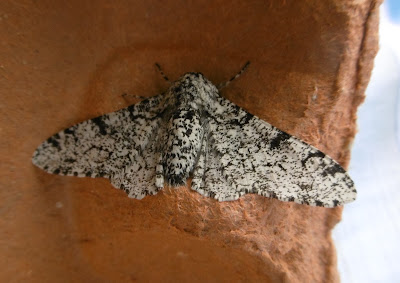 Ditto the Peppered Moth, above, not just a beautiful creature but one with a terrific history which I have often rehearsed here - see this link for example. Finally, an interesting little micro Hypsopygia glaucinalis gave me another moth new to my records. Its caterpillars have unusual tastes, finding sustenance in decaying grasses in haystacks, birds' nests and thatched roofs such as the one which I have built for my granddaughter's tree house. 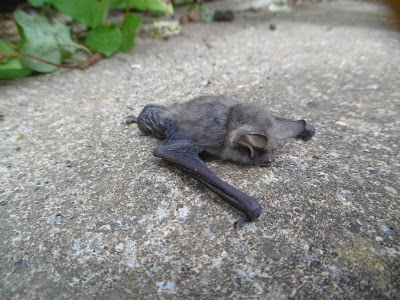 Moths have many enemies - birds, rain, cold and bats. Here is one of the last, which somehow came to grief, possibly by a collision after some failing in its famous radar. We found it dead on the terrace outside our house. Perhaps it is a juvenile which tumbled on its maiden flight. 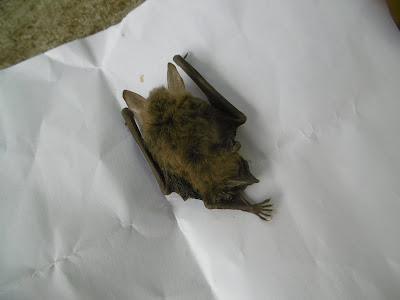 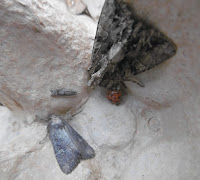 I have sent these pictures off to Bat Conservation both in Oxford and nationally and hope to find some answers, including which of the UK's various species it is. The feature of it which most intrigued me and Penny was the small nodule poking out of each ear, doubtless something to do with bats' incredible ability to hear. This supplements their radar and makes them deadly predators of moths - apart from the Large Yellow Underwing which has developed an extraordinary ability to counter bat radar signals. The ears of Long-eared Bats are apparently so sharp that they can hear a ladybird walking on a leaf. Or even an eggbox - see recent picture from the mothtrap, left. 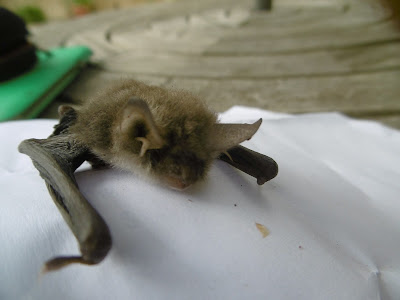 It's always a matter for reflection when you encounter animals with abilities superior to our own,  in however limited a field. Moths' antennae come into this category, along with more familiar talents such as hawklike vision or the speed of a cheetah.  Back to practical matters: neither of us could be sure from online photos which type of bat this is, or was, but I'll pass on the news when it comes from the experts. 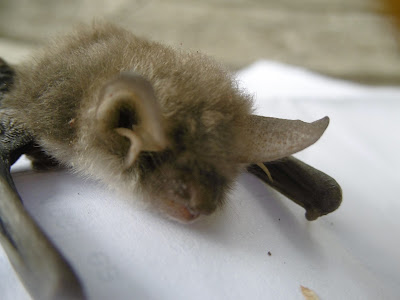 Meanwhile here is a common but beautiful micro moth, Pyrausta purpuralis. No prizes for guessing what purpuralis means. Why such a little nipper should have been given such noble raiment - purple being traditionally considered the king of the colours and duly worn by kings - I do not know but I have just started re-reading Professor Edmund Ford's classic book Moths to refresh my mind on such matters.

Having raised the issue of 'royal purple', I also felt an obligation to check why the colour has been considered so grand. Queen Elizabeth I, for example, banned its wearing by anyone who wasn't a member of the Royal family. Conversely, the Roman emperor Aurelian refused to allow his wife to buy a purple shawl because of the hit it would have inflicted on the family finances. 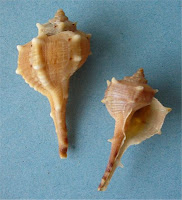 The answer lies in a Mediterranean mollusc called the Spiny Dye-murex whose secretions were used by dyers in ancient Tyre to make the colour. It required some 10,000 snails to make a gram of powder. Hence the price. We all wear it now thanks to the UK scientist William Henry Perkins who synthesised a chemical version in 1856 while experimenting with quinine, the famous anti-malaria drug. The name subsequently changed in fashion circles to Mauve, after the French term for the Mallow flower, one of hundreds in Nature which for centuries have flaunted their many varieties of purple in the face of the human race. 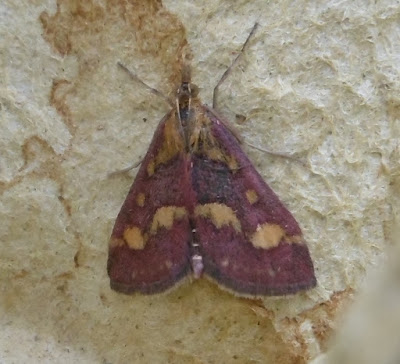 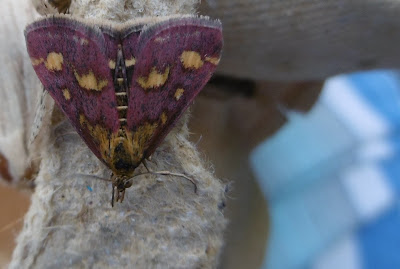 And lastly a somewhat dishevelled but still delicate beautiful Clouded Silver, one of the 'Laura Ashley' moths whose dainty grace reminds me of the nighties in which that company specialised when P and I were young marrieds. Purple just wouldn't have been the same. 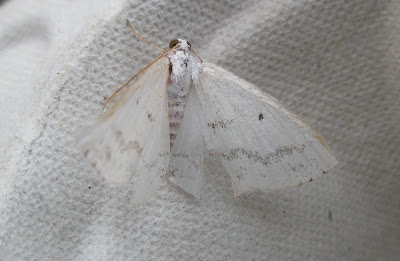 Posted by Martin Wainwright at 06:47 No comments: