This makes it eight, a year on 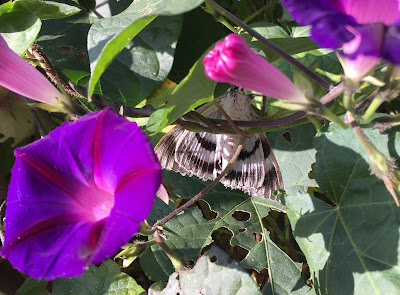 Tonight I celebrate the first anniversary of my first-ever Clifden Nonpareil, a moth which for most of my life, I thought that I would never see. This morning's eggboxes brought me my eighth this year. No matter that iRecord's antiquated robot keeps telling that they haven't been recorded within ten kilometres of my home, the success of this glorious creature just goes on and on. The post before mine on the Upper Thames Moths blog today announced the arrival of a specimen in Tackley, a couple of miles North of here. And so on it goes. 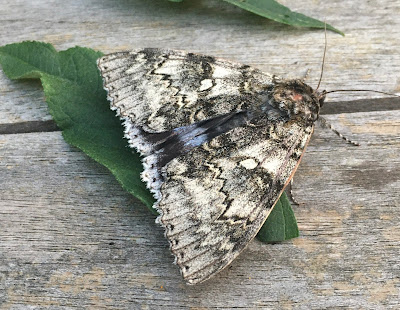 Today's moth has actually left our village, after a brief photo session here which produced my second photo. I was due to see a friend with a general interest in natural history this morning, three miles south-west in Wolvercote, so I popped the Nonpareil in a cosy box and swathed it in a blanket in my bike panniers. I didn't feel that I was being irresponsible (there is an understandable downer on releasing moths in unexpected places which may not suit them), because another Upper Thames Moths contributor recorded the moth in Wolvercote last year and in 2018. And who wouldn't feel at home in that lovely Morning Glory shown at the top of the post? 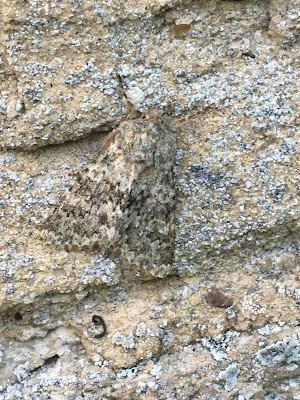 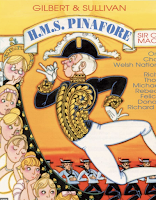 Another interesting visitor and new for this year is this Large Ranunculus, above and below, a moth with beautiful chips of honey-brown scattered among the varied greys of its wings. It had chose a suitable wall near the trap to sleep on, where its camouflage worked to best advantage. This is an only locally common moth but has a wide and varied diet as a caterpillar before it pupates underground in an unusually strong cartoon. Its name is the scientific one for buttercup, so it may be considered the older and fatter sister of the heroine of Gilbert & Sullivan's HMS Pinafore. 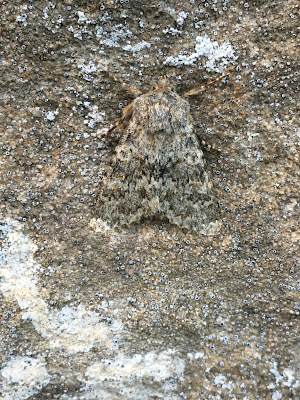 Finally, the experts on the UTM blog, including Martin Townsend the co-author of the Moth Bible, say that my poor, battered hero yesterday was a victim of wasp or hornet attack. Luckily, this happens rarely in the trap even though wasps and hornets get in there. Usually, they seem to fall asleep. But Dave Wilton picked up on the little micro in the background which I hadn't noticed but show blown-up below, and suggests that it could be Cameraria ohridella, the Horse-chestnut Leaf-miner, which was first recorded in the UK only in 2002 but has spread rapidly. We have plenty of conker trees round here but the blurred focus may make a definite ID impossible. 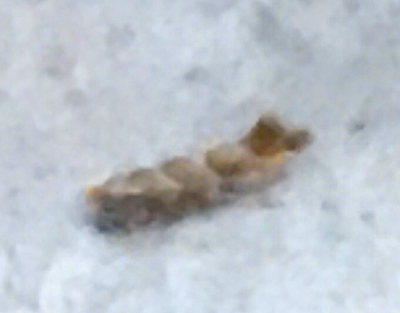 Posted by Martin Wainwright at 15:31