DRAMATIC NEWS! The trap has moved...

Sorry that things have been a bit spasmodic in the last fortnight but there's been a reason: we've moved.

It's the culmination of a plan hatched years ago when Penny sweetly came north with me for my job, uprooting our two small boys from our cosy nest in Chiswick with nothing but enthusiasm for the adventure.  I did go down on one knee, however, or possibly two, and promised: "One day, my dear, you will return to your native land. Or somewhere quite near to it."

Now, with both the above small boys much bigger and working in London, and with my recent retirement as Northern Editor of the Guardian, that time has come. And lo, the map now illuminates not Rawdon in Leeds but our patch of Kidlington in Oxfordshire. 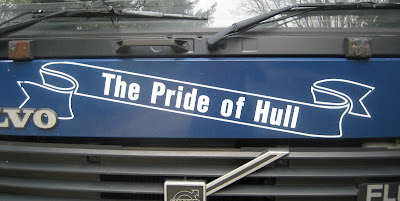 This is Martin's Moths, not Martin's Moves, so I won't go on. But above is a picture of the mighty pantechnicon which carried us south, and below the cave of unpacked boxes in which my Moth Bible is currently buried. 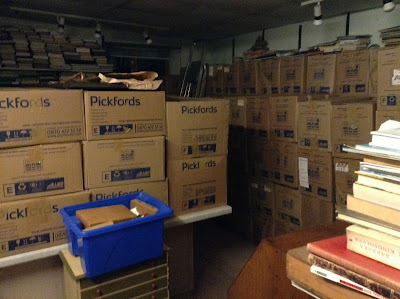 And here is the very first Kidlington moth: a familiar face, Diurnea fagella or the March Dagger, accompanied by a large beetle on my debut trapping which took place after a sunny day on a clear night with frost which you can see on the grass. 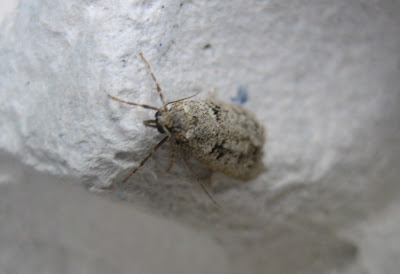 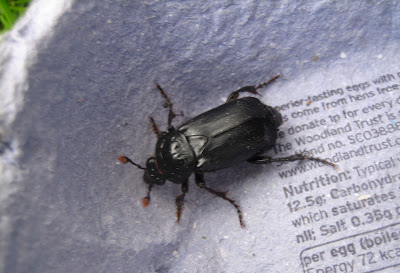 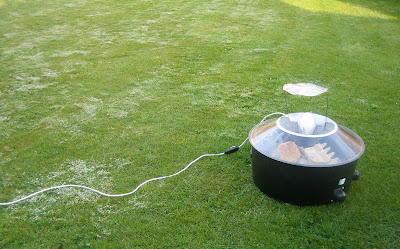 Better was to come the next night, when an assortment of Quakers and Hebrew Characters was accompanied by this very attractive visitor below.  He or she awaits my rediscovery of my Bible for identification but in the meanwhile, hey-ho for a new era. More very shortly. 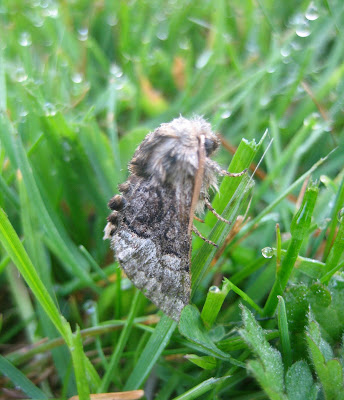 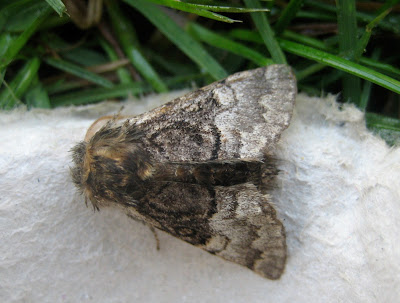 Posted by MartinWainwright at 14:56 6 comments:

Out in the sun

Sorry about the delay in posting - life has been busy. But at least it's given time for the sun to come out and to provide me with a sequel to the last installment.

I mentioned then that I knew the whereabouts of a Peacock butterfly hibernating in Oxford. I revisited it yesterday in temperatures and sunshine worthy of June; and it had gone. But not far.

Here it is, wide awake and beating at the windowpane in that desperate way which many writers have used as a symbol of baffled frustration. I opened the window and off he or she soared. But that wasn't the end of the matter.


Revisiting the room an hour later, I heard the familiar hopeless flutter-flapping and there was a second Peacock. I helped it out but the flapping continued.

Behind a grubby paint tin, there was a third. Marvellous how these creatures discreetly share the less frequently Spring-cleaned parts of our homes; but lucky that someone was around to make sure that the long winter sleep of these three ended happily.

Posted by MartinWainwright at 07:24 4 comments:

Rain is stopping play overnight but during a dry spell this afternoon, we were visited by our first Vanessid butterfly of the year. In Leeds, that is - I saw a Peacock last week in Oxford and know where another one is hibernating down there. On the Banbury Road a Brimstone also fluttered past us; not a Vanessid but just as bright and cheering with its sulphurous yellow. 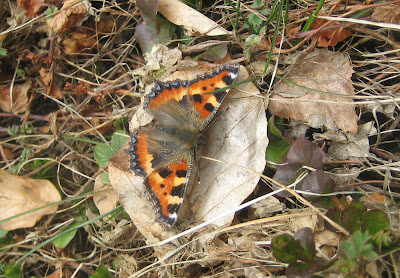 Our Leeds visitor was this Small Tortoiseshell, one of the commonest of UK butterflies but extremely lovely - as are its fellow members of the Vanessa tribe, the Peacock, Red Admiral and Painted Lady. None of them are rare - except perhaps as examples of common animal species in the UK being much nicer than many rare ones. A similar example amnog birds is the jay, apart from its awful cry (allegedly given to it by the gods as a punishment for being vain about its handsome appearance).

Why Vanessids? It's too late to ask Fabricius who chose the name for this particular butterfly family in 1807, the year before he died. For those who like mathematical fun, the same group of numbers differently arranged - 1708 - form the year when Vanessa was coined as a girl's name by Jonathan Swift from his tutee Esther Vanhomrigh. While I'm in this erudite vein, can I also draw your attention to the great entomologist F.W.Frohawk who named his daughter Valezina after a variety of the Silver-washed Fritillary butterfly; and to Edith Sitwell's only novel I live Under a Black Sun which is a strange and brilliant take on Swift, Vanessa and Stella (another tutee called Esther Johnson).

final fascinating fact: Swift was kidnapped as a baby by his nanny and taken to her native Whitehaven because she missed that lovely Cumbrian town so much.  But that's more than enough for one post, specially considering the total absence of moths. Although check out my tailpiece pic below...

Posted by MartinWainwright at 20:46 No comments: 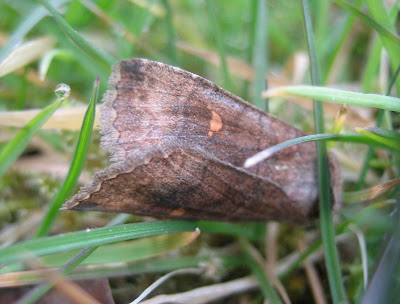 More mothy pleasures last night and it's getting warmer too. First off, here's an example of the orange version of the Satellite which arrived conveniently one day after the white type - please see previous post if you want to compare. 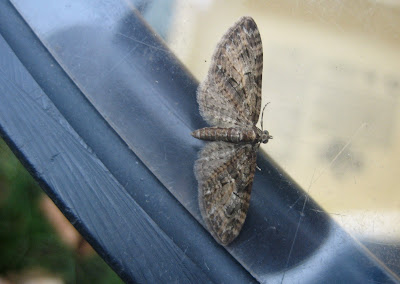 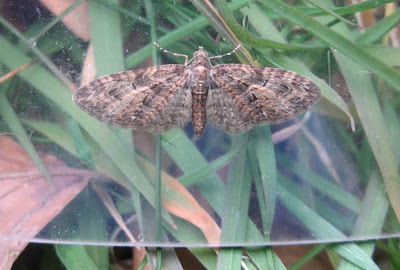 Next, it's a pleasure to welcome 2013's first pug moth, this Brindled Pug which also serves to show how photography can change the colourway of a moth's patterns. I'm no expert on taking pictures, but approaching this moth from two different angles produces markedly different effects, as you can see. 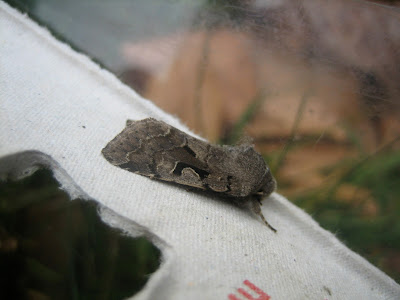 And finally, here's the season's first Hebrew Character, a regular from March in normal conditions, with its name derived from the close similarity between its dark wing marking and the Hebrew letter Nun. You can read more, including an alleged encounter between God and a moth, on one of my ancient posts, here.
Posted by MartinWainwright at 09:52 No comments:

Things have started at last 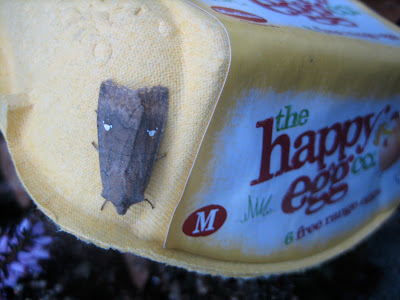 Behold!  A moth! No, moths plural. At last, the season has begun after weeks of cold and wet. Not that it's turned warm exactly; last night's temperatures were hovering around zero. But the first of the many eggboxes which I've accumulated over the winter months produced this: a handsome Satellite Moth with its flying saucer wing marking attended by two satellites. 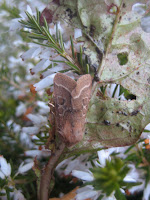 Yesterday I was down at the National Memorial Arboretum in Staffordshire, preparing a piece for the Guardian (yes, I have retired, but there are one or two bits and bobs to clear up). It's going to be about a memorial to the work of the Friends' Relief Services and the Friends' Ambulance Unit in which my father served as a conscientious objector in World War Two. As a result, I was with Quakers, those excellent people; and by happy coincidence my Satellite Moth was with Quaker Moths. There were five Common Quakers for a start and here's one of them.


Also in the trap: what I believe to be a Clouded Drab, a truly demeaning name which ought to be changed by the Global Moth Authorities as I have demanded previously. It is attractive and subtly patterned in its modest way. 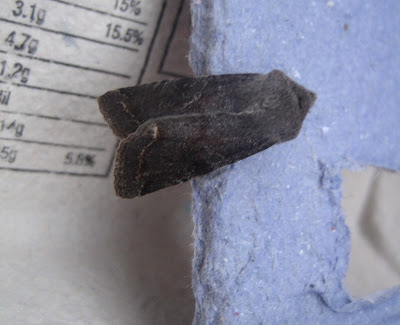 And finally this, below. I think in my disorderly way which is the despair of my mothing advisors, that it's a Small Quaker. There were three of them. Please correct me if I'm wrong. Meanwhile, I just had a look back at the blog last year and although April seems to have been a bit bleak, I had more than 50 assorted Quakers visiting in one night in late March and a rich range of other moths in the month which this year has been all but blank 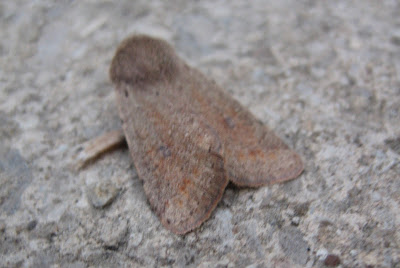 Posted by MartinWainwright at 12:10 3 comments: