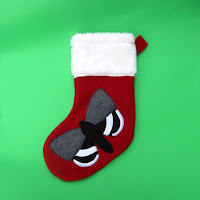 Hi one and all and a Merry Christmas plus all warm wishes for the New Year. The trap is packed away and I shall spend the next month or so trying to sort out and send off my records, a very long overdue task.

Meanwhile here is a Christmassy and mothy picture which I found on an internet forum devoted to matters moth.  Its poster imagines appositely that clothes moth larvae will spend many happy hours chewing away at it.  Keep those cashmere sweaters well dosed with strong but not unpleasant scents and meanwhile I hope that you enjoy the mince pies!
Posted by Martin Wainwright at 06:19 4 comments:

Brrrr! Glad I put on my furs 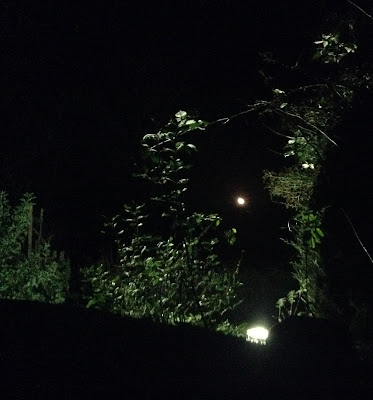 It was a lovely evening last night, crisp and clear with a swollen moon presiding over the garden. I had a relatively leisurely morning in prospect and so couldn't resist the temptation to put out the trap, even though this are usually pretty moth-barren times. 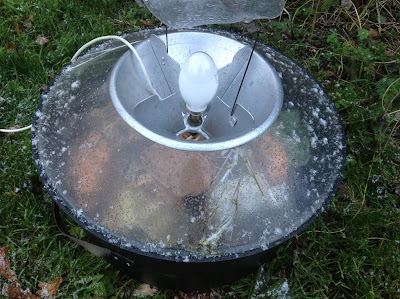 I'm glad that I did, because the morning saw our first snowfall of the Winter, only a few modest flurries but enough to make the garden look as though someone had sprinkled it with icing sugar, just as Penny is currently doing with her home-made mince pies, yum. The trap was also sprinkled but protected from getting seriously wet by a nearby hedge. 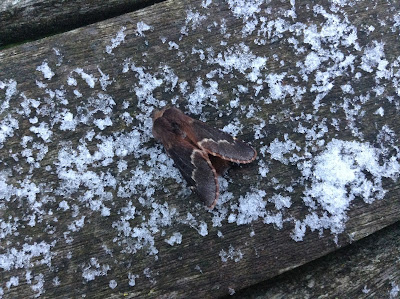 When I went through the boxes, I failed to see any moths and came to the conclusion that, not surprisingly, none had stayed the night. But while putting them back, I spotted this handsome December Moth in very good condition, snugly wrapped in his fur coat. He didn't mind when I decanted him on to our snowy garden table for a seasonal picture, and went back to sleep when I popped him safely back into his eggbox and hid it under the hedge.

I doubt that I will put the trap out for a while now. But the lure of curiosity about what may be flying out there is great. So you never know.

Posted by Martin Wainwright at 22:15 No comments: 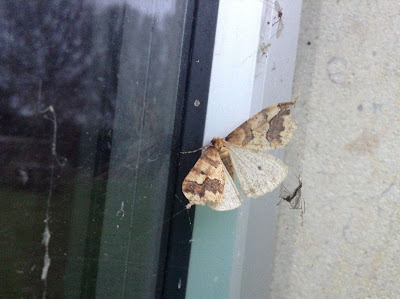 I haven't lit the lamp since my last post, three weeks ago, because that night the fuses went in the house and because it had rained, I assumed that this was caused by the moth trap.

Last night, however, we had a young cousin to stay and the weather turned mild - thank goodness, because you feel the bitter cold at my age - so I thought: well, let's see if it works. And it did.

So I think that electrically I had put two and two together and made five, which is what I did pretty consistently as a schoolboy in all the many maths and science exams which I always failed. (My excuse is that none of the relevant teachers had a spark which might have ignited my mind, but I accept that there was probably fault on both sides).

Anyway, there was nothing in the trap this morning when we examined the eggboxes while my cousin gulped down her disgustingly healthy breakfast of gravelly muesli. But look! Entangled in one of the many spiders' webs which I carefully protect from too much cleaning on the outside of our windows, was the Mottled Umber shown at the top of this post.

My cousin is a natural feminist I am glad to say, so I sorrowfully showed her the dismal lot of the female Mottled Umber, the flightless bug on the right in Richard Lewington's beautiful illustrations from the Moth Bible, above. These poor creatures hatch, climb up tree trunks, emit pheromones, accept the consequences, lay their eggs and die. Veritably, the stuff of a Margaret Atwood dystopia.

As you can see below, the spiders have been busy elsewhere on the window. They are doing better than my mercury vapour lamp. 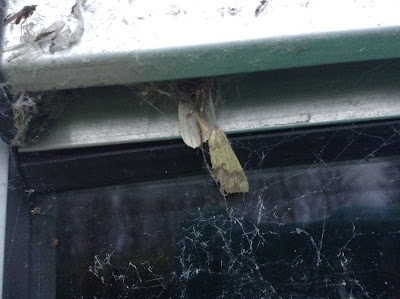