The coming of Spring 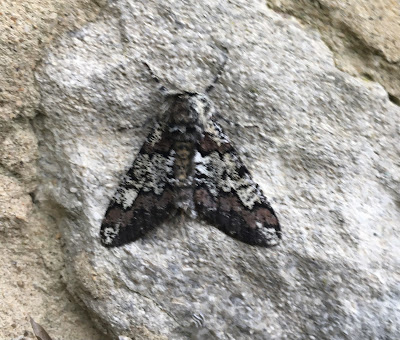 How lovely! Spring weather as early as this; and it has brought that nicely-named moth the Spring Usher to my light. Among the regular company at this time of year, it is attractively coloured and patterned too, though it would hardly stand out among the moths which will be winging their way here in the next few months. Update: whoops, my first bungle of the year, though luckily I am the one to discover and correct it. This is actually an Oak Beauty, a less interesting name but a more attractive moth. Sorry!
Look at how well its light colouring chimes with the stonework on our house. The stones differ slightly and the match would have been less exact if it had gone for one of the caramel-y ones which you can see on either side. Was this choice or chance? I have to say that I spotted its distinctive triangular shape immediately, so the camouflage was useless against humans. But birds' eyes work differently from ours. 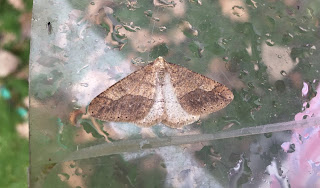 Like many wintertime moths, it preferred to sleep outside the trap rather than go inside. The eggboxes are still only sparsely occupied but their residents in the last week included two species new for the year; a Dotted Border on the underneath of the transparent cowl and the curious little micro-moth Acleris Cristana. I call this the Lizard Moth because well-marked examples such as the one here (though you can get even brighter ones) look as though they have a lizard perching on their back. 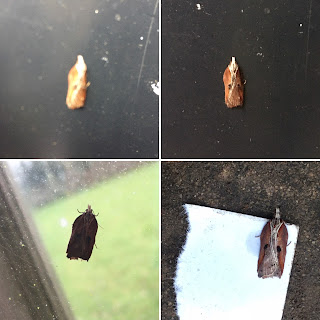 This sequence of pictures shows the difficulty - for me at least - of photographing moths which initially choose to snooze on the trap's black plastic bowl. I got there in the end, even though the tiny moth escaped at one stage and moved to the shed window where it was even harder to photograph. When Penny saw these pictures she sapiently said: "Ah, you can tell which is the male and which is the female," her rationale being that the two moths on the right have their wings folded differently, just as men and women do with jackets (unaccountably to me; I must Google for the reason, is any). As it happens, the two moths are the same specimen so, although wrong, P has raised an interesting question: do individual moths fold their wings differently and if so why? Or is it random? 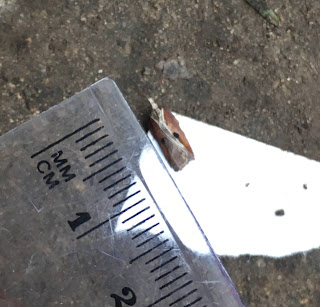 Cristana comes in more than 130 variations in the UK alone and is also very small - most unusually for me, I managed to get this one neatly alongside a ruler. These two things are among the reasons why micro-moths will never really get my attention or admiration. 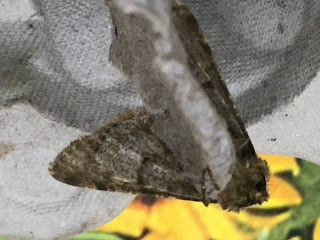 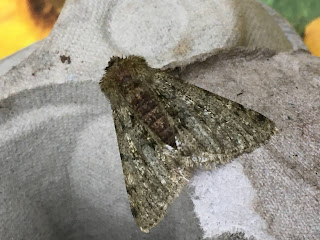 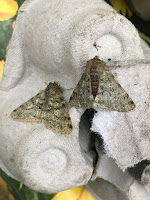 Here in conclusion (at least so far as the moths are concerned) are some examples of my most frequent current caller, the Pale Brindled Beauty: a pair on the left and a single specimen from below and on top, above. Plus a Chestnut. Meanwhile I have interesting news from the sister world of butterflies. Yesterday, I saw my first Brimstone which is very early; and here is a Small Tortoiseshell hibernating in the bedroom where our one-year-old grandson will sleep with his Mum and Dad when such happy times are possible again. Like some especially wonderful moth, P and I are looking forward to getting to know him properly at last. 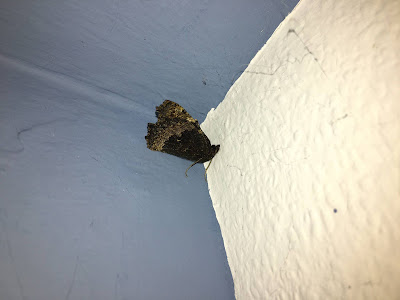 Posted by Martin Wainwright at 11:50 2 comments: 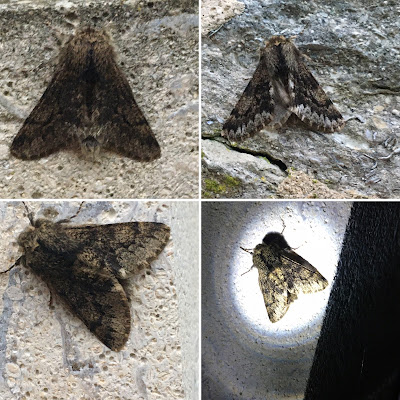 Sorry, I'm rather behind with this post which describes a multitude of moths, even a horde by February standards, which actually arrived on the night of the 15th/16th. I blame lockdown which - for us retired types - induces a pleasant lethargy and a feeling that there's all the time in the world. However, the children have started making initial murmurings about grandchildcare renewing in May or thereabouts, so this lotus-eating period is going to come to an end.
Anyway, the quartet of moths at the top are a welcome sight, four Small Brindled Beauties whose isosceles shape is at odds with the wider triangle formed by most regulars at this time of the year, such as the four Pale Brindled Beauties below. The Small BB is also less seldom found and has 'local' rather than 'common' status. Thank you for calling, Gents. 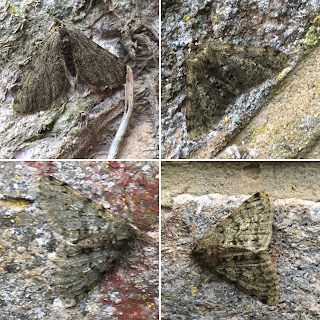 I say 'Gents' with confidence because the Brindled Beauty family all have flightless females. Looking like a cross between a brown ladybird and a woodlouse, they sit on tree trunks waiting for a mate, lay their eggs and die. Scientifically, this is reckoned an efficient example of natural selection as the female takes few risks and therefore tends to avoid harm. In terms of a life well-spent, however, it scores lower than the bottom of the scale. 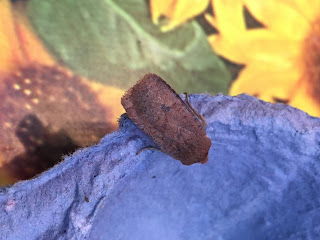 My final moth is a Chestnut, whose dominant colouring makes a change from the Brindleds. Interestingly, it was the only moth apart from a solitary Pale Brindled Beauty which actually entered the trap and roosted in an egg box. The others were all on a wall nearby, most of them there by 11pm - when I took the torchlit photo, and all them snoozing undisturbed in the morning at 8am in spite of light drizzle.
Posted by Martin Wainwright at 10:17 No comments: 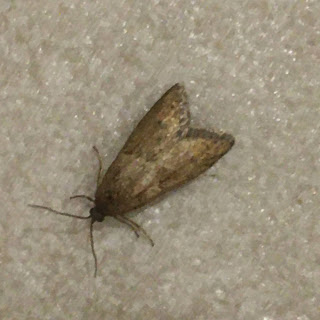 Things are inevitably very quiet in this icy spell but the gradual thaw which began this morning may bring better fortune. In the meanwhile, my second moth of the year crept into our kitchen a couple of nights ago. I hazarded a guess on the Upper Thames Moths blog that it might be Tortricodes alternella, the nearest resemblance I could find in the Micro-moth Bible. 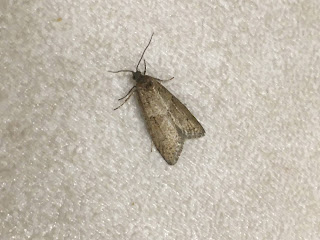 UTM's generous expert Dave Wilton confirmed that I was right; a rather unusual occurrence. Meanwhile I have been disgracefully slow to report on the solitary moth which flew in to the trap the night after my last post, on 29th January. Here it is: a Pale Brindled Beauty, a species of no special beauty or fame but this one has the modest distinction of being my First Moth of 2021. 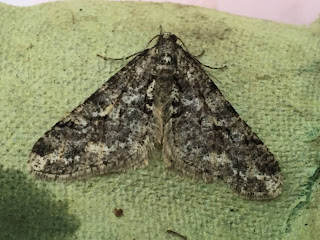 Posted by Martin Wainwright at 15:02 No comments: