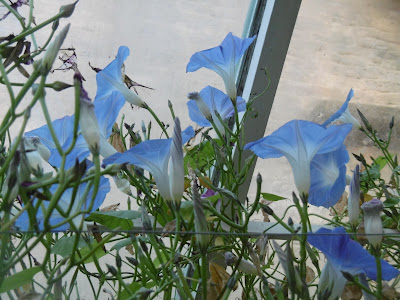 Moth-trapping in current conditions and at this time of year consists of enjoyable but everyday - or everynight - encounters with a handful of December moths. The one pictured today did at least do me the service of demonstrating how its fur-coat is actually an almost see-through garment, at least towards the edge of the wings. But otherwise, I have little to say about them.

Hence the top pictures, first of our wonderfully surviving Morning Glory whose greenhouse home this morning would freeze the whatsits off a brass monkey. (Penny is very interested in the etymology of that phrase and apparently inaccurate attributions to naval warfare - see here).

Blue being my favourite colour, I also can't resist posting these pictures of one of our many jays. Returning to the world of myth and allegory, the contrast in this bird between physical beauty and an awful, jarring voice, or call, is indeed striking. Alas, I have known human counterparts. 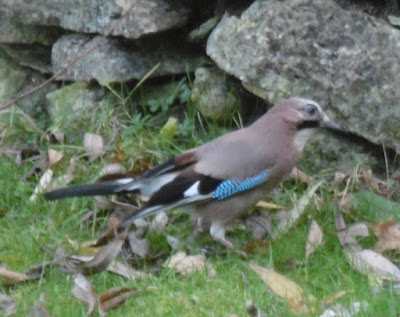 Sorry for the dodgy focus, but these were taken from quite a distance and through our kitchen window.  And so to the moth. Here he is: 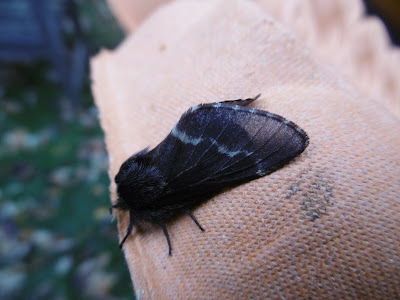 Posted by Martin Wainwright at 08:36 No comments: 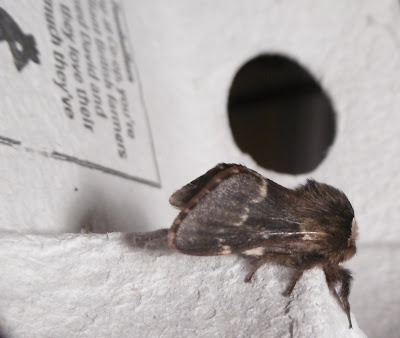 For the umpteenth time, I am very grateful to a Commentor on the blog - in this case Richard, who pointed out that the 'November/Autumnal Moths' which featured in my last post were in fact Winter Moths. They made a change from the solitary predictable regular in the trap at this time of the year, the December Moth, which appears in the first two pictures here. 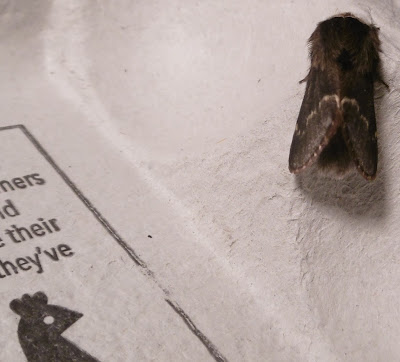 Because it's a very dark moth which often photographs poorly, I took this one inside this morning and snapped it under our most powerful table lamp. The sudden fierce light and warmth had no effect whatever on its deep sleep at 7am. I know how it feels. 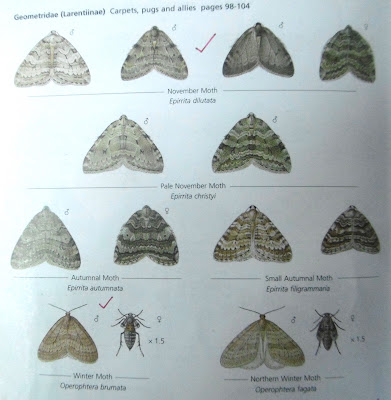 On the Winter Moths, here they are in the Moth Bible, on the same page as the ones with which I muddled them. I have long ago given up hope of getting differences such as this right. I tend to go on colours and patterns and these are too similar for my limited detection powers. The easier difference is the size - Winter Moths being smaller - and to some extent the wing shape. November Moths are a little more pointy.

It's good to have the Winter Moth recorded for 2016 - the ones in the post below are my first of the year - and it's also a most interesting moth. Its equivalent of blood has an element of anti-freeze and it takes half-an-hour to warm up enough to take wing. Read more, if so inclined, from one of my earlier posts on the subject here.


Posted by Martin Wainwright at 19:23 No comments:

Kitchen moths - and a political starlet

This has been a good year for 'celebrity moths' which take it upon themselves to intervene in major human events. We had another example yesterday when an insect took an interest in Theresa May's speech to the Confederation of British Industry. "A moth!" I cried to Penny as we dozed in front of the evening TV news. Actually, although it jinked about in the fierce lighting like a moth, I am sure that it was a butterfly, either a Small Tortoiseshell or a Peacock.

As I've mentioned here in the past, these butterflies enjoy a superstitious value in the theatre world, where their appearance at a premiere is supposed to portend good luck. I hope that this is the case but the explanation is more prosaic. These two species are great hibernators in the UK and the cracks and crannies of old theatres, and especially those vast and usually folded stage curtains, make a perfect place for a winter sleep.

In the kitchen, meanwhile, Penny had earlier let out her own cry of "Moths!" when no fewer than six Autumnal or November moths (Update: or were they? See end of post) settled on the outside of the windows to watch her making spaghetti. Her are some reflective shots of my attempt to record them all: 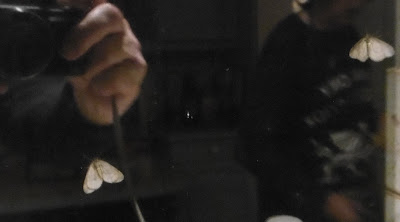 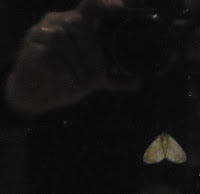 I hadn't been going to light the trap because of heavy rain forecast overnight, but this little invasion prompted me to do so. I prudently switched it off at 11pm when it was still dry and - relatively - warm. I was wise to do as the rain duly came in the wee, small hours. 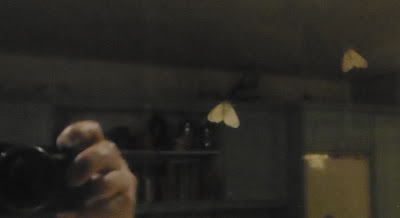 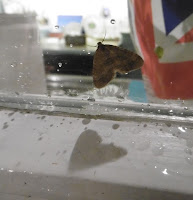 The only other thing that came, in trapping terms, was a nice December moth, shown at the foot of the post. Interestingly, although the trap was within 50 yards of the kitchen window, none of the Autumn/November moths flew over to investigate. Mind you, no one was making spaghetti in the trap, so there was less for them to see.

Update:  many thanks to Richard in Comments for pointing out that the visitors were not Autumnal/November Moths but Winter Moths, my first this year. More on this in the next post, but many thanks, Richard. Posted by Martin Wainwright at 08:19 2 comments:

Let there be light! 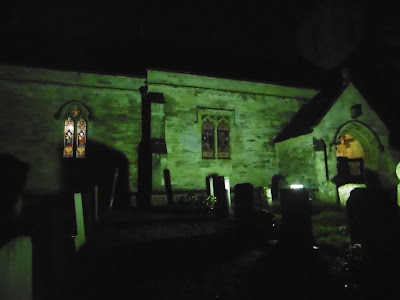 The primary purpose of a moth trap is...well, obviously, to catch moths. But they can come in handy for other tasks. On Saturday, 3rd December, for example, we're helping launch a group called the Friends of Holy Cross at Shipton-on-Cherwell.  The lovely little church, well known to walkers along the Oxford canal or the circular path via the romantic, ruined manor house of Hampton Gay, will be floodlit at 7.30pm.

Floodlit? Mothtrap-lit, to be more precise, probably with a bit of help from the narrowboats which moor nearby. My top picture is of a successful experiment tonight. On the evening, when it will be later and darker, the effect should be better still (and maybe a little less green. I think that was the camera).

In its workaday role, meanwhile, the trap played host to the two Sprawlers above, one December moth and the fellow at the bottom which I think is a rather battered and careworn Lesser Yellow Underwing. Or is it a Square-spot Rustic? I don't really mind either way.

Posted by Martin Wainwright at 19:27 No comments: 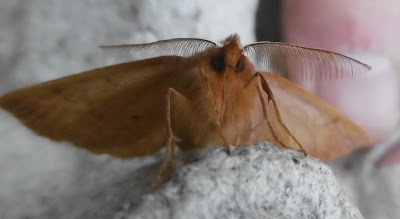 The great big Supermoon was obscured by cloud last night in true British fashion, but this may have brought a small bonus in the form of these two moths. One of the theories of the attraction (or distraction) of bright light for the insects is that they are all trying to get to the moon. In its absence, a mercury vapour moth trap is the next best thing. 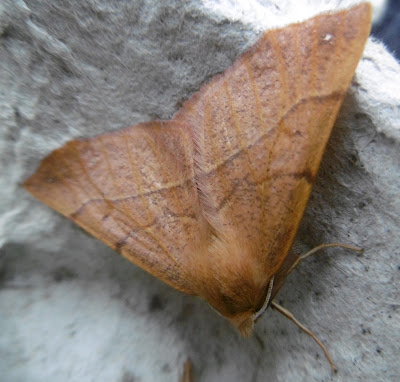 The gentleman with the beautiful antennae is a Feathered Thorn, one of the late-in-the-year regulars here. His companion is one of the four Autumnal or November moths whose indistinguishability without dissecting genitals - not my cup of tea - has often been lamented here. For all that, it is a moth whose modest patterning and shy colours can lead to its being unjustifiably overlooked. 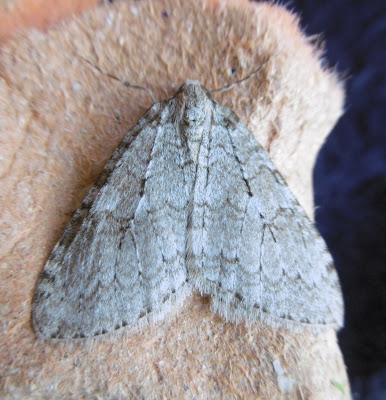 Posted by Martin Wainwright at 16:17 No comments: 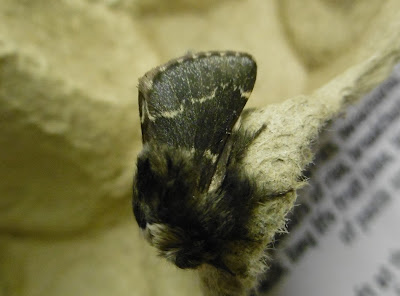 One of my favourite moths, and almost certainly the last newcomer for this year, was sleeping in the eggboxes this morning. It had been a foul night and even the simple but highly effective rain shield devised by Mr and Mrs Robinson, inventors of my moth trap, had not been able to keep the rain out. The bottom of the big black bowl was awash and several boxes resembled small ponds. Luckily my moth was high and dry above the flood. 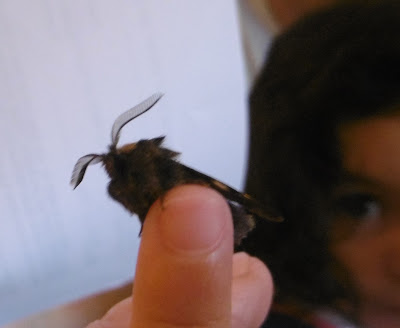 It is a December Moth, a handsome flyer very late in the year which appropriately wears the moth equivalent of a fur coat. My grandparents' generation was probably the last in England to wear furs as a matter of course, animal welfare counting for rather less in those days. Now that synthetic versions are pretty much indistinguishable, I'd like to see them being worn again. In wintertime, they look cuddly as well as good.


The December moth is a relative of the Eggars, rich-brown coloured insects familiar to most schoolboys who bred their caterpillars and those of their cousin, the Drinker. The latter were easy to find as come early evening they crept up grass stalks to sip at the early dew, hence their name.

The moth was extremely welcome as my granddaughter also came to stay last night and she has a touching faith in my ability to serve up some interesting moths for her inspection in the morning. I was prepared for my reputation to be sullied after a couple of completely barren nights on the trap's most recent excursions. But as well as the December moth, there was also a pretty Green-brindled Crescent (below). She approved of them both. Observe her approving eye in my second picture. 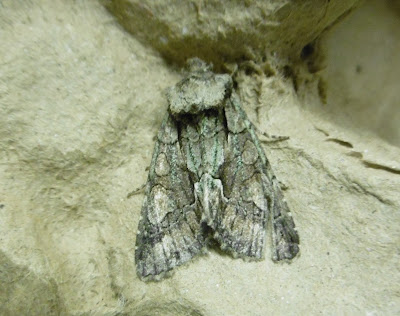 Posted by Martin Wainwright at 18:13 No comments: 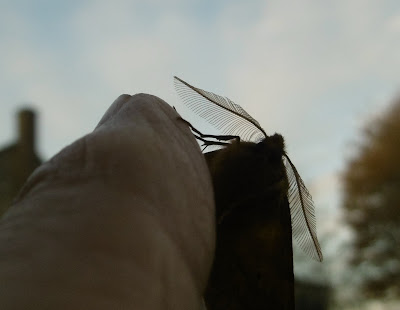 I was pretty much convinced this morning that the trap would be empty again. Although last night was a little warmer, the frost returned during the small hours and the lawn was rimed with white when I tip-toed out at 7am to turn off the lamp.

Sure enough, the first 20-odd eggboxes were barren. But then - hooray! - I found a handsome Feathered Thorn sound asleep in the 21st, its russet, foxy colouring going well with the fading lemon yellow of the box.

You can see from the top picture why it is called 'Feathered' - those delicate antennae are one of the glories of the insect world which are denied to us mere humans. The nearest we get, I suppose, are eyebrows. The late Denis Healey's Darwinian ancestors must have included a moth.

The antennae are exclusive to the male (I don't recall Edna Healey's eyebrows, similarly) and he is much more likely to come to light than his mate. 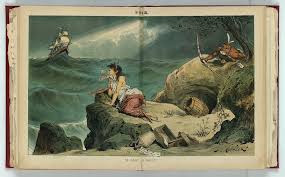 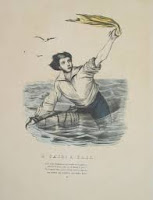 The discovery put me in the cheery mood of shipwrecked mariners whose cry "A sail! A sail!" filled my childhood imagination with exciting notions of Robinson Crusoe and the Spanish Main.  A Feathered Thorn is not quite in that league, but at this time of the year it is a pleasure to play host to any moth.
Posted by Martin Wainwright at 09:15 No comments:

No one at home 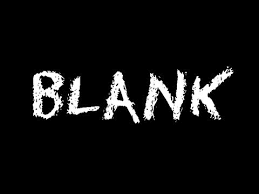 For the first time in ages, the trap was empty last night. Not a soul in the eggboxes after freezing temperatures and a lot of Guy Fawkes noise and smoke. Hence my illustration.

I have some news, however. Driven by the lack of moths to a spell of statistics, I counted up the number of species (including three very distinct varieties) in my list of moths which have visited me here and in Leeds. In December last year, it stood at 364. Now it is 383. Onwards to 400? Maybe next year.


Posted by Martin Wainwright at 22:29 No comments: 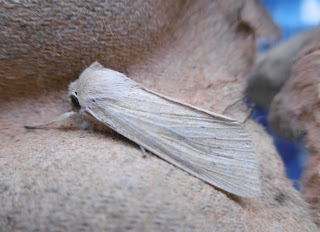 Things really are getting a bit fag-endish now (though I hope that if I say that, the moths may lay on a few fireworks when I put the trap out for Bonfire Night). Not many more regular species remain to make their debut for 2016 although one of them, the December Moth, always fills me with happiness when I sit in slumbering away in its chocolatey fur coat.


Today's moth is a Large Wainscot, although actually not a particularly large one. Otherwise, there was little of interest in the eggboxes, although Ben's correction of my mis-guess in the last post means that I have another completely new species in my garden records: the micro-moth Eucosma obumbratana. 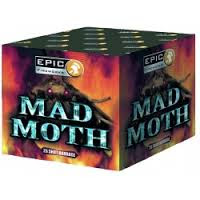 Posted by Martin Wainwright at 14:43 No comments: