Hi everyone and I hope that you have a great Christmas and all warmest wishes for the New Year. 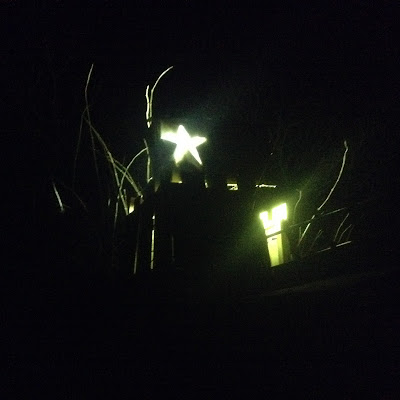 I'm giving the moths a seasonal bit of excitement by converting the trap into a Christmas illumination. No neighbours have yet complained; in fact those I've spoken to about it have been touchingly complimentary. And the moths are still taking an interest as well.  I'd pretty much given up on them for the year, but in the first two nights of the amazing new Star Trap, I've had firts a solitary Winter Moth and then last night a Mottled Umber and another Winter Moth - although the latter could be a Northern Winter as it's showing rather more petticoat than usual, which is one way to distinguish the NW from the plain W. Its pic is next, followed by the Mottled Umber. 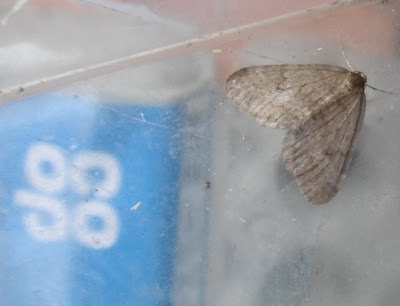 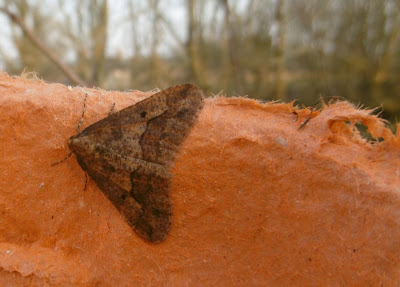 It's interesting to see how much dew collected on the first Winter Moth, apparently without affecting its health or happiness (pic below). Moths' wings must have a similar effect to bird feathers and sheep wool, shrugging moisture off rather than absorbing it. 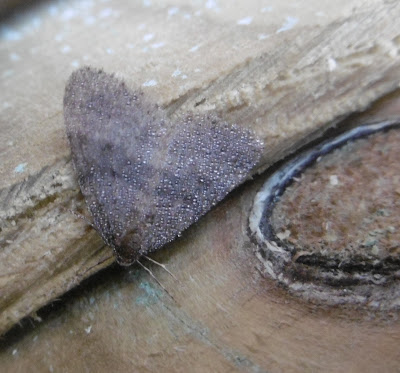 Finally, here is a Christmas message from my moths:

Hello humans! Your Christmas is here
But you won't see many of us
It's not that we mind this time of the year
Or get fed up with the fuss.

No. The Creator with infinite skill
Has designed our lives this way:
We're eggs or pupae now and we will
Remain asleep 'til the day

When the morning sun brings warmth once more
And birdsong fills the skies
Then like the babe in the manger poor
We'll return, take wing and arise!

Have a great time!

Posted by Martin Wainwright at 12:35 No comments: 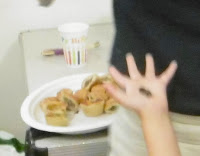 Yesterday saw the birthday not only of the granddaughter - a famous friend of moths - but her Mum, who isn't over-keen on insects of any kind. Bound for their party, I faced a dilemma: whether to take a moth for the little one (assuming that anything had arrived in the trap), or not.

In the event, I did, as grandchild's enthusiasm is greater than Mum's polite preference for avoiding moths where possible. Thus a small piece of insect distribution was carried out in the form of a neat and helpfully sleepy December Moth which travelled down the M40 in a plastic butter carton, joined a very noisy party for about five minutes and then winged it into the London dusk.

"Grandpa, are you a little bit sad that the moth has flown away," asked the tot, who was very pleased with the brief encounter after a hectic and excellent session of games with her friends and an entertainer in the guise of the famous Princess Elsa from Frozen. Mum played gamely along too, when the tiny visitor was shown to her before it scarpered - top pic.

Otherwise, it was nice to see this pretty micro below in the eggboxes. I need confirmation but it looks to me like Epiphyas postvittana or the Light Brown Apple Moth.  First identified in 1863, this minute species made it to the UK from Australia via marine cargo in the 1930s and is now thoroughly at home. 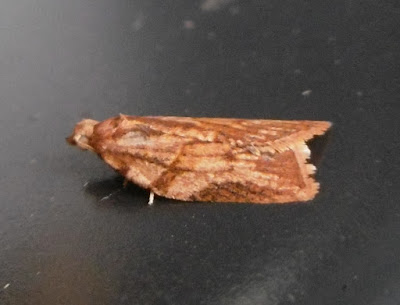 I should be annoyed up to a point, as it is a major pest of apple trees and we have one. But it's so nice to have mothy company in mid-December that I forgive it. I'm also pleased that my current moth visitor book exactly tallies with that superb guide to moth ID, Hants Moths' 'Flying Tonight' web page. Its top four at the moment are Winter, December, Mottled Umber and Light Brown Apple. Ditto here. 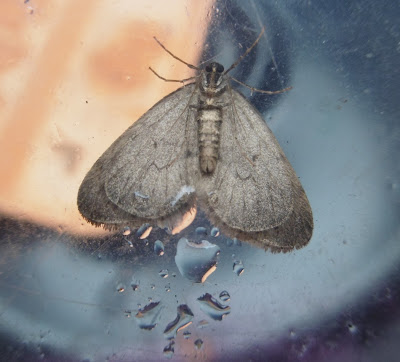 Finally, here is the other eggbox occupant, a Winter Moth, from below.
Posted by Martin Wainwright at 08:02 2 comments: 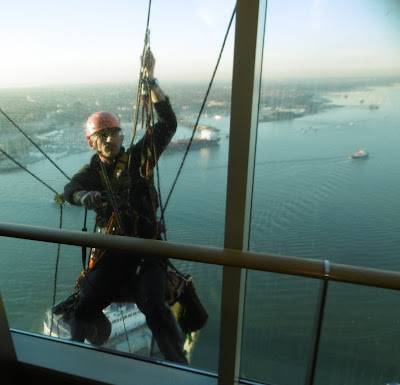 Christmas is only two weeks away but we still have Morning Glories flowering in the greenhouse and yesterday morning, after a very mild night, the trap boasted a new moth for the year. The reason I have illustrated it with my photo of the heroic window-cleaner at the top of Portsmouth's Spinnaker Tower, which P and I much enjoyed visiting two weeks ago, is that it has an equally daring caterpillar. 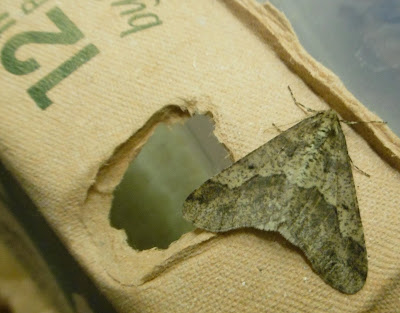 The moth is the Mottled Umber, by no means rare - indeed the excellent Garden Safari website notes dryly: 'Where there are trees, there will be Mottled Umbers' - but interesting, not only for the carefree variation of its markings, which would make it hard to identify (certainly for me!) were its flight period not limited to the Winter months when not a lot else is on the wing. Mine (above) is a very standard version. Some have virtually no lines or speckles at all.

So why is the caterpillar daring? Because when alarmed while feeding on a leaf - basically all that caterpillars ever do normally - it jumps over the side and dangles from a long, spider-like spool of thread. When it perceives the danger to be over, it swarms back up again and gets on with its breakfast, lunch or tea.

The other curiosity about the Mottled Umber is the sadly flightless state of its females - thanks to www.alamy.com for the picture, left. Just as a caterpillar's life is concerned entirely with food, so is that of a female moth with producing young. In her severest mood, Nature has decided that this need not involve the power to fly. Breeding in Mottled Umbers is not a romantic affair. The only compensation is that the female is a little more attractive than some of her flightless compadres among UK moths. But not much. 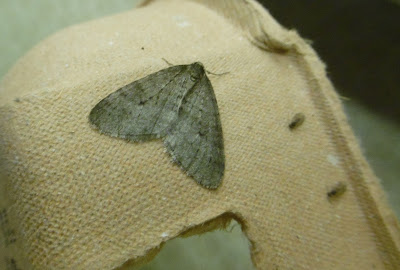 Otherwise, the moths marked my granddaughter's birthday with one Winter Moth, above, and two December Moths in their fur coats. Not bad, so late in the year. Many thanks, moths. 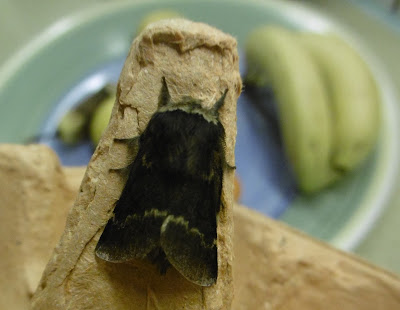 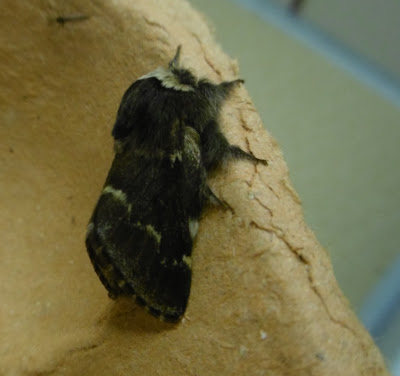 Today's pics have a warmish tone because we had to make an early start and it was too dark outside to take photographs. As I pottered off, there was a cry from P: "Aren't you going to clear away your flies?"  Puzzled, I pottered back and found this scene of devastation on the kitchen sideboard where I had upended an eggbox. Moths may be scarce at this time of year, but there are loads of smaller flying creatures about. 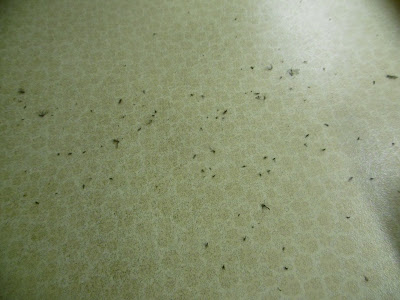 Posted by Martin Wainwright at 08:14 No comments:

Back to my books It's the time of the year when the moth trapper retires to his or her books in front of a blazing fire and tries to work out how many moths have coming visiting this year, and how many of them are new.

I give up on the first calculation, but I can answer the second. As my species total climbs towards 400, the number of novelties naturally falls, but I'm happy with six notched up this year. That does not include micro-moths which have never fitted happily with my amateurish census methods. One day, I hope to include them in the calculations as well.

And I recorded my first Small Dusty Wave down in London. 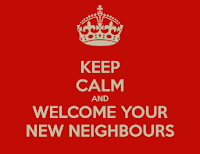 The trap will have a rest for most of the winter but I will fish it out every so often just in case there's something around. And December has a habit of producing mothy stories in other parts of the universe. See you again soon!
Posted by Martin Wainwright at 17:41 No comments: 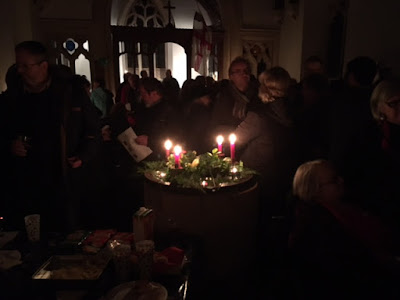 After the rehearsal mentioned the other week, the moth trap had its hour of glory - several hours, actually - last night at the launch of the exciting new Friends of Holy Cross, Shipton-on-Cherwell (please email me on martinswainwright@gmail.com if you have a bob or two to spare).

Thanks to mulled wine, candles and a fantastic turnout of over 80 people, we had a great evening and lots of plans have been hatched - for example, a showing of the canal murder episode of Inspector Morse which was filmed nearby, a book exchange/shelf in the church and summertime cream teas for walkers, who abound. 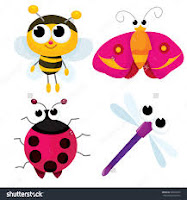 As for moths; well, there were none. It was freezing cold and the trap was turned off shortly before 10pm. Maybe they were all inside with the church's massive, resident population of ladybirds, enjoying the heady fumes of mulled wine.
Posted by Martin Wainwright at 14:57 No comments: