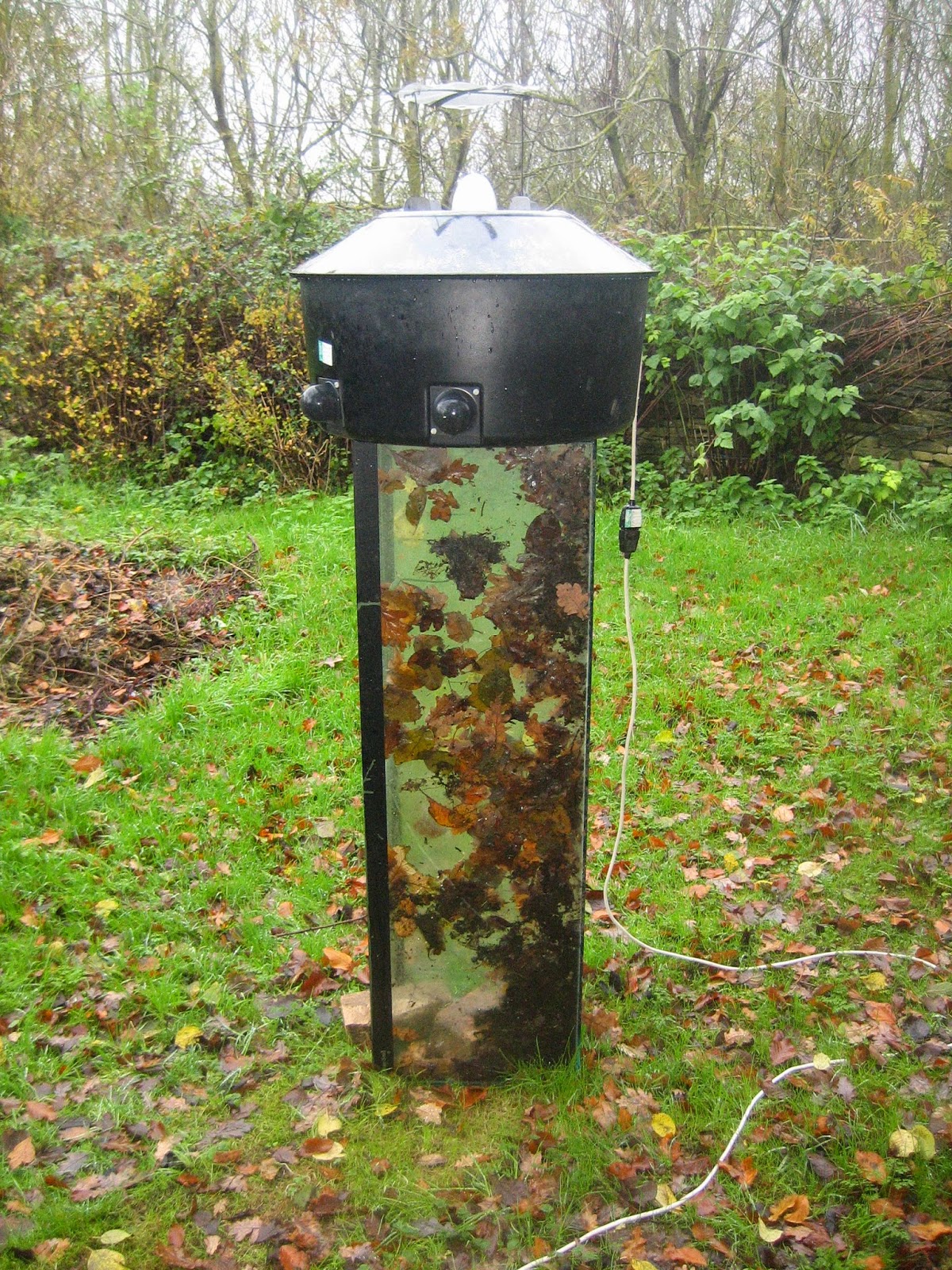 We had some friends staying a year or so ago and when I took them their morning tea, they said: "We didn't know you had a lighthouse so nearby."

"Nor did we," I replied. "Where is it?" Could there really be such navigational aids on the Oxford Canal? When darkness fell that evening, we discovered the answer. Their bedroom on the other side of the house looked out over inky darkness which was lit up at eccentric intervals by a vivid flash. It was a neighbour's wonky security light. 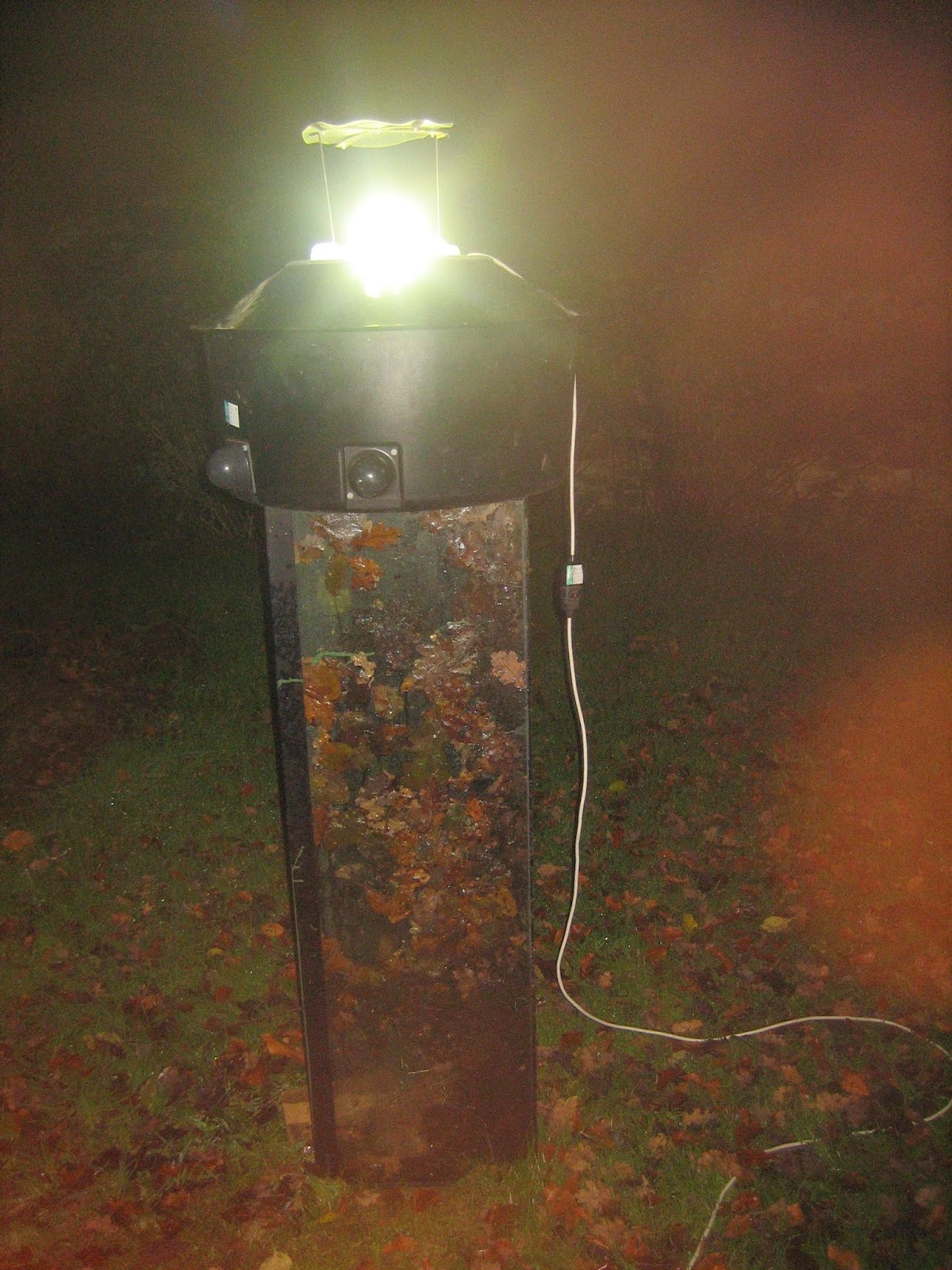 I am not one to complain about bright lights at night, for obvious reasons (though luckily I can mask the trap so that nobody has a direct view of the bulb; at worst they get a rather beautiful, faeriland glow). But the curious structure in my top two pictures, which I have erected in the hope of enticing the unusually large number of rare immigrant moths which are around this autumn (see Daily Telegraph cutting. left), does look like a lighthouse. It's actually an enormous fishtank we inherited (does anyone want one because we don't?), stood on its end.

The weather has played pop with my first two nights of experimenting with this device and I have only attracted one arrival, below. It was definitely brown and so in spite of its vestigial if almost non-existent wing band, I am pretty sure it is my first Winter Moth. 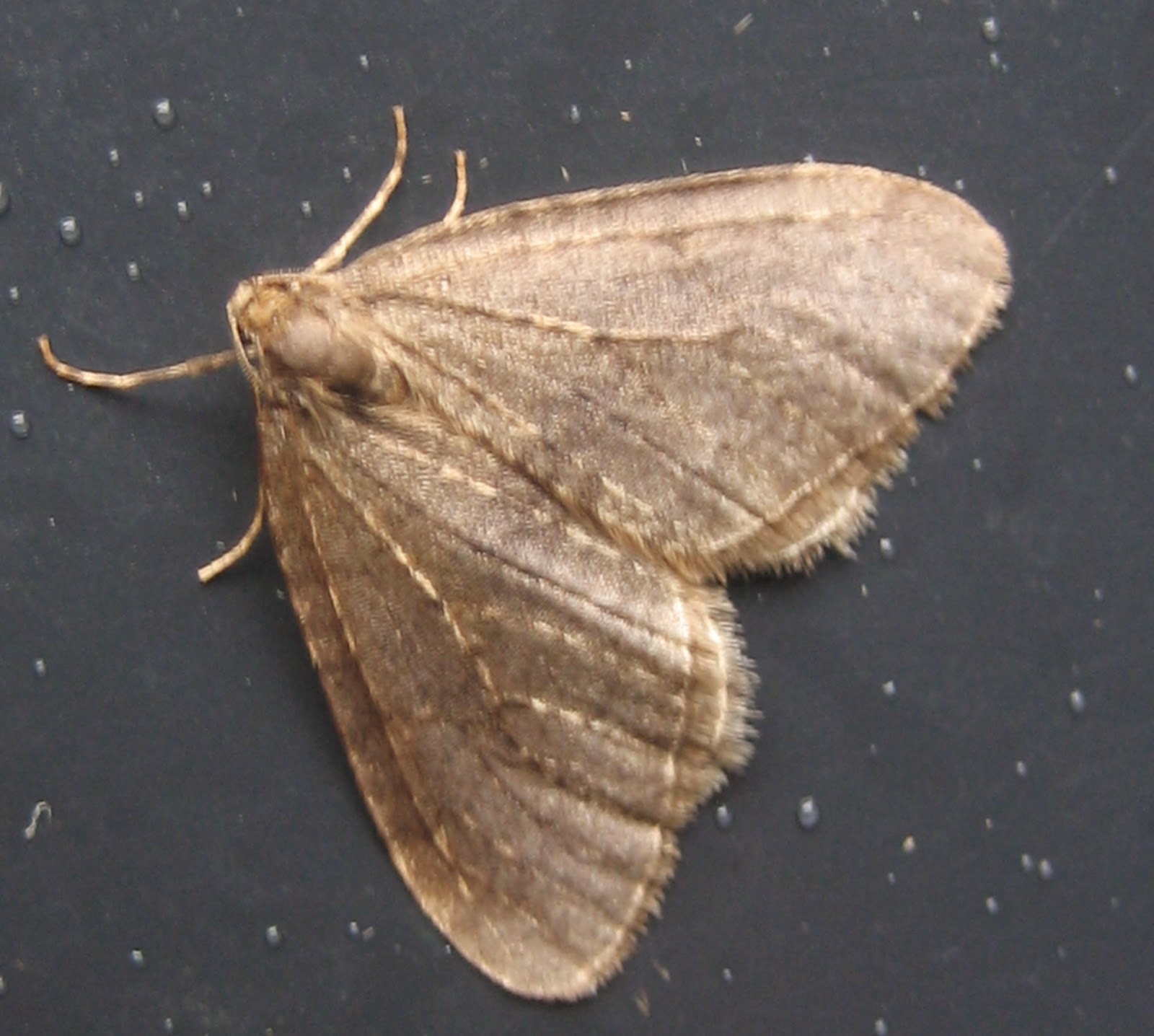 These are the little fluttering creatures which get caught in your car's headlights between now and February when, on the whole, few other moths fly. The species is extremely interesting on account of its equivalent of blood having anti-freeze properties which explain its lonely ability to put up with the cold. Even so, it can take half-an-hour for a Winter Moth to 'warm up' enough to fly.
Posted by Martin Wainwright at 17:29 No comments: 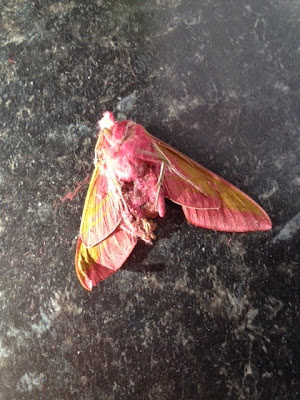 The weather has largely continued wet and/or cold, I've been busy and the trap has been idle. Hence the peace and quiet which reigns here. I'm interrupting it only to record an extremely late-flying butterfly, a Peacock which soared away above an outbuilding at Blenheim Palace where we spent a happy few hours with American friends.

That was at the weekend; and I've seen a dozen more Peacocks since then, but they were all ones either snoozing or disturbed from hibernation by me during our continuing, very long-term sorting out of all our post-move jumble. A more interesting entomological find during this task was the Large Elephant Hawk, above, which was rolled up in a vast piece of maroon fabric which we've had in store for a good few years. Maybe someone was doing some similar Autumn-cleaning at Blenheim.

Judging by its decaying condition, the beautiful moth been doing posthumous service for other members of the insect world. As the doggerel says: Big fleas have little fleas upon their backs to bite 'em. Little fleas have lesser fleas and so ad infinitum.
Posted by Martin Wainwright at 21:49 2 comments: 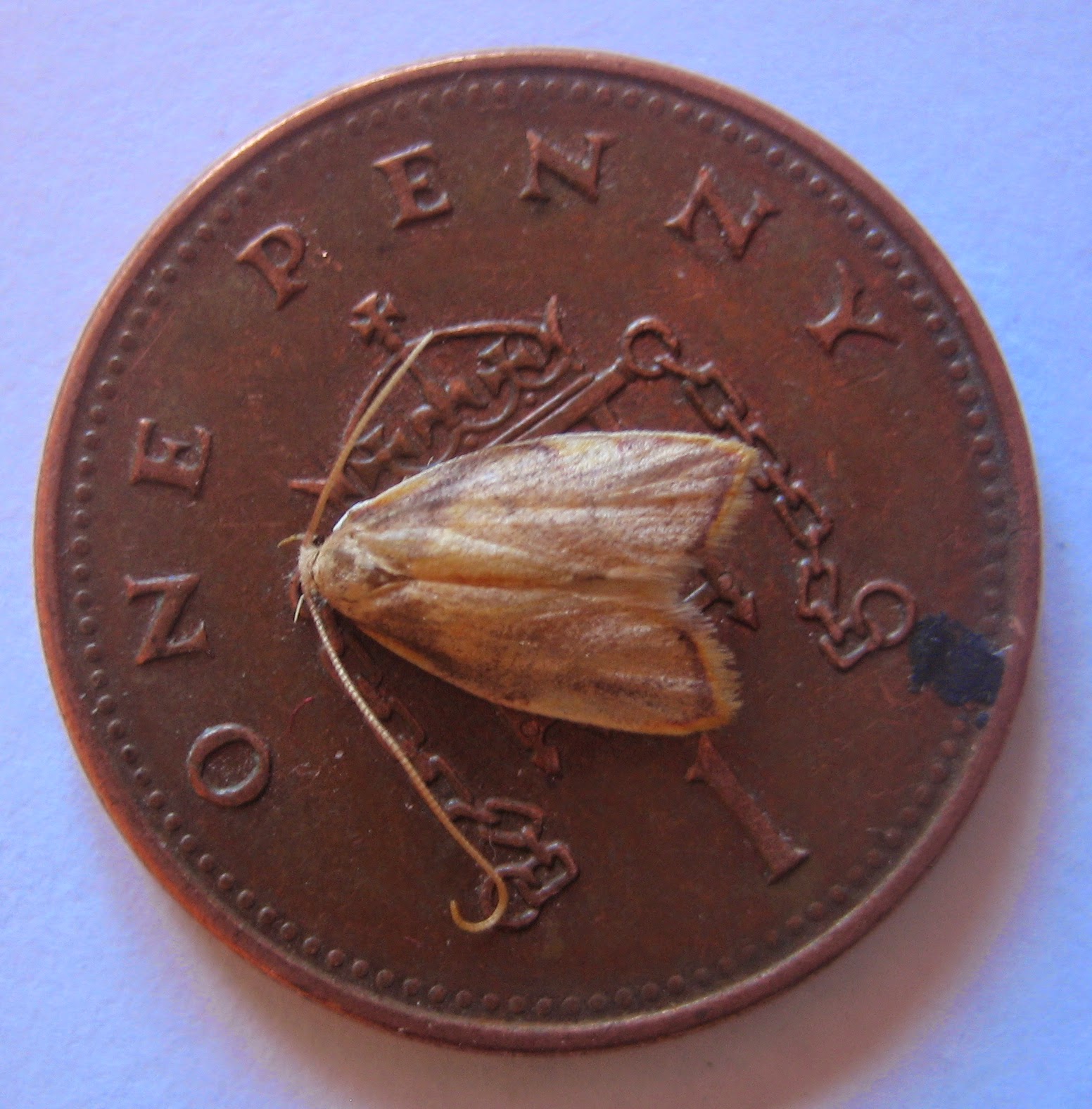 For the first time this year, the eggboxes were empty yesterday morning following a night which saw temperatures fall almost to freezing point. Empty, that is, unless you count the sad little corpse of a lavishly-antennaed micro which I've placed on a penny in the picture in a rare attempt to give one of my photographs scale. I don't know what it is although I think it's been my way before; initially I thought one of the longhorns - Adelidae - but I don't think its antennae are quite that lavish. Here's its underside, in case a micro expert is calling by. An Acleris bergmanniana perchance? That would be my other bold guess. Update: Martin Townsend of the Moth Bible has kindly identified it as Carcina quercana for which I am very much obliged. 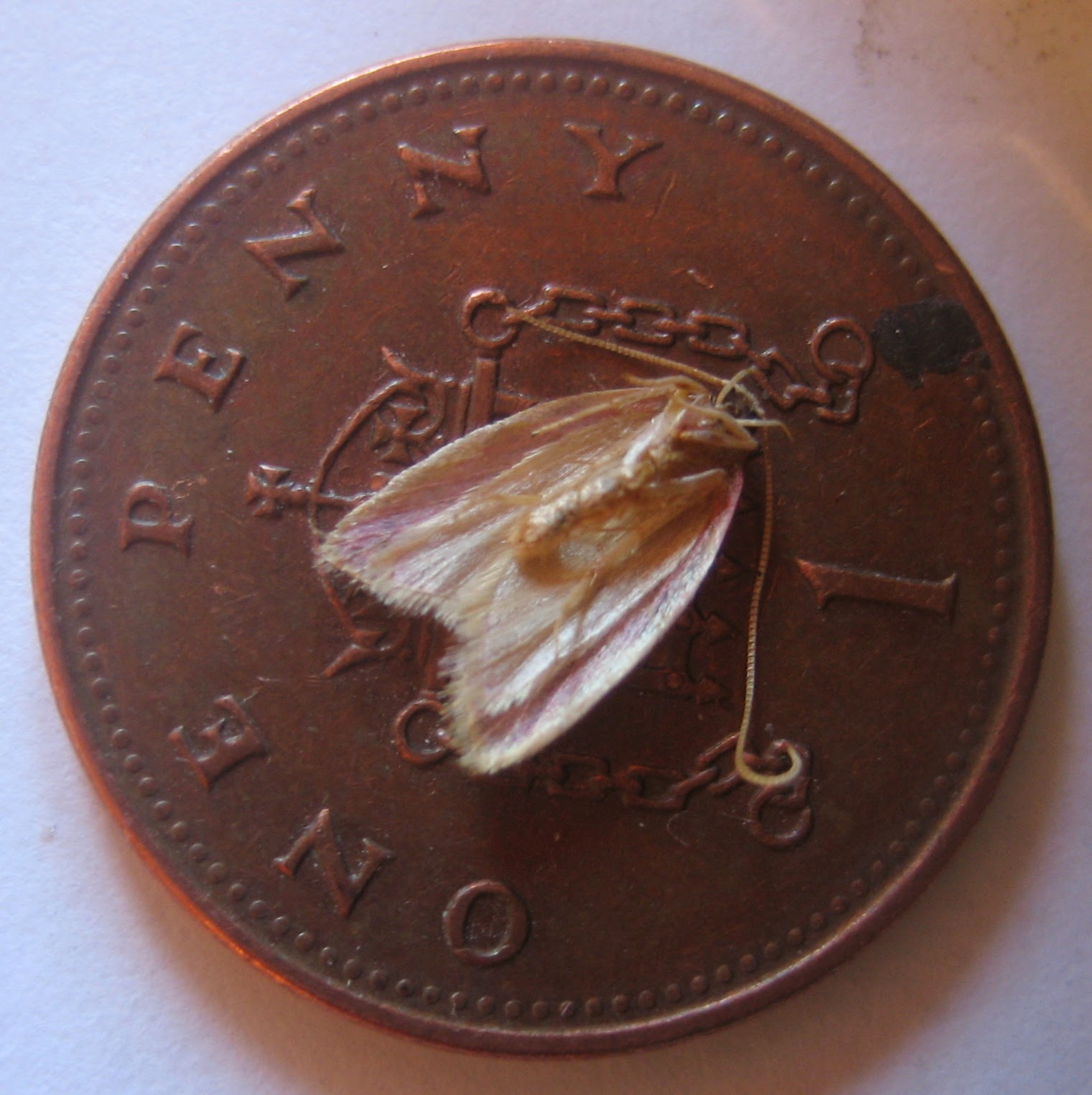 I'm not a social moth-er, in the sense of wanting to gather round the trap in the morning with others, or attend moth-centred discussions with fellow-enthusiasts. But I'm not anti-social either, and it's good to go to a gathering where the enjoyment we get from this hobby is successfully spread to others. 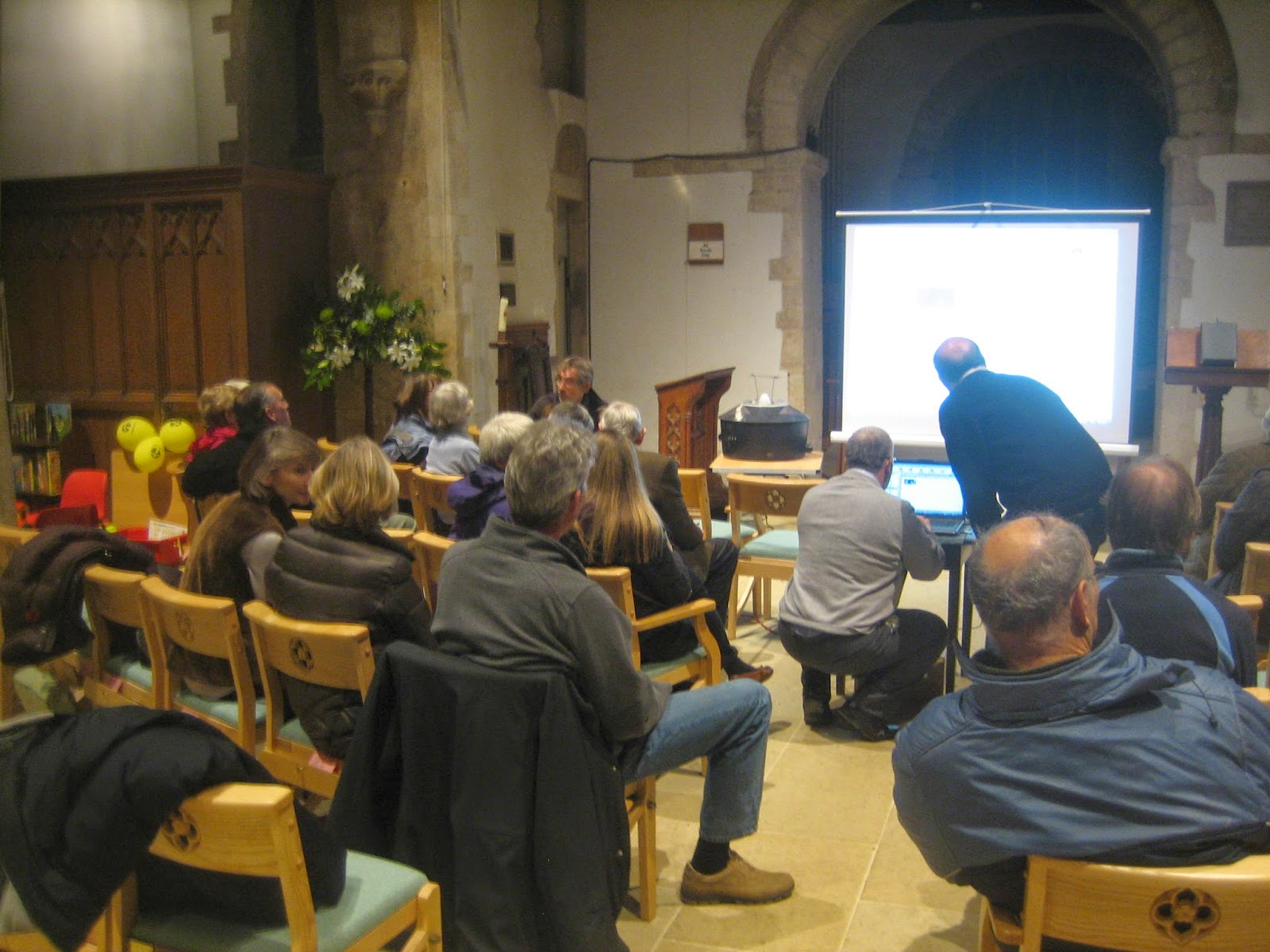 That was the case last night in Kirtlington, where Chris Powles, Martin Townsend and Julian Howe gave an excellent trio of talks with slides on the Great Death's Head Hawk Moth Discovery - see past references here and here. One result next year, I hope, is that I'll be lending my trap to users in both Kirtlington and nearby Bletchingdon to widen its growing tally of eggbox residents. Another nice feature of the evening was that all the animated chatter woke up a hibernating Peacock butterfly which swooped around above our heads and settled on the floor during a very welcome session of coffee, tea and shortbread before we slipped out into the cold and largely moth-less dark.

Posted by Martin Wainwright at 06:20 No comments: 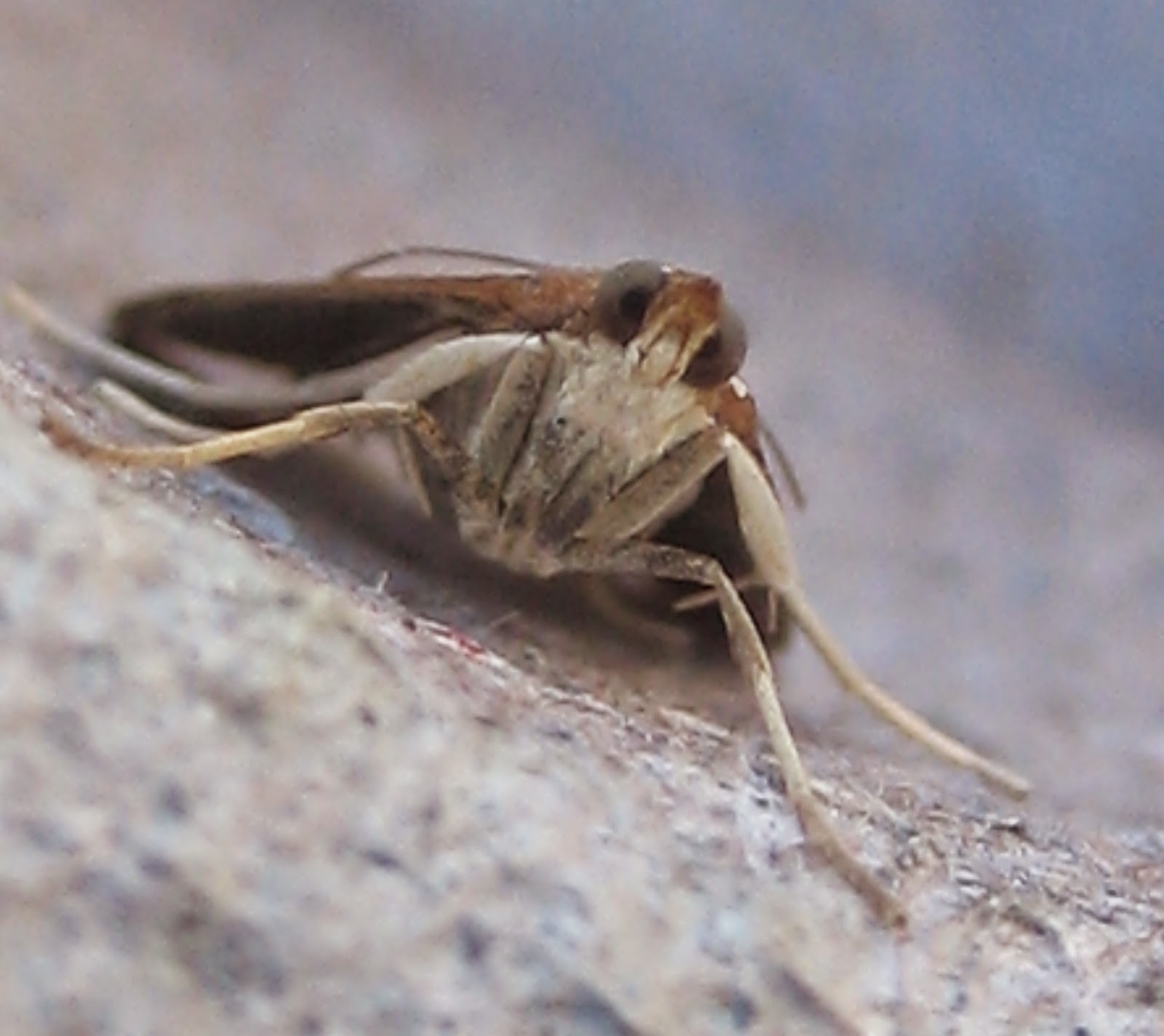 I've got up early today and the garden is still washed by the blueish light of the moth trap, but I am not expecting great things. The experts on the Upper Thames Moths blog are winding down their activities and settling in their armchairs with their lists of records for the Oxfordshire county organisers. The weather has changed for the colder and there will be many fewer moths about. 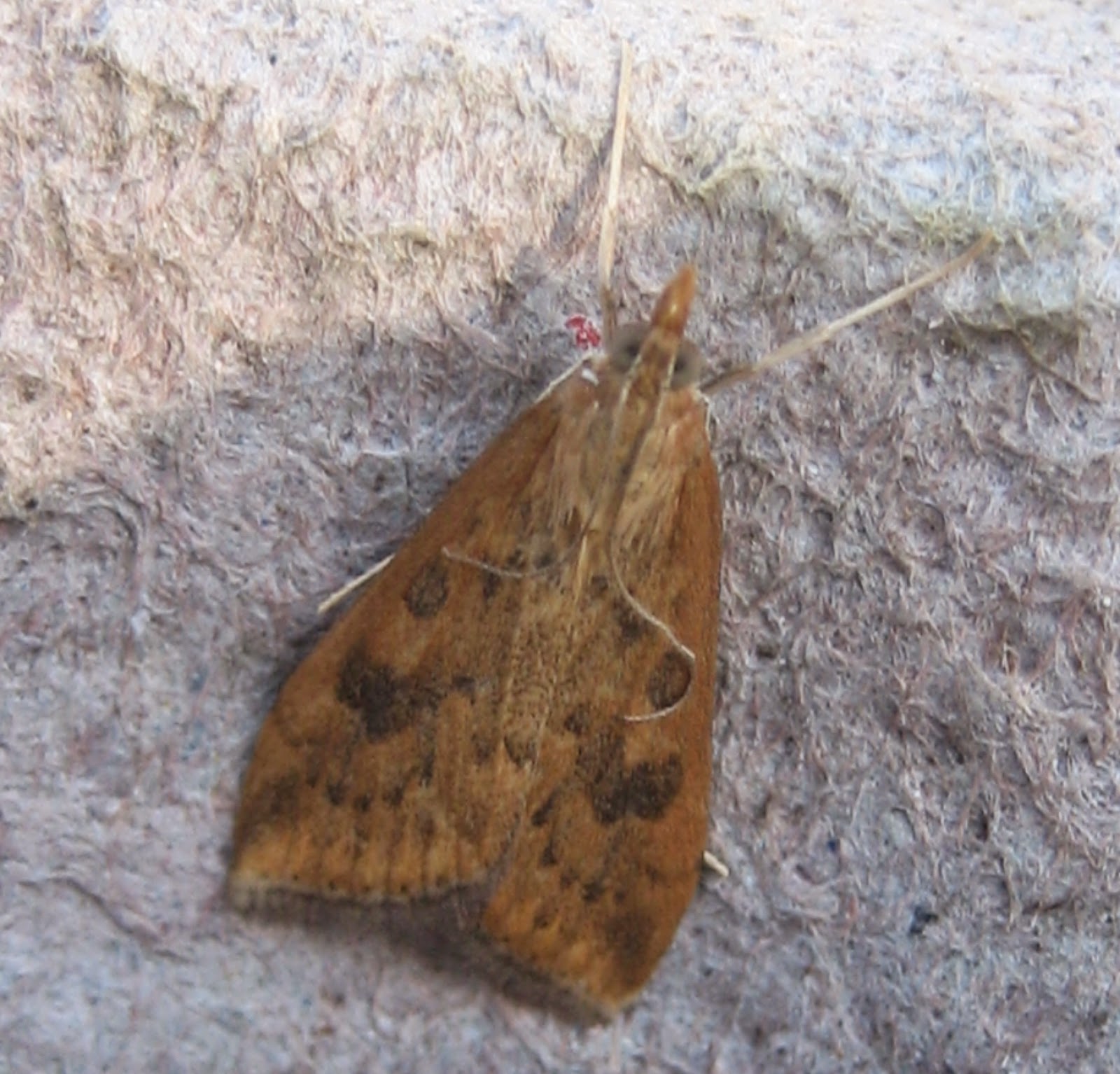 We cannot grumble. It has been a glorious season and the moths shown today - all arrivals within the last week - are exemplars of how long the season has gone on. The Sprawler is a special favourite; Leeds was too fizzy and active a place to have sprawlers. And although the Silver Y has been familiar to me since before my teens, that lustrous metallic gamma mark still fills me with excitement.

The moth shown in my first two pictures is also a late-in-the-year new record for me: the Rusty-dot Pearl micro, known more formally as Udea ferrugalis. A good task for the 21st century, in my opinion, would be the giving of English names to all the country's micros, most of which have to lumber along under Latin or Greek tags (or worst of all, a mixture of the two). However, scientific opinion, influenced by classification and international ease of access, takes the opposite view.

Tiny but tough, the Rusty-dot is an immigrant species, making its own way here from the Continent in the Autumn, abundant in southern England in some years and scarce in others. This year's warm weather and pleasant airstreams from the south have brought plenty of records, and now mine is one of them.

I need more time to identify all these precisely (what's new?) but other tasks beckon. Meanwhile I'm looking forward to the talk at St Mary's church in Kirtlington at 7.45pm tonight on the Death's Head Hawk moths discovery which was undoubtedly the sensation of my mothing year. 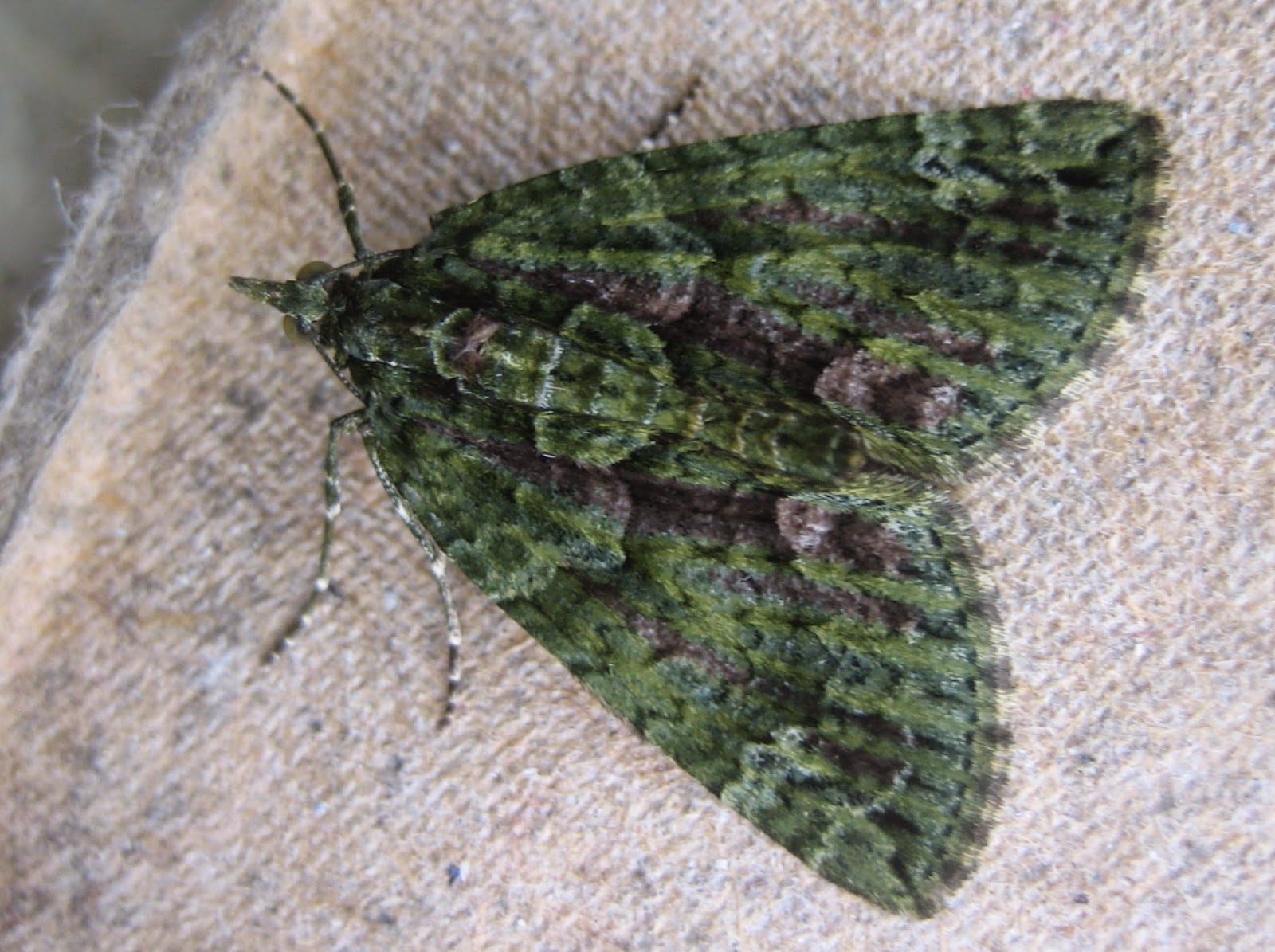 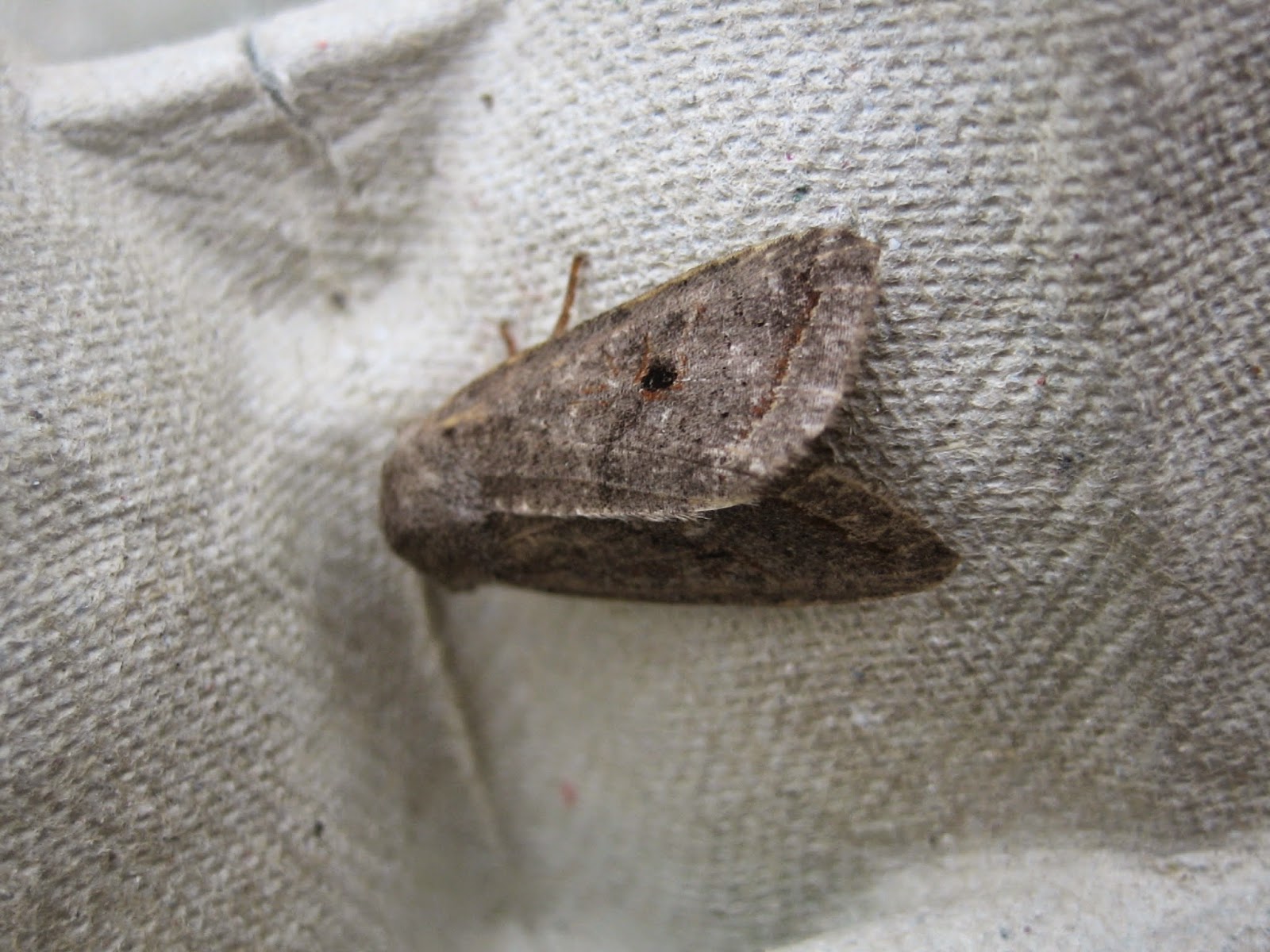 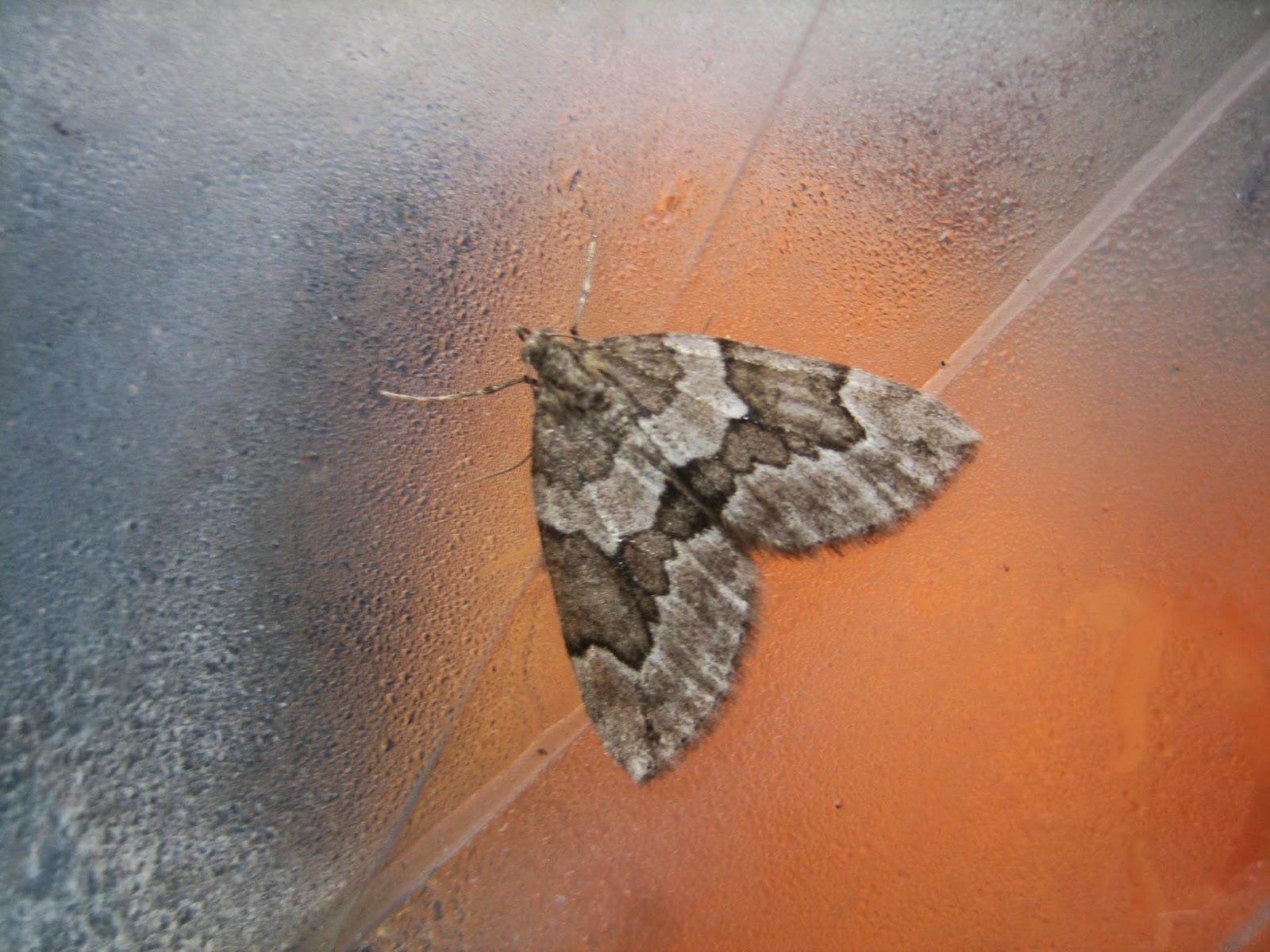 Debates about carpets are probably most associated with young couples furnishing their first home. In my case,  it's the issue of whether the delicate little visitor above and below is a Spruce or Juniper Carpet moth.

I'd assumed Spruce, as the commoner of the two, but the pattern seems to me to be more Junipery. I've asked my expert colleagues on the Upper Thames Moths blog but if anyone here can beat them to a definitive answer, I will reward them with a crayfish (when I catch one). Update: the award goes to Peter in Comments who opts for Juniper, subsequently confirmed by Martin Townsend of the Moth Bible. 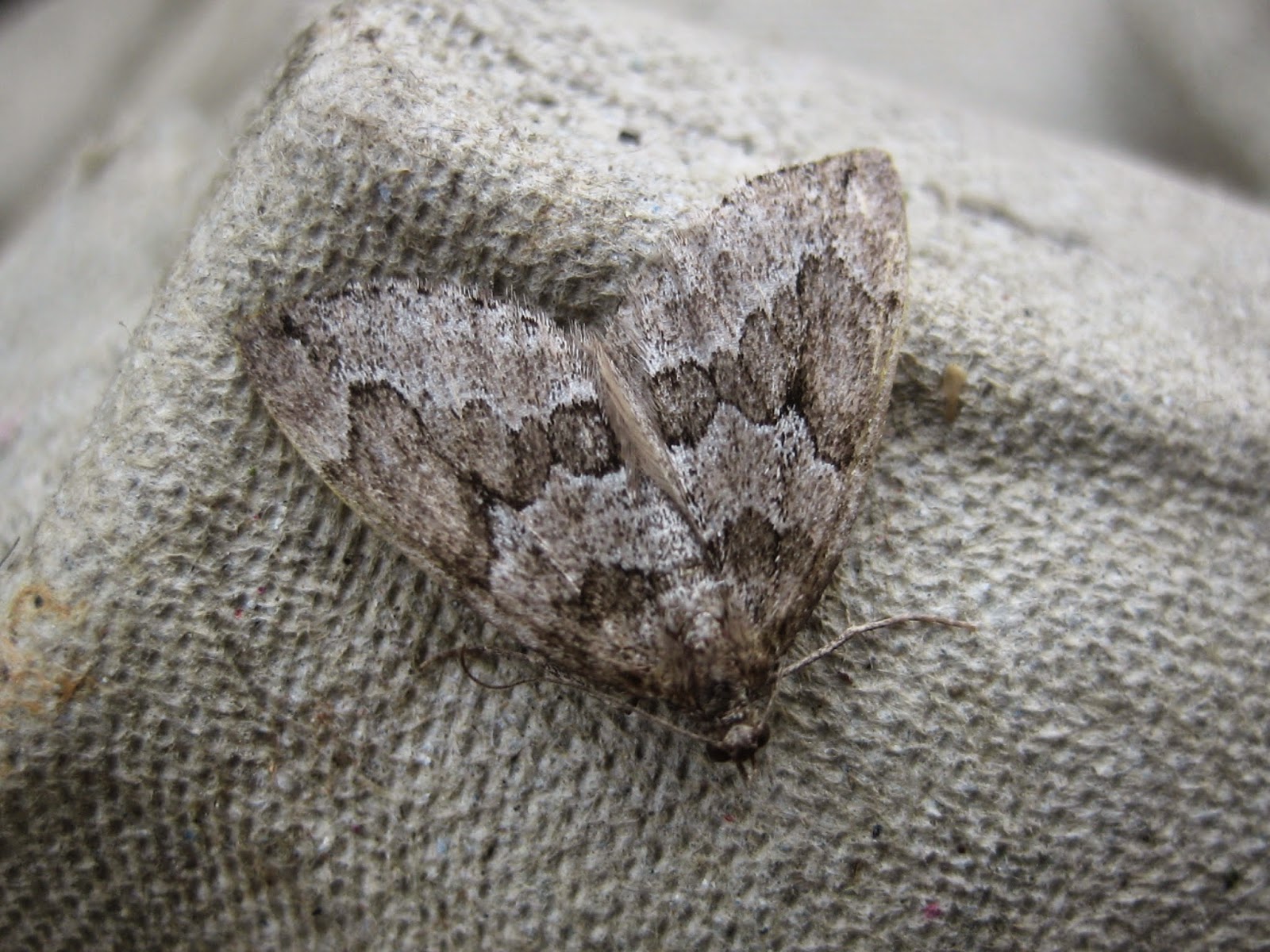 The question got me thinking sideways about trees and the perhaps surprising fact that the Juniper is one of the UK's relatively few native species - 29 in all. As for the Spruce, I had thought that it was named after the famed plant collector and native of Yorkshire (born at Ganthorpe, near Castle Howard), Richard Spruce. But no. The word is a version of 'Prussian' because when they first arrived in Britain in the 17th century, they were thought to come from north Germany. "Whatever's that?" "S'Prusssian." 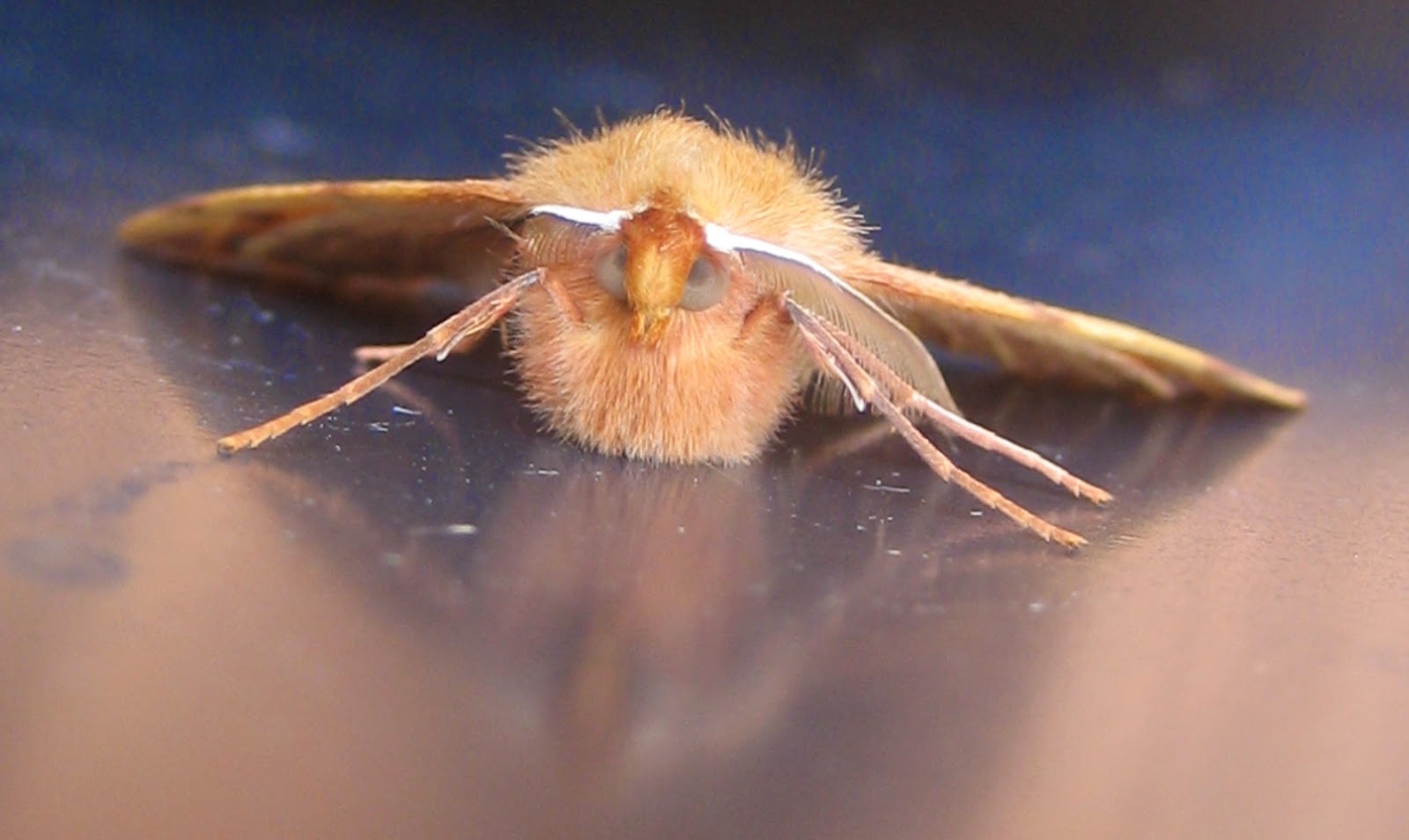 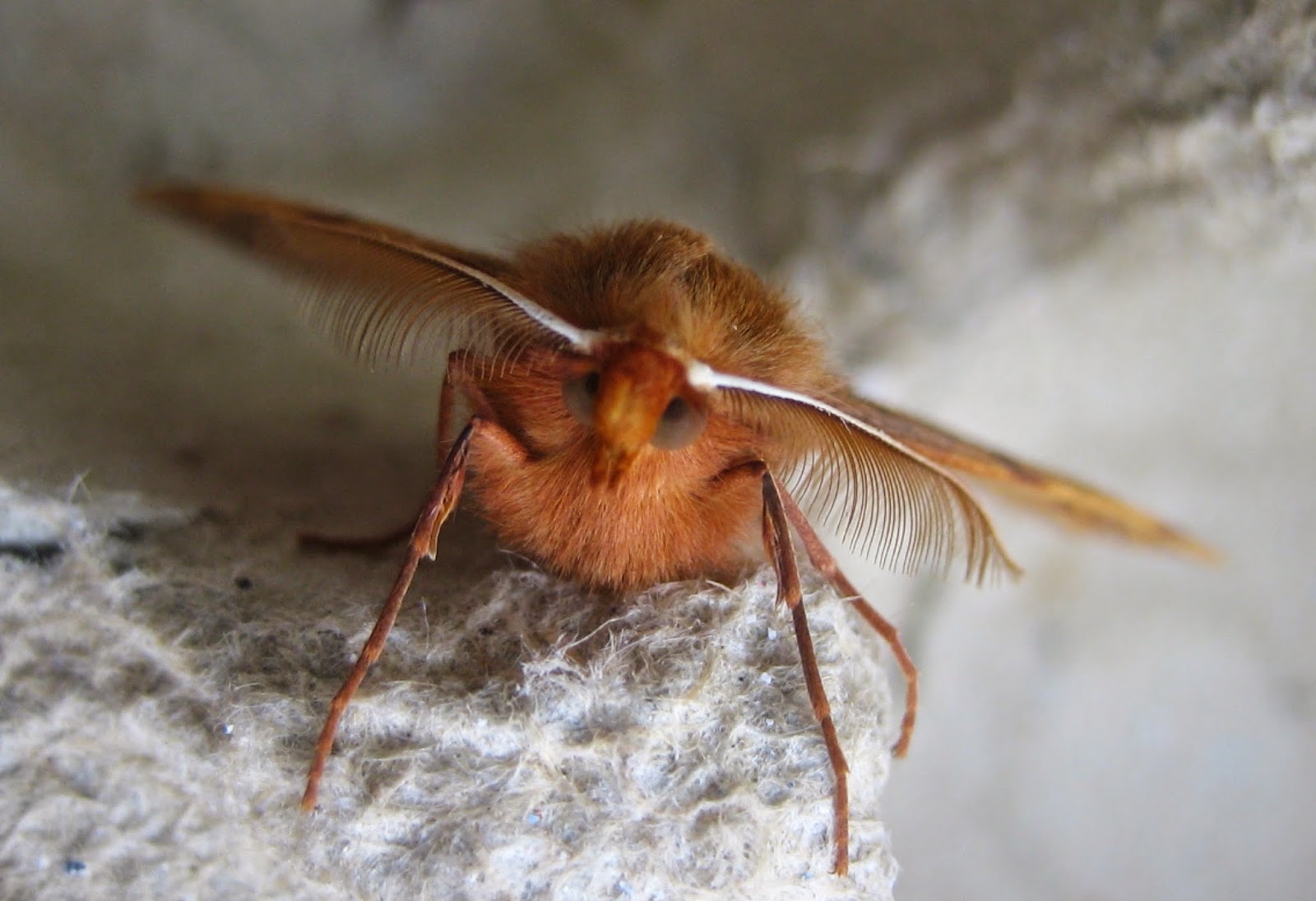 Have you met the Feathered Thorns? This sounds like a line from Agatha Christie or one of those society novels of the 1930s. You know, old Colonel Feathered-Thorn of Cheltenham and his rather delightful wife? 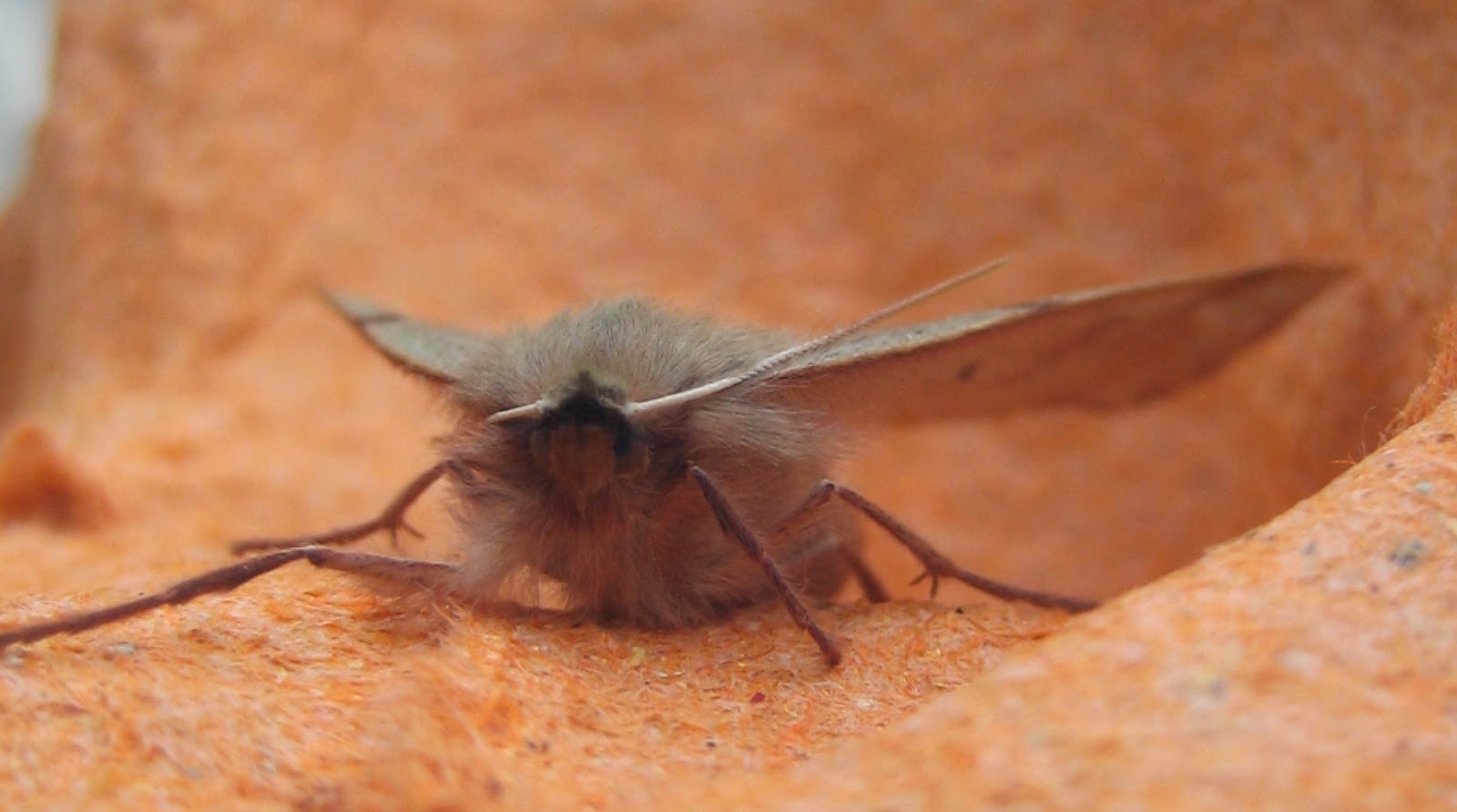 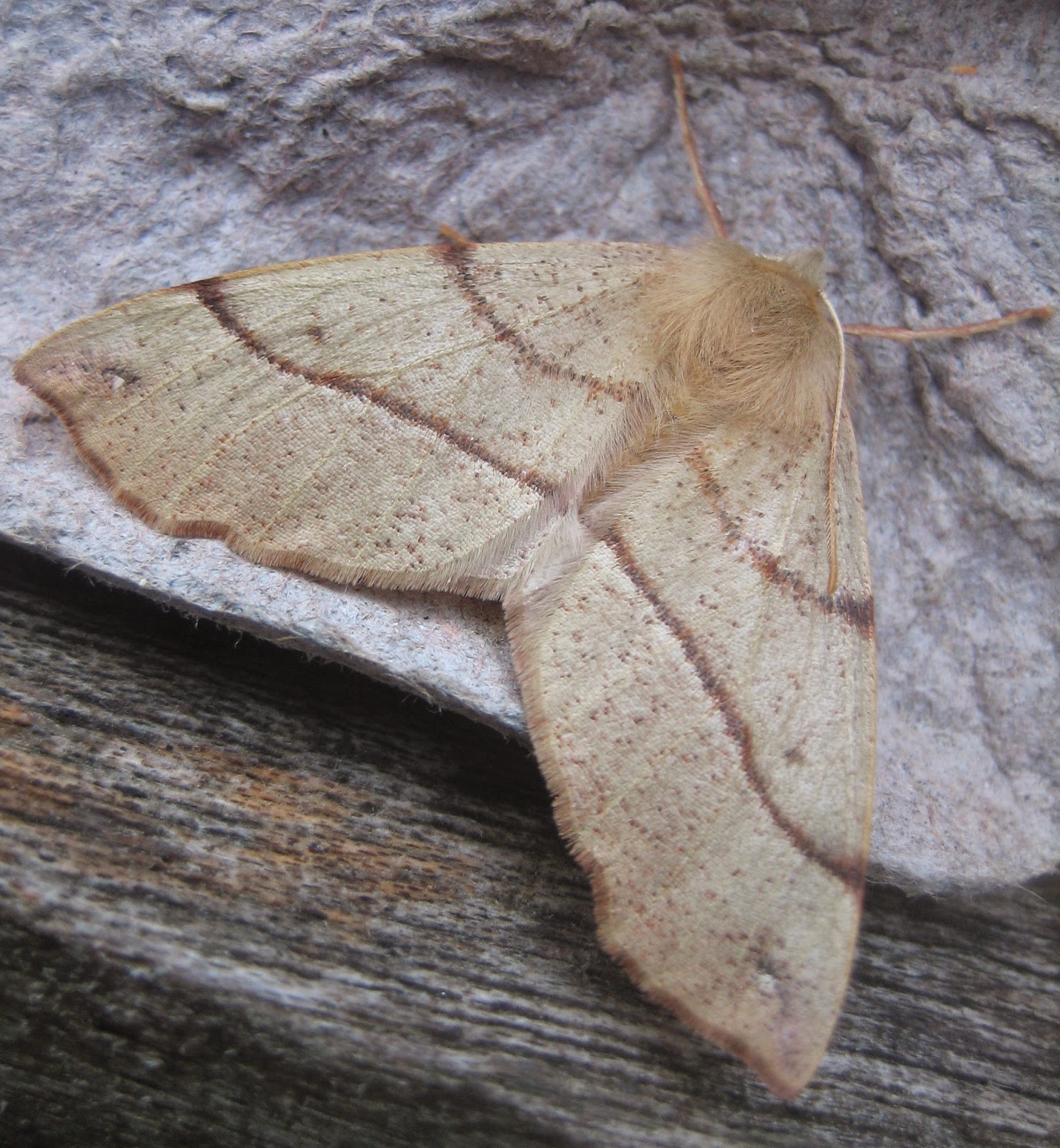 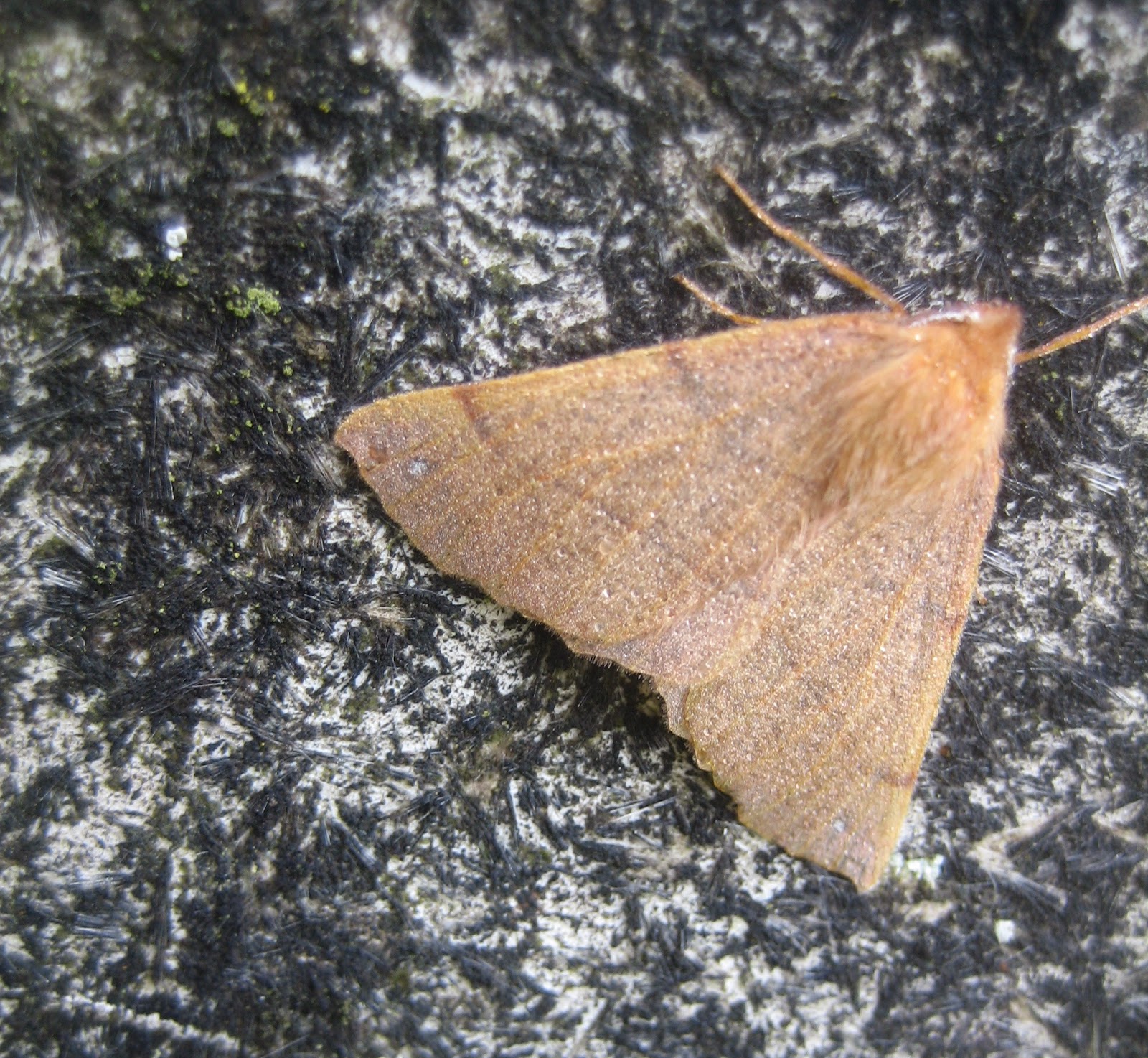 The moths of the same name contribute to such fantasies. Look at the furry, bristly male in the top two pictures. All he needs is a monocle. Those antennae would have the same effect as an imperial moustache and sidewhiskers on morale at the Khyber Pass.  He uses them to good effect to track down Miss Feathered-Thorn and turn her into Mrs. She is a fine moth too, but plainer and with very ordinary antennae, as in the three photographs immediately above. 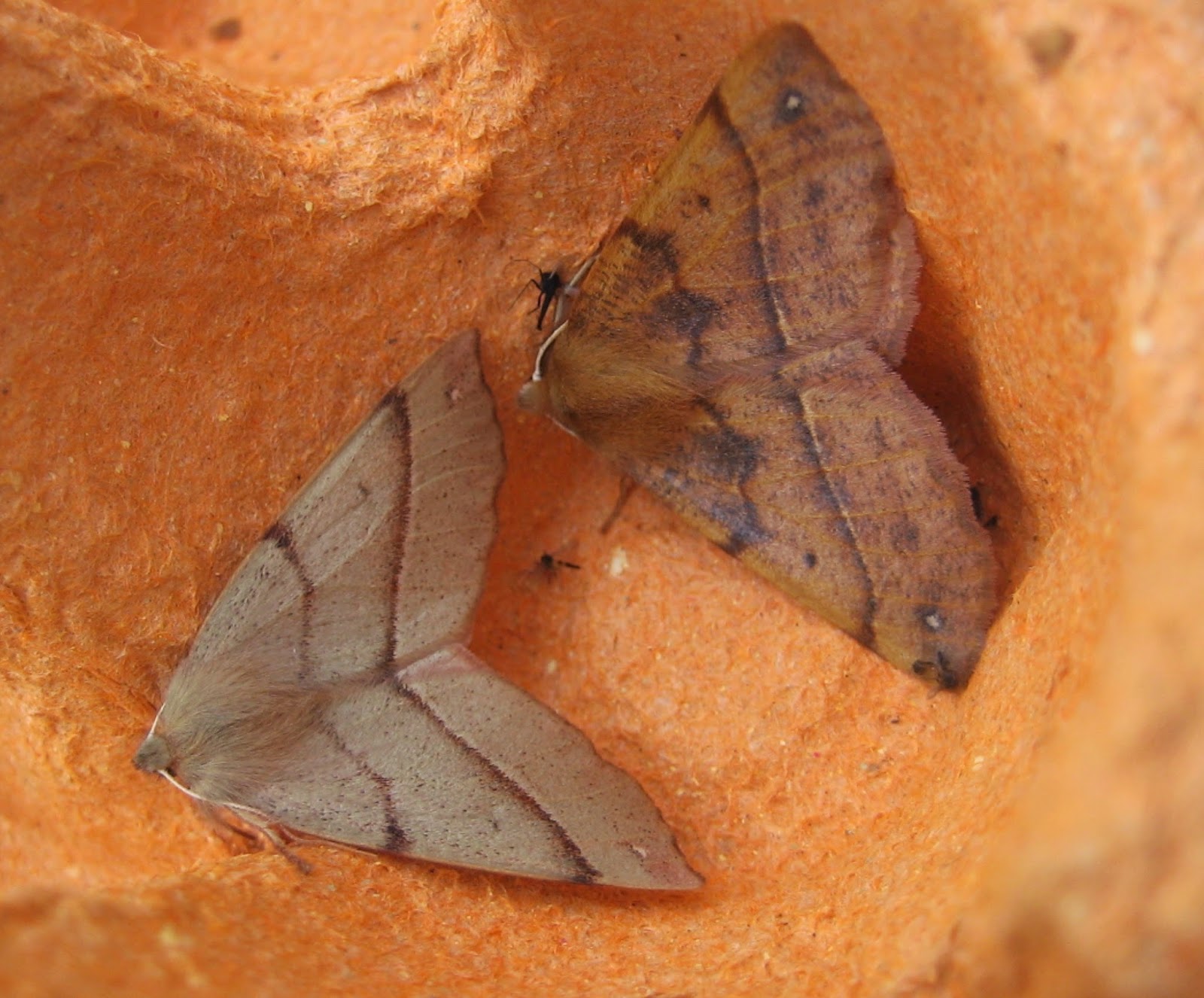 And here they are together, a fine married couple and actually one of the commonest of current visitors to the trap. They are running second only to the Autumnal/November moths whose great variety is shown in the pictures below. I wonder if the pale one is a Pale November Moth. I must try it on my friends at Upper Thames Moths to see if they can tell from a photo. 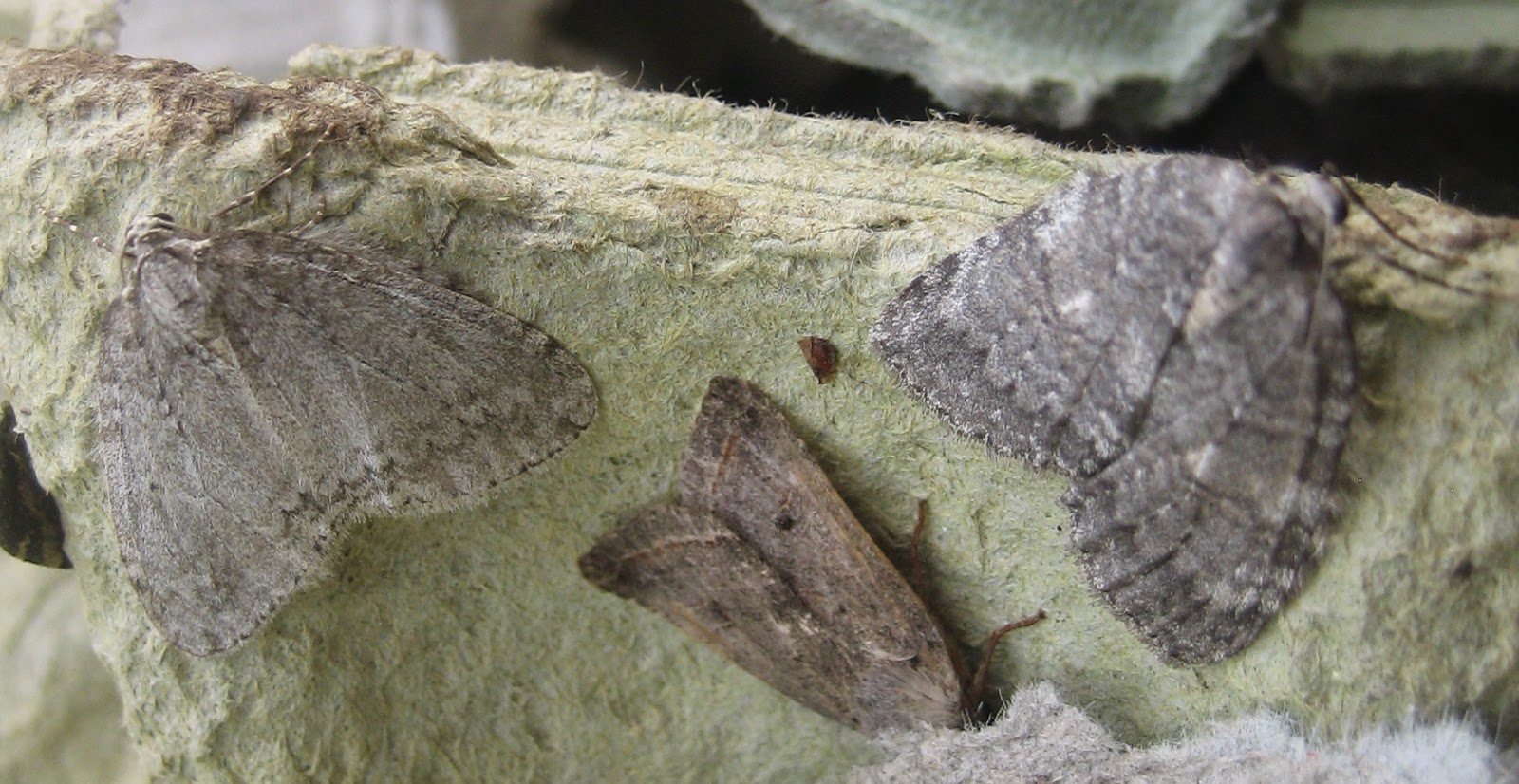 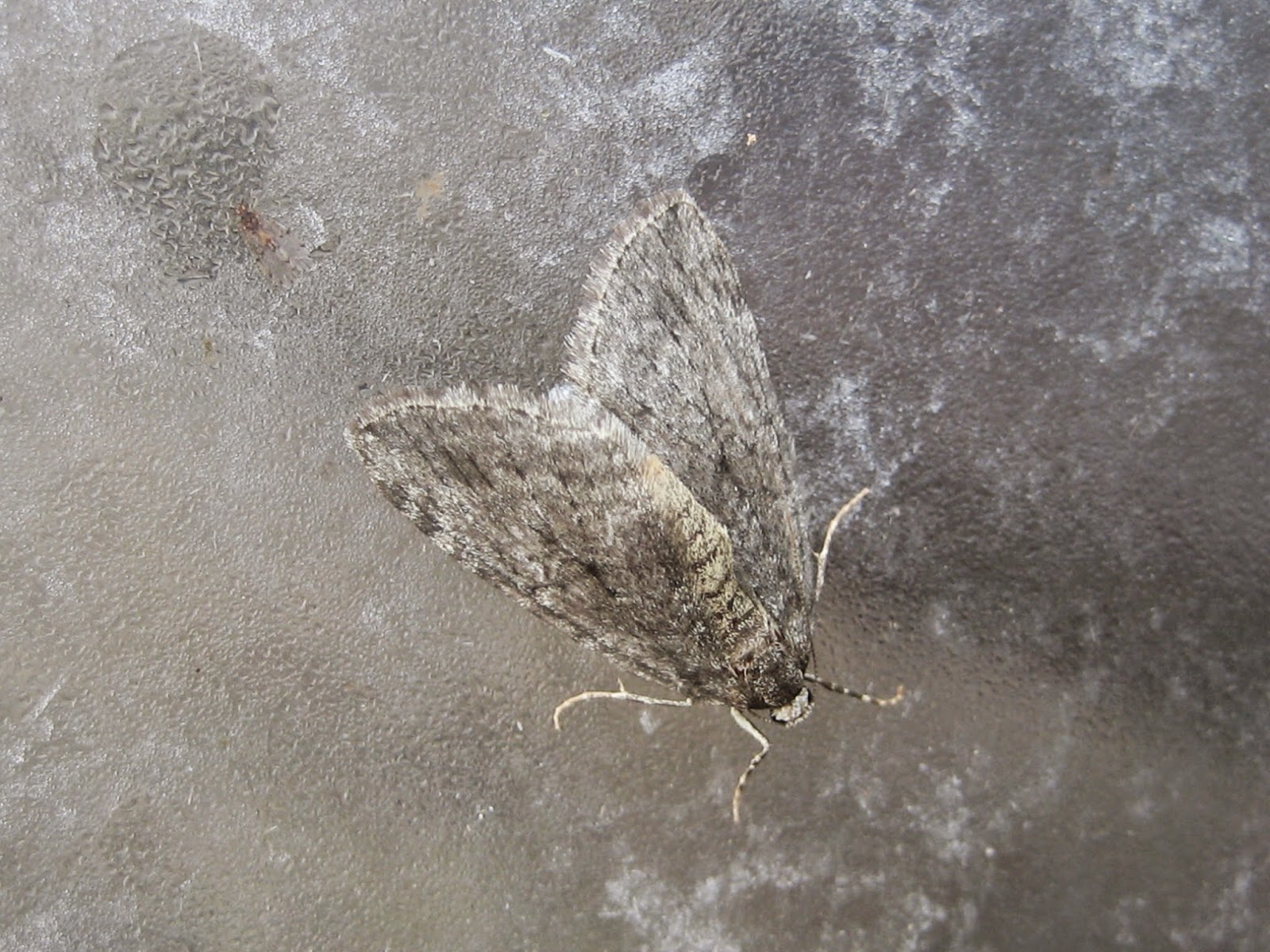 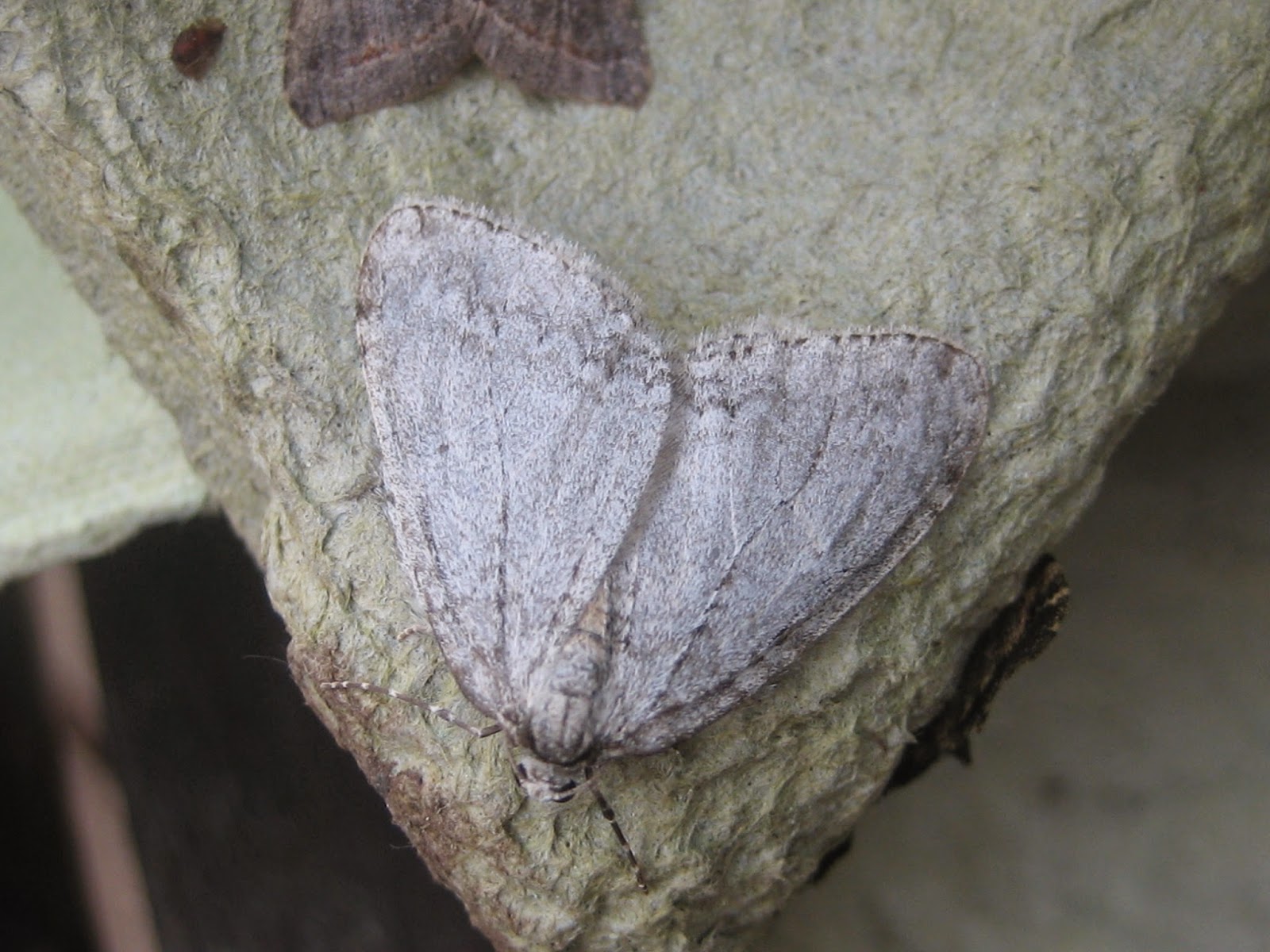 Posted by Martin Wainwright at 08:11 No comments: