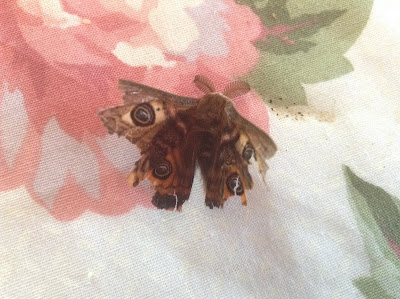 Lots of Spring things in the natural world are early this year, not by more than a fortnight but that can be enough to cause problems. Here are the battered remains of a male Emperor moth, a great grandchild of the magnificent empress which visited me in May 2014 and gave me a clutch of eggs which started an enormous dynasty. 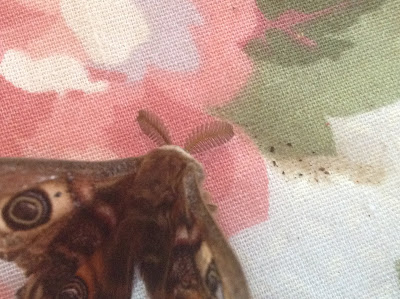 This chap emerged unexpectedly early from one of a batch of cocoons woven last year by caterpillars in the care of very nice neighbours. Alas, his promptness meant that he was confined and his emergence unexpected. RIP. A close watch is now being kept on the others. 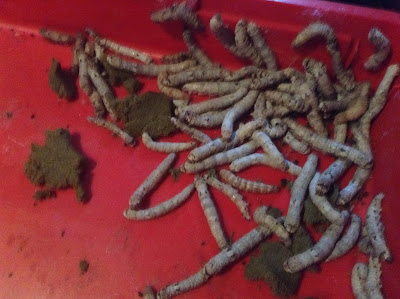 More happily, another neighbour who lives in a narrowboat on the Oxford Canal has enterprisingly reared Silk Moths from a batch of eggs supplied to her by a naturalist firm at Christmas. I have to admit that I was dubious about the chances of the tiny caterpillars which soon emerged, given that their foodstuff was a sort of concentrated leaf extract and their home in a boat which, though very snug, had all the high dependency on curious heaters common among those who live afloat. 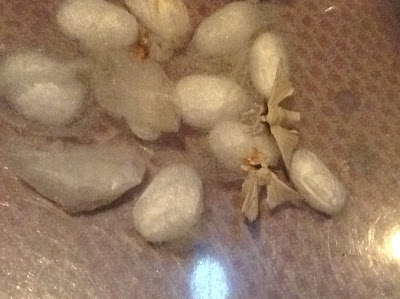 I am glad to say that she has triumphed and here are some of the moths, above and below. They are emerging at the rate of four or five a day and their guardian is hoping that they will breed in turn, just as my Emperor moths have done for three generations. In which case, she has promised to give some to me. This may involve the further experiment of freezing the eggs until the time is nearer when I can carry out regular harvests from Oxford's mulberry trees. 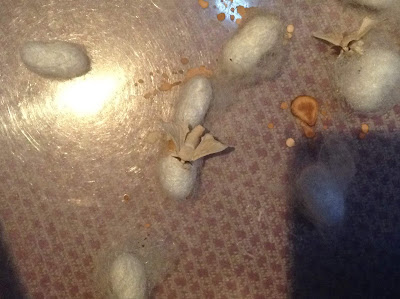 What of the silk, meanwhile, which was the original incentive for my friend who is more of a textile enthusiast than an entomologist - though her interest in the latter study is increasing by the day? In spite of the number of cocoons, we are not talking (yet) of the sort of quantities which could make up silk pyjamas or even a hanky.  But one of our fellow members of the local Knit and Natter brightly suggested the other night: "What about floss?"  I will keep you informed. 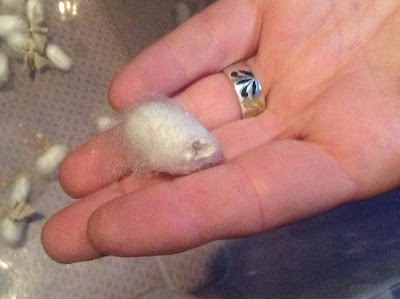 Posted by Martin Wainwright at 15:50 No comments: 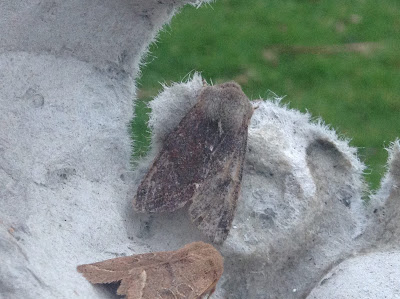 Cold, windy weather courtesy of Storm Gareth isn't deterring the hardy but unremarkable-looking moths which fly at this time of the year. There were over 50 in the light-trap this morning, mostly Common Quakers with a few Small Quakers, a couple of Hebrew Characters and a new arrival for me this year, the Clouded Drabs shown in my first and second pictures (the top moth in the first picture, with a Common Quaker below it). 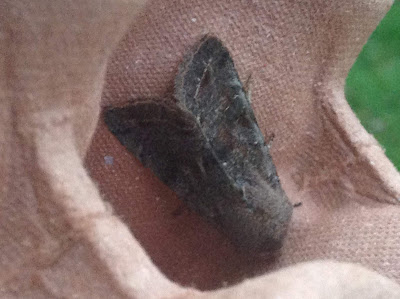 Here are a couple more: a pair of Common Quakers and another Clouded Drab.  More excitingly, and I hope the subject of my next post: a neighbour who lives in a narrowboat here has successfully bred silkworm caterpillars, seen them chrysalise and just hatched her first moths. She's a renowned member of our Knit and Natter group so we may all be clad in silk before long, like Robert Herrick's Julia. Or, as one knitter and natterer said last night, given the small quantities of the material involved, we may alternatively be using home-made, silkworm-spun floss. 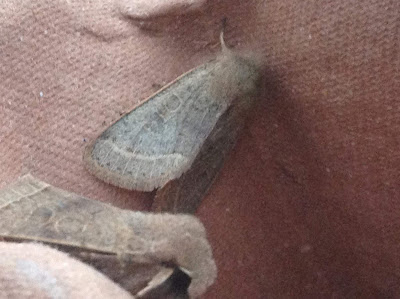 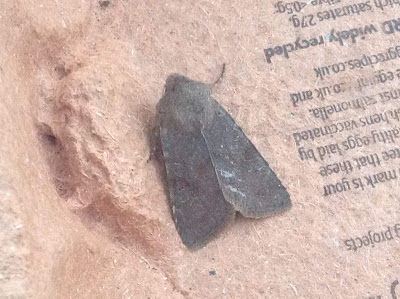 Posted by Martin Wainwright at 08:29 No comments:

M is for March - and, of course, Moths 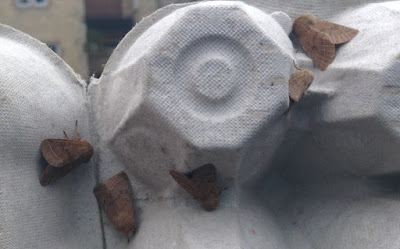 I have been slow to start lighting the lamp this year for the moths, which rewarded my tardy session on Friday night by arriving in quite impressive numbers. There were 40 in the trap, including the little assembly of Common Quakers shown above, with three individuals below. This species is one of the first harbingers of Spring, emerging from its underground cocoon from early March and often, as with this year, in earlier mild spells during the late Autumn and Winter. It varies a lot in ground colour but is always modest and plain. Hence its name. 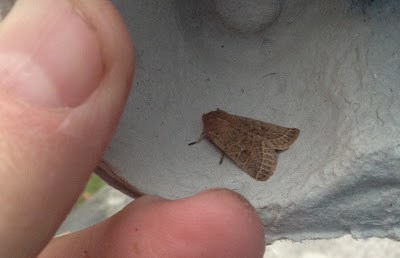 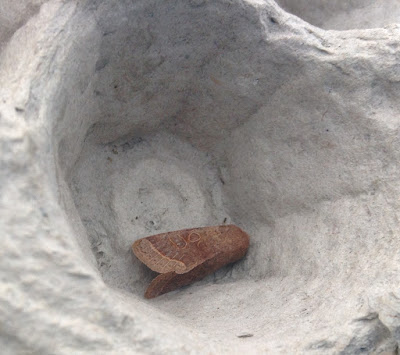 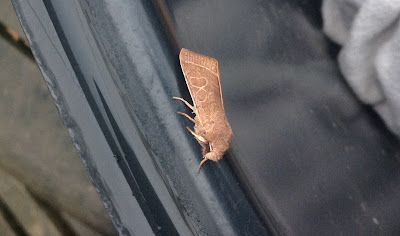 Also in the eggboxes - a much-reduced pile which Penny and I need to supplement by a diet of omelettes and boiled eggs with soldiers - was the Common Quaker's regular companion between March and May, a Small Quaker shown in the next picture, below. It is indeed a little smaller than its Common relative but not by much. It is a feeder, a habit not shared by all moths, and enjoys sallow catkins of which we have many locally. The Common Quaker shares this habit and extends it to blackthorn blossom which has just burst into bloom here this week, filling the hedges paradoxically with white. 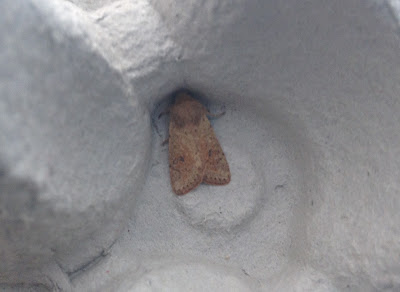 Both these moths belong to the Orthosiini genus of the Hadenidae sub-family of the Noctuid family, the largest among UK moths with some 400 members - and a further 21,000 worldwide. The Noctuids are also a controversial family scientifically because species keep being both added and removed by taxonomists rather like one of those large households with extensive dealings with Social Services. As the Moth Bible notes, another of the Noctuids' sub-families, the Ophiderinae, is 'an uneasy ragbag collection of species which did not seem to fit elsewhere, now being disbanded.' Perhaps it has been disbanded as I write, but taxonomy has little appeal to me, although it is an understandable source of fascination to all who like lists.

My third moth is also an Orthosia, albeit of a different faith. Here is that old familiar to readers of my musings, the Hebrew Character, named for the reproduction of the Hebrew letter Nun on its forewings. This mark was allegedly given to it because it had the audacity to speak to God, although what they said to one another (assuming that God wasn't too started to reply) is not known. 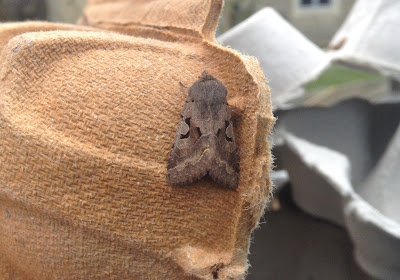 Next we have a couple of more distinctive new moths for 2019, a Brindled Beauty - Update: Sorry, it's a Small Brindled Beauty. Thanks v much to Dave Wilton, chief organiser of the superb Upper Thames Moths blog, for correcting me on this in Comments - and a pair of fine Oak Beauties. The trap was placed close to a medium-sized oak tree which I suspect of being their home. The second one is on a grubby old sheet which I have brought into service because the eggboxes are so sparse. I shake the moths out in the morning, for all the world like an old Spring-cleaning housewife. 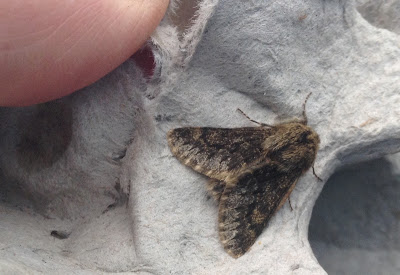 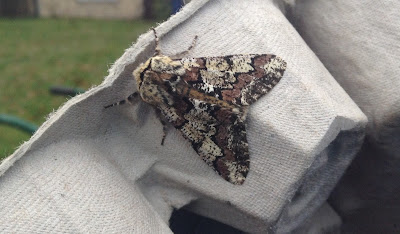 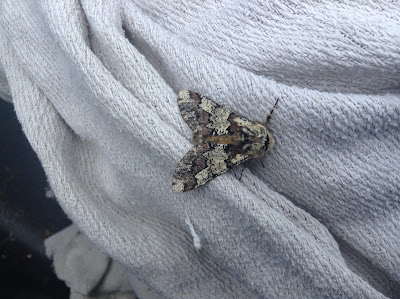 These are both moths which we expect to find flying around at this time of the year even though overnight frosts persist and have been quite harsh. I would agree with others, though, that this year is a bit ahead of itself. I saw my first Brimstone butterfly last week, two weeks before my previous earliest record, two years ago, of 9th March.

Finally, I was not entirely idle in February and with the help of Penny the ace indoor moth spotter, I photographed these non-trap arrivals: 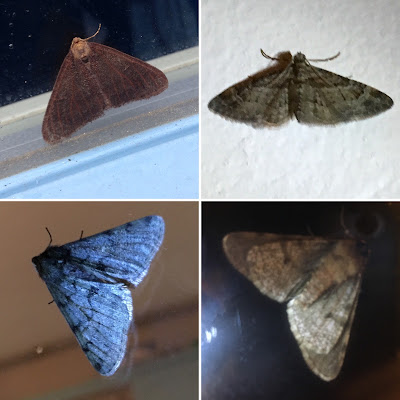 Three are Mottled Umbers, predictable visitors, but I was pleased to be able to identify the fourth - top right - as a Double-striped Pug, which was out early. It usually gets going towards the end of March.  Update: My smugness at ID-ing the D-s P has to be counterbalanced by Dave's kind correction of the three other moths. The one at top left is actually a Dotted Border and the bottom two are Pale Brindled Beauties rather than Mottled Umbers. Apologies as ever. At least it increases this year's meagre tally (so far).

Posted by Martin Wainwright at 07:40 2 comments: