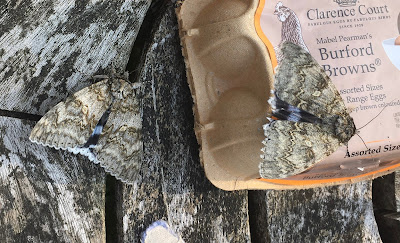 There are still four nights to go until the first anniversary of my first-ever Clifden Nonpreil which was the realisation of a wistful boyhood dream. In the last 11 nights, I have had SEVEN, with a pair sleeping quietly in the eggboxes this morning.  I have been publicising this extraordinary phenomenon locally and inviting neighbours to come and have a look, so I didn't get round to taking photographs until 9.30am instead of the usual 7am or so. On this lovely sunny days, the moths were getting warm and both took off - a most impressive sight - before I could persuade them to show the full extent of their lovely blue-banded underwings. 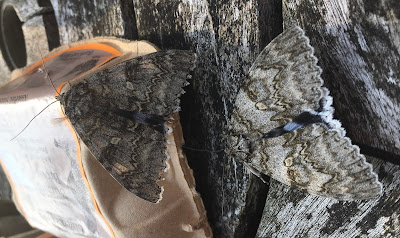 Significantly, one of them (on the left in the top picture and the right in the second one) was a mint condition specimen, so hatching from chrysalises is almost certainly still going on and I have no doubt myself that the moth is breeding nearby.  I hope this situation is known about more widely and expertly; every time I report a Nonpareil to iRecord, I get the automatic 'Record Cleaner' email - not a challenge to authenticity but signalling that there are no records within ten kilometres.  So what? Well, it appears that anyone searching for Clifden Nonpareil records in Oxfordshire would not find them, nor others which have been on the Upper Thames Moths blog as part of this extraordinary phenomenon.  That would be a shame, and I am seeking reassurance that anyone researching the subject would find the full extent of the revival via other databases, including the UTM blog and this one. Otherwise we risk unneccessary further gloom over species decline - not to play that problem down, but the data needs to be comprehensive, so far as possible, and accurate.  Meanwhile, here is the fresh Nonpareil again, closer too but - sorry - without the blue. Other moths tomorrow. 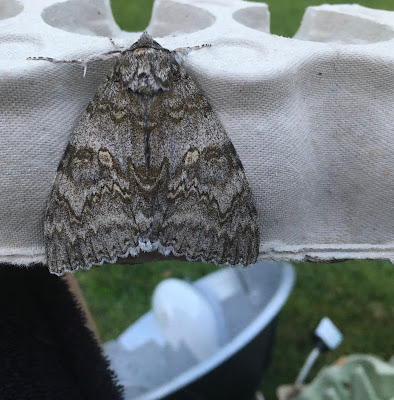 Posted by Martin Wainwright at 11:42

Goodness gracious, I don't even know what to think about that! Well done!

Hi Martin, Lucky you, I am still dreaming of my first Clifden Nonpareil in my north London light trap. I wouldn’t , however, get too hung up about the iRecord notifications- I get these for a whole range of species. The notification is not telling you that none have been recorded; just that when the original geographic distribution of a species was first set up, you were outside it. Presumably, based on yours and other’s records, the distribution may well be updated at some point. In the meantime, we should rejoice in iRecord - it is a marvellous system for not only maintaining one’s own natural history records (complete with photos) but a way of disseminating them within and beyond the scientific community. Rejoice also in those notifications- each and every one of them means you are advancing the borders of our knowledge- provided of course the initial ID is correct!