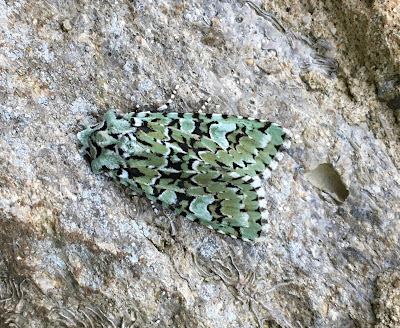 I had a lucky break this morning after I thought that I'd have to satisfy myself with a brief discourse on the different colourways of that currently populous moth, the Lunar Underwing. I photographed a light grey one and a brown one and was about to add a dark grey example when the battery on my iPhone ran out.

The moth was starting to whirr its wings, so rather than risk taking it into the warmth of indoors while I plugged the 'phone in to the recharger, I took it to the house wall where I hoped that it might settle on a similarly grey background. As I tried to persuade it off my finger, my eye caught a different and much more attractive colour nearby. Just above and to the right of a snoozing Black Rustic, whose unmissable triangle I had spotted earlier but had not intended to investigate (they are as common as the Lunar Underwings just now) was the year's first Merveille du Jour. 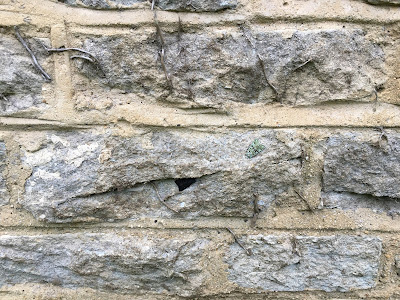 Regular readers will know that this is one of my absolutely top moths for obvious reasons. Its colours are strikingly lovely and also strikingly suitable for a background of lichen. This one is ten days earlier than any of those which have come in the seven years that Penny and I have been here in Oxfordshire. We never saw one in Leeds although a friend in Scarborough recorded plenty. 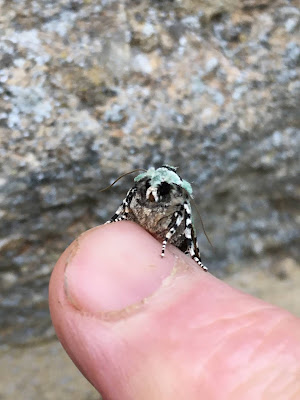 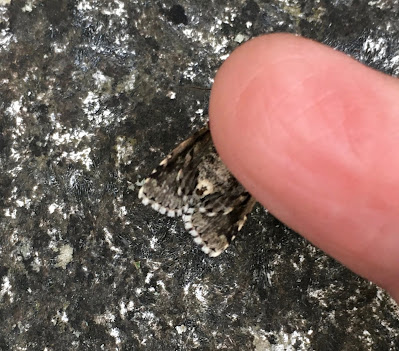 I pottered past the wall at 4pm after mowing the lawn and the moth was where I had left it. I moved it to a garden wall, to give it the comfort of a patch of lichen: 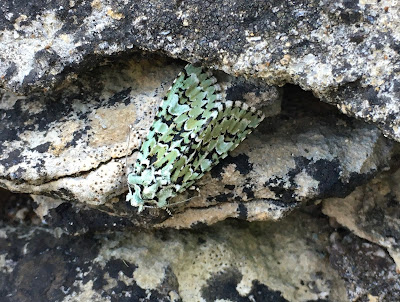 That is probably the last high point of my moths in 2020, a pretty incredible year for all the dismal context of the virus, may it perish soon. Green-brindled Crescents and Brindled Greens will still bring colour, however, and you never know what else may just turn up. Oh, and here is a Speckled Wood enjoying the warm, late afternoon sunshine which I fear will be less common next month. 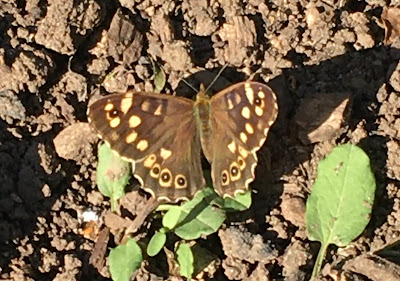 Posted by Martin Wainwright at 17:22

Martin, nice Merveille. Had mine on the 21st, last year 8th Oct.

Goodness, that's early! It doesn't seem to mind the cold.

I think I'm winding down now and will soon only post once a week or so. But it's been quite a year!

all warmest as ever