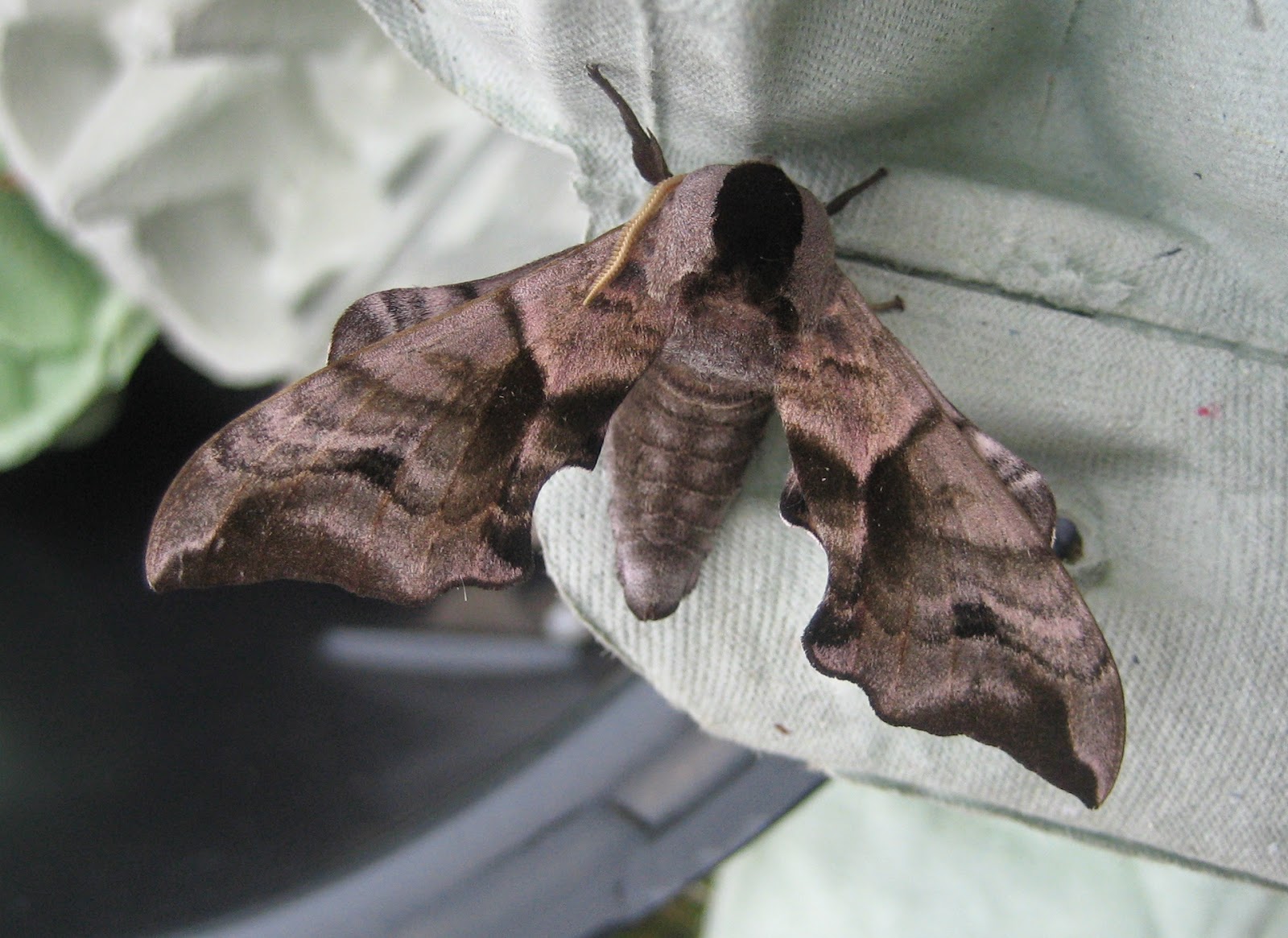 This rakish-looking character hides a dramatic secret and one which is perhaps as beautiful as the peacock, below, which tried to woo me on my birthday treat in the excellent Harcourt Arboretum which Oxford University has established at Nuneham Courtenay, using the long-standing plantings of the Liberal dynasty of Harcourts who once lived there (and in various other mansions in Oxfordshire and elsewhere). 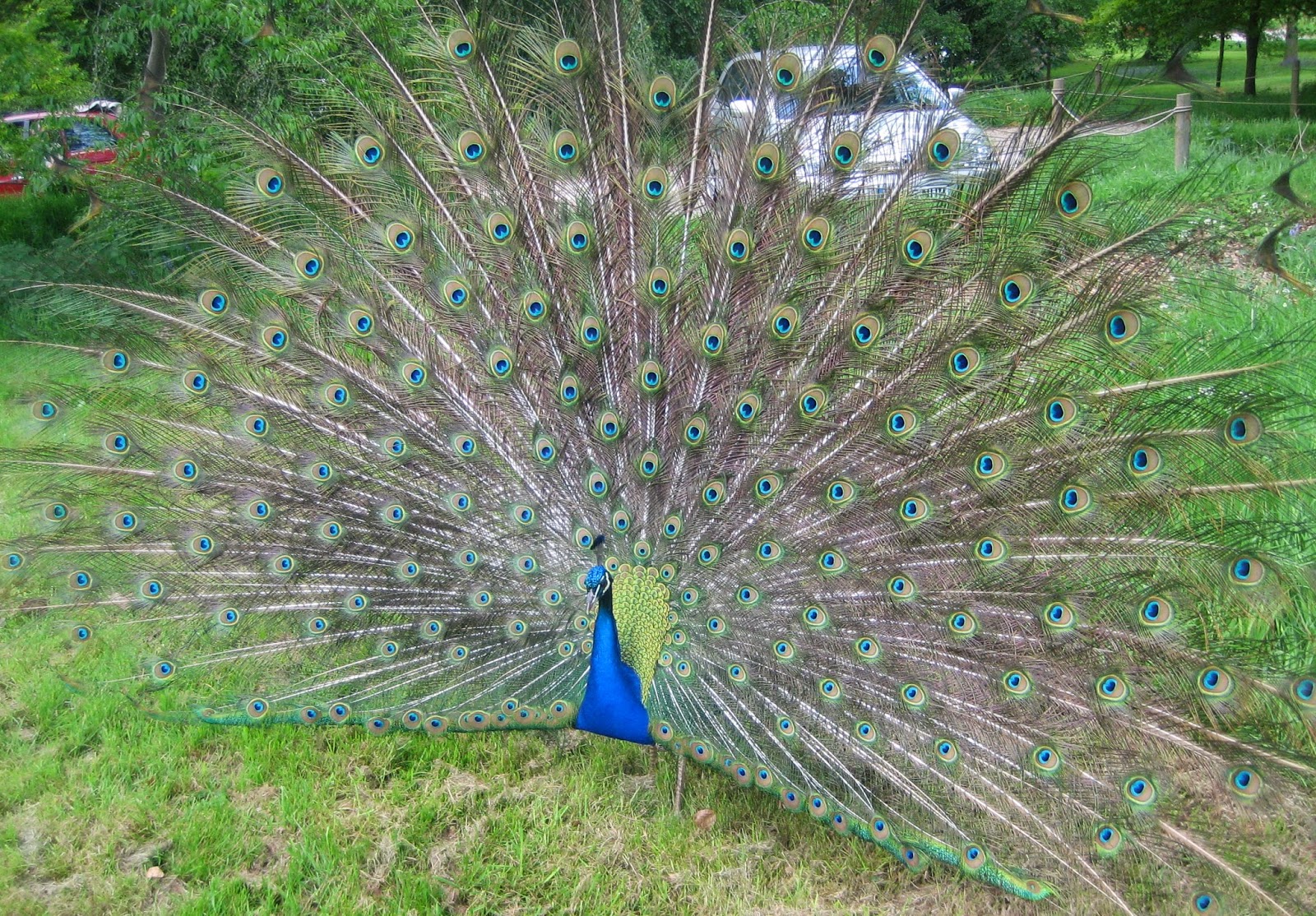 The Eyed Hawk Moth has the advantage of the peacock, too, in the element of surprise. Familiarity is part of that issue, so far as the famous bird is concerned, but even when his stupendous tail is folded, the peacock struts about in a fabulous waistcoat of iridescent blues and greens. 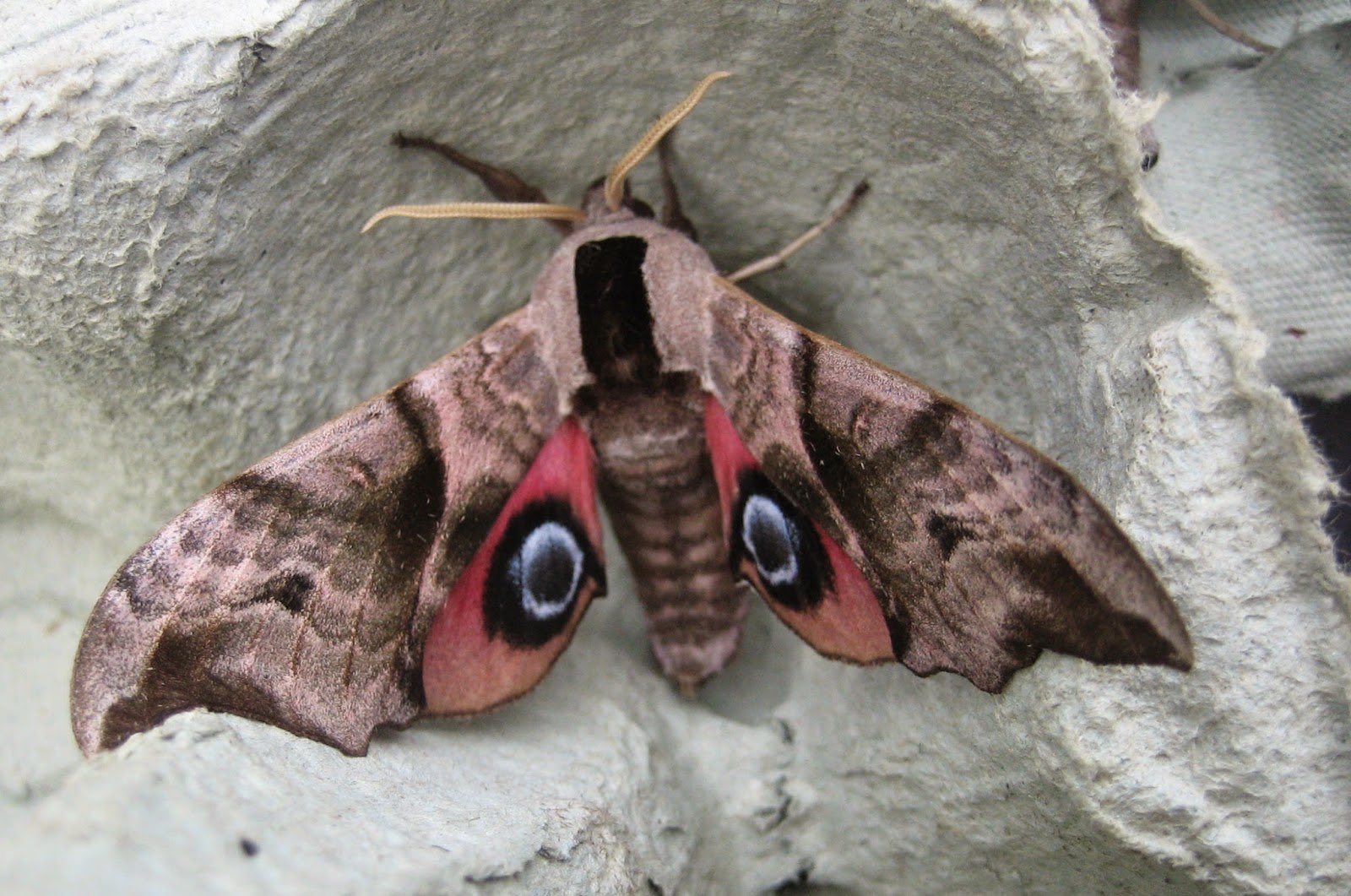 The moth's eyes either have to be coaxed into appearing - regard my beautiful finger in action below, or triggered by a threat. Studies have shown that the sudden appearance of the eyes, accompanied by a deliberate rocking motion by the moth, can deter attack by hungry birds. 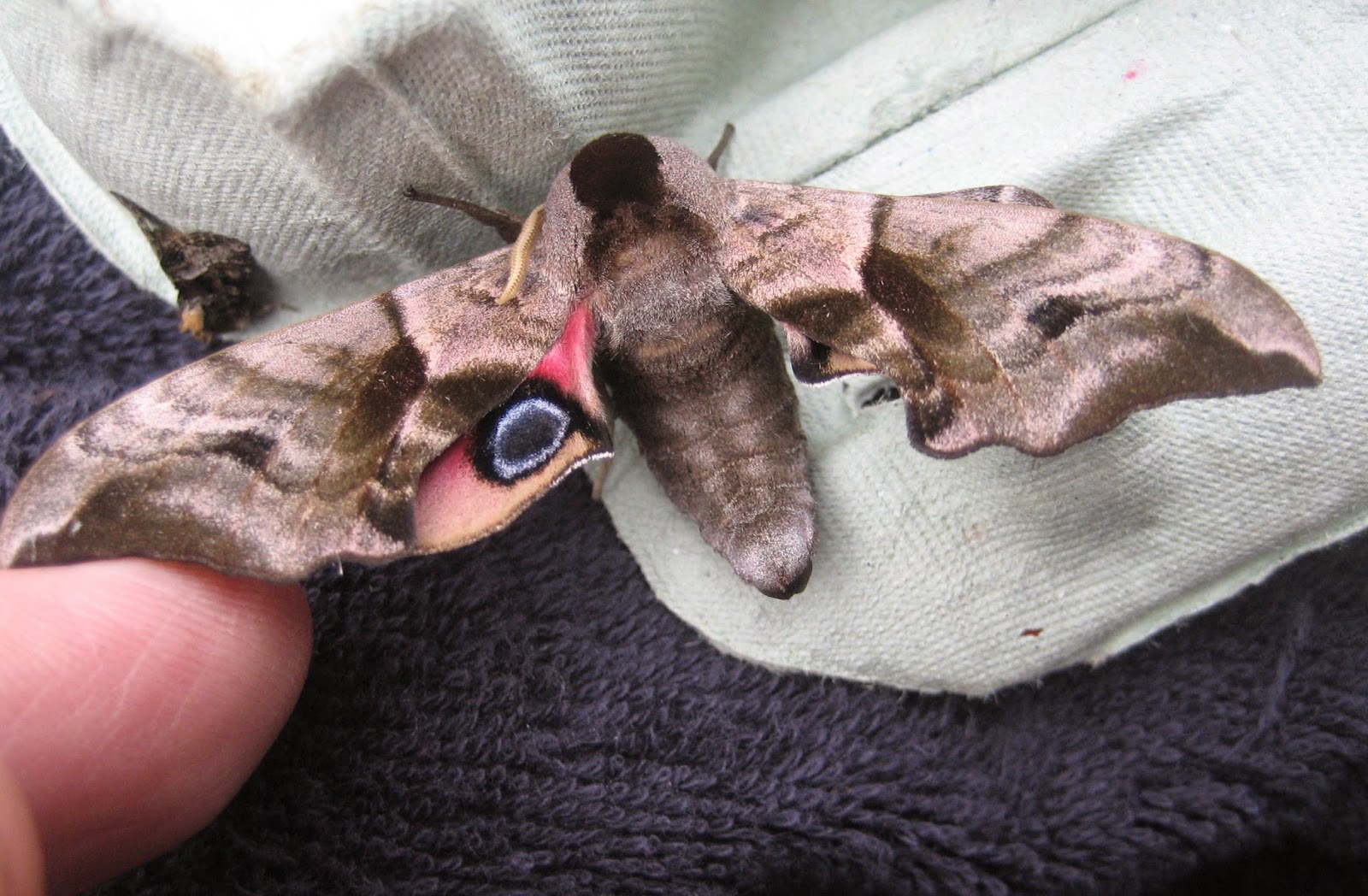 This question of 'eyes' is fascinating for what it says about animal vision and our anthropomorphic tendencies (which reach a sort of peak in the books of Beatrix Potter). Deterrent colouring is hugely varied in moths and includes a lot of quite simple versions such as bright red or yellow. Has the sophistication of the 'eye', which is widespread among insect wing patterns, developed because it really does look to non-human predators like an eye, and possibly one of a counter-predator? Or is it the concentration of different bright colours in a tight space which scares the potential attacker away? 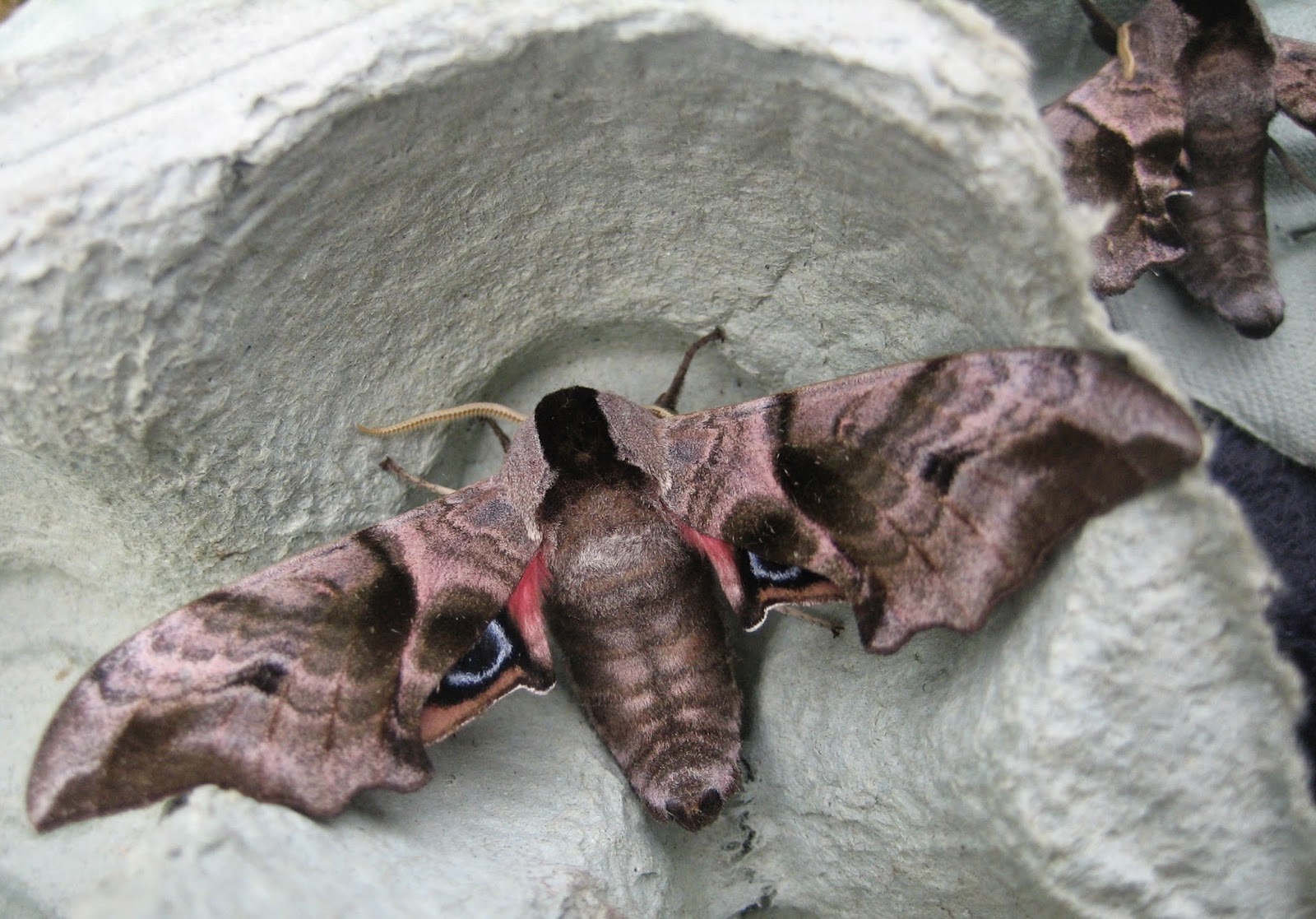 I was doubly lucky last night with my Eyed Hawk, which brings my tally of hawkmoths this year to five different species, the others being Privet, Poplar, Lime and Small Elephant with the Large Elephant certain to join them soon.  Look at the background of the picture above. Yes, there were two in the eggboxes. I think from the size of their bodies that they are females, so I may get some eggs to add to my little nursery of Emperor moth caterpillars which are munching their way through ever-increasing gifts of hawthorn leaves. 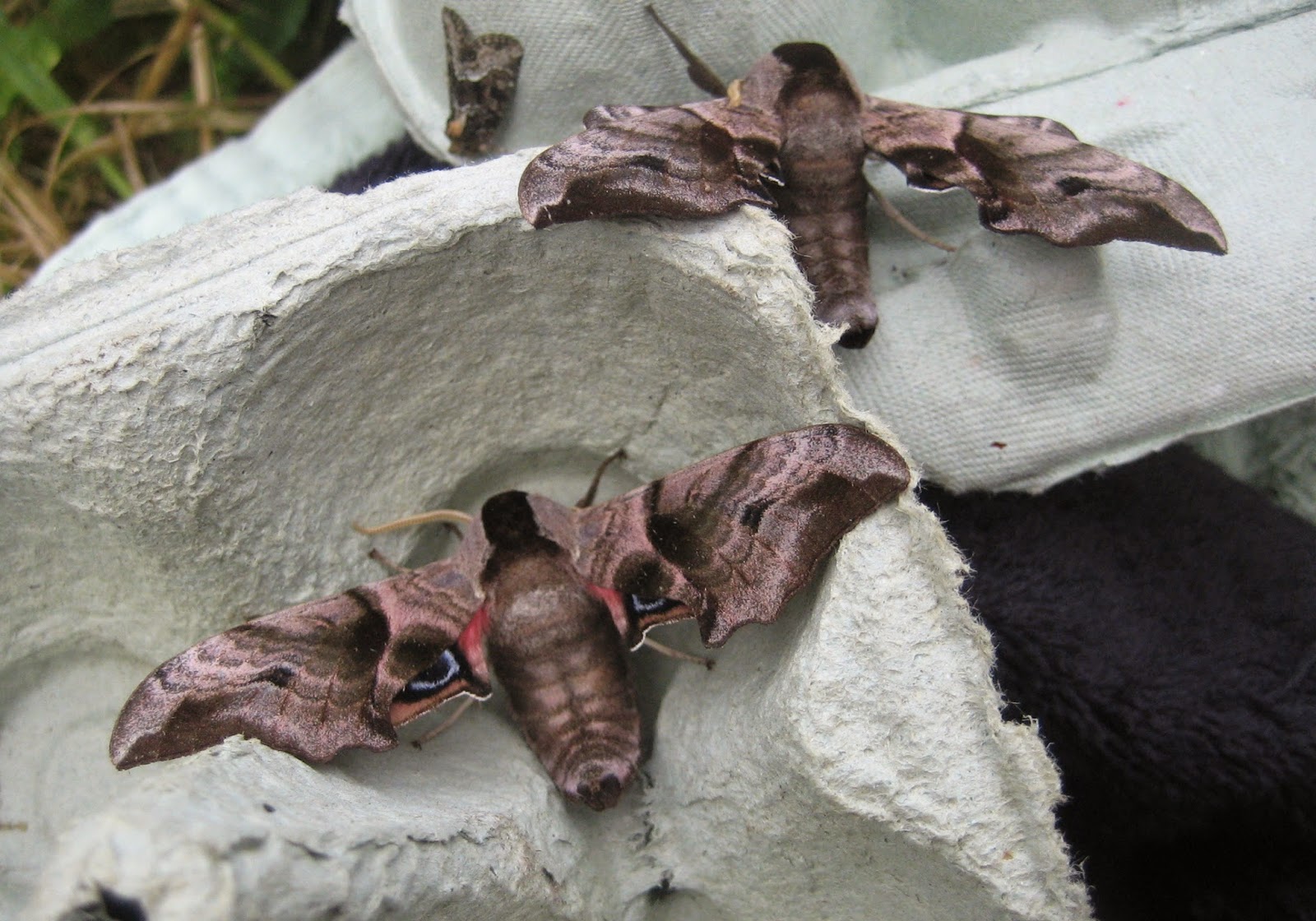 Finally, here's an Eyed Hawk head-on.  Don't worry about prey getting this view, though. Like the Emperor moth, adult hawk moths in the UK do not feed and therefore lead sadly short lives. 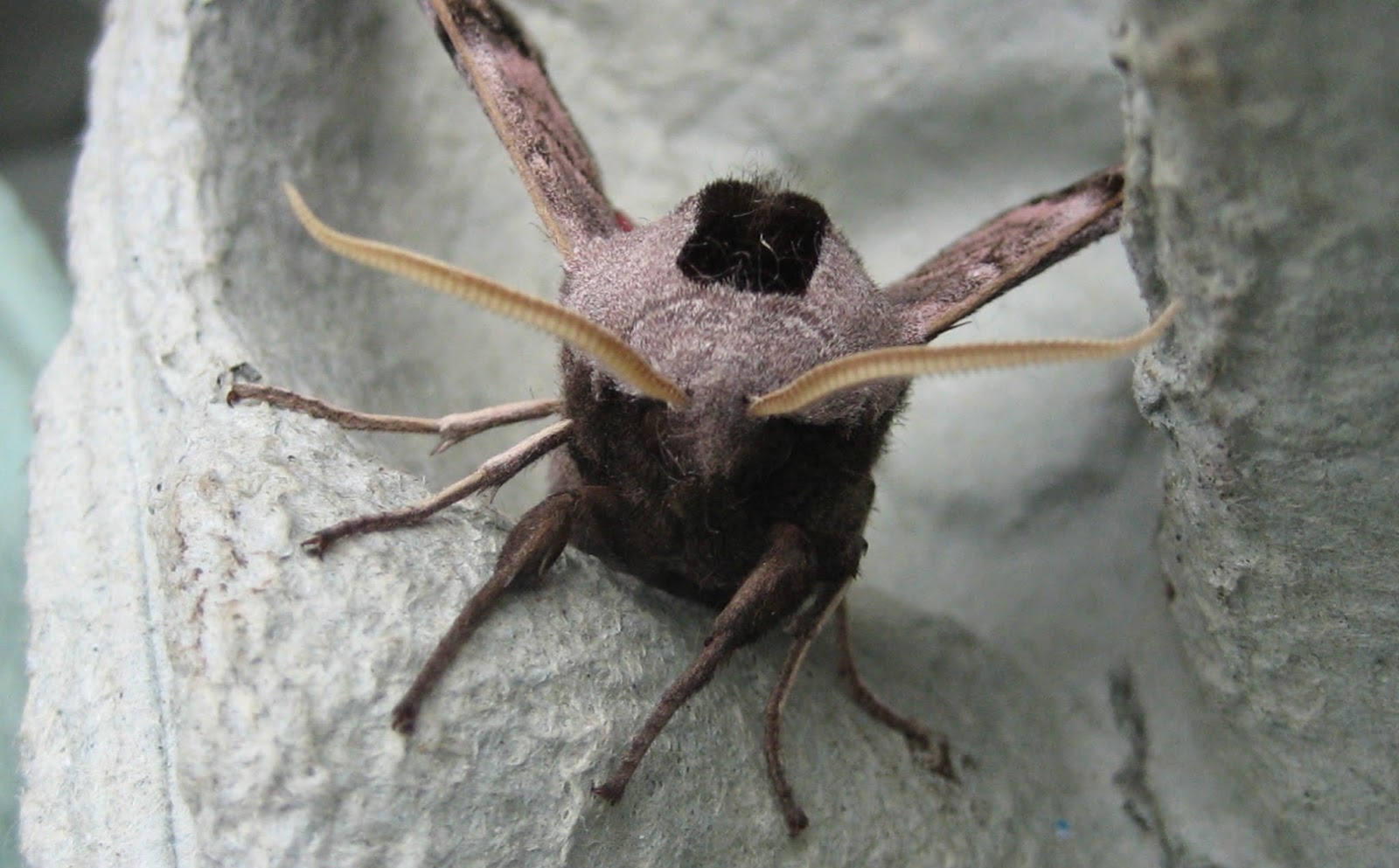 One other point of interest about the Eyed Hawk: it is not a moth calculated to appeal to Alex Salmond. Although it is common throughout England up as far as Cumbria, only one has ever been recorded in Scotland.
Posted by Martin Wainwright at 09:34

Yes they are terrific. I took them round to several neighbours and a couple of passing canal navigators and everyone was delighted. all warm wishes, M