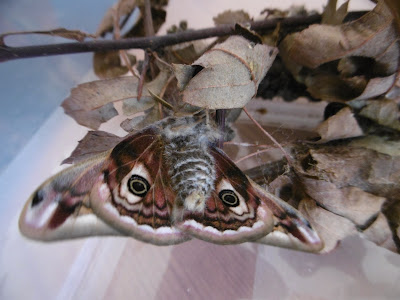 Exciting news: two children of the magnificent female Emperor moth which visited the trap in early May 2014 have finally hatched. As recorded in various posts since the original arrival, the beautiful Empress laid a clutch of eggs on an eggbox - appropriately - and I managed to rear the 25 caterpillars until they formed cocoons.

A solitary male hatched last year but the others slumbered on, until earlier today when I checked their Tupperware home before heading off down to London to see the grandchildren. I brought the box into the house last week in the hope that warmer temperatures might encourage a hatch; I'd initially given the remaining cocoons up for lost, but Dave Wilton of the marvellous Upper Thames Moths blog urged me to be patient. Emperors often spend two whole years in pupation, he advised. Some have spent four years slumbering in their cocoons.

He was right. To my delight, when I checked this afternoon, there was a newly-hatched male in the box. I was in rather a rush because of getting other things ready for our London trip, but luckily I gave the box a thorough look. And there, tucked behind some sprigs of hawthorn (one of the species' many foodplants) was a lovely female too. What excellent things to show our little granddaughter, who has just been given a brother, four days ago.

Thus the moths are now in east London where I hope they make a life. We released both in the garden soon after arriving from Oxford. It's a remarkable life cycle, the Emperor Moth's. The adults don't feed and live only a few weeks during which their sole ambition is to mate. And yet they can spend over two years in the egg-caterpillar-pupa stages, just to prepare for this. 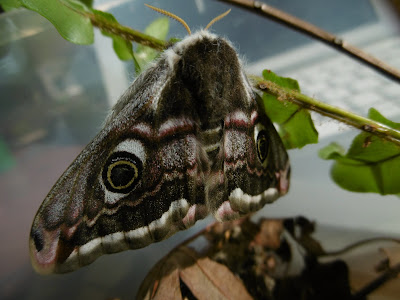 Posted by Martin Wainwright at 21:51

Wonderful - well done on the moths finally emerging. I have to go and check mine now!! I reared mine from eggs too and last year 4 males emerged but no females. They are such beautiful moths. Will let you know when and if any of mine emerge in the second year :)

postscript - none yet but I will bring them indoors and start spraying them with water. Congratulations of the arrival of your new grandson.

Hi there and many thanks - both re the Empress and the grandson! Your advice last year was very helpful and reassuring and thanks very much again for it. I've two cocoons left now but - as per the latest post here - there's also a new clutch of eggs. I'm not sure I've time to raise another family, though...

all warmest wishes as ever