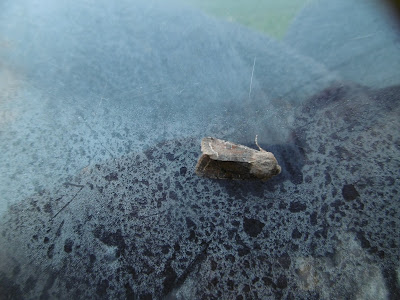 Stuck amid the ice floes like Sir Ernest Shackleton's ship the Endurance, here is my only visitor for the last three nights. A lonely Clouded Drab which was so sound asleep on the trap's cowl that my various attempts to stroke and tumble it back to life came to nothing. I left it as firmly in the Land of Nod as ever, albeit in the snugger surroundings of an eggbox.

The frosty nights must be primarily responsible for the unusual dearth of moths this year. The contrastingly warm and sunny days we are getting are bringing out plenty of butterflies. On the cheery side, too, my young Emperors and Empresses are munching their way through ever-increasing amounts of hawthorn.

I mentioned the other day how they showed no interest in bramble when I offered some as an alternative dish. I also raised this on the Upper Thames Moths blog and one of its many experts, Andy King, replied with this very interesting observation:

Bramble is a bit of a funny foodstuff. It is eaten by a load of insects in captivity - including lots of stick insects. But, unlike perhaps a lot of other things it might be better to feed them old leaves, rather than the fresh new ones - counter-intuitively, perhaps. The thinking behind this is that the new ones are unprotected by thorns and therefore contain toxins or repellents, whereas the old leaves are, theoretically at least , protected by prickles. If the caterpillars have started on Hawthorn already they may be reluctant to change - this happens to some, but not all species.

Maybe this is one reason why my Mum was never much bothered about sell-by dates.
Posted by MartinWainwright at 08:39