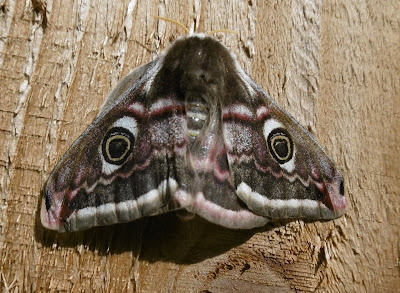 I am delighted to report more excitements on the Imperial front after the double hatching in the Palace nursery (actually a Tupperware box) reported in my last post. 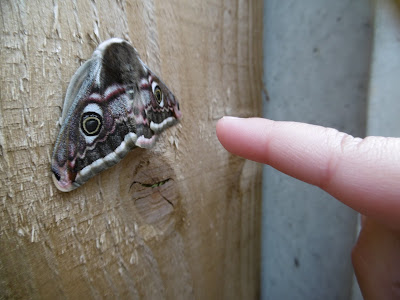 Penny and I duly took the two beautiful moths to the grandchildren in east London, where the male put up with its hosts only briefly before spiralling away into a bright blue sky. The female, however, flew only as far as the family's garden fence where she stayed all day, presumably releasing her pheromones in the hope of attracting suitors. That's the granddaughter's finger, above, showing them the way. 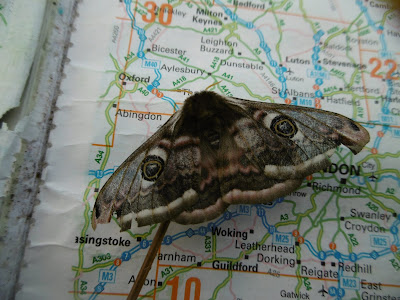 Emperors have this habit, apparently attracting males from up to three miles away. It's part of an extraordinarily strong breeding urge in a species whose adult moths do not eat or sup nectar and consequently live only for a few weeks - and that after spending a summer as a growing caterpillar and then up to three, or even four years in a cocoon. Nature's ways, eh.

The Empress' vigil was unrewarded, sadly, although she clung to her post through drizzle, heavy showers and even a violent hailstorm as the weather put on a vintage British Spring display. So come evening, we popped her back in the cocoon box and took her home. Not many Emperor moths can claim to have travelled 140-odd miles in their first two days of life. 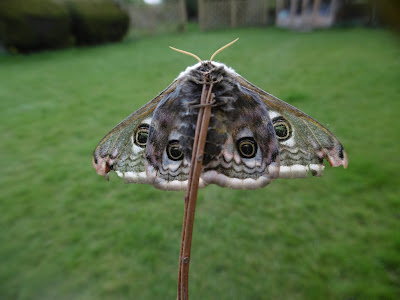 I released her again this morning and she is now waiting patiently on a garden wall and I will check occasionally to see if her Prince has arrived. But meanwhile, I made an exciting discovery back in the Tupperware, in the course of trying to find out (unsuccessfully) which of my four cocoons were the ones from which the two moths had hatched. 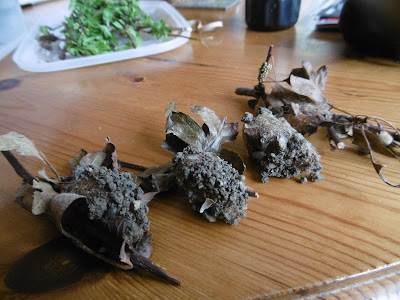 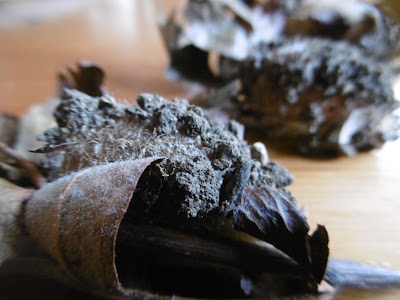 On a hawthorn twig supporting one of the cocoons was this cluster of fresh eggs, below. Are they unfertilised? Or did the two moths get together during several hours of sharing their modest home? As they come from the same brood, will this affect fertilisation and growth? Many questions, whose answers will in due course, I hope, unfold. 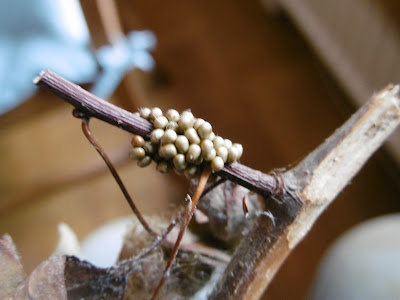 Posted by Martin Wainwright at 10:34

A wonderful post - and very exciting news about the eggs :) I just hope a female emerges this year here so I can try "assembling".

I sympathise re: the time concerned on rearing the caterpillars. I had dozens and even took them on holiday with me to Dorset for a week!! Somehow they all survived.

Hi again- and very good luck with your cocoons. I very much hope you get a female too. My latest one has now disappeared from the wall - I hope under her own volition. She may no longer have been 'calling' as Peter Hall on the Upper Thames Moths blog reckons the eggs I've found are probably fertile, being brown rather than the blueish ones which unmated females lay before they die. If all is well, I think I'll rear the catties to a reasonable size and then release them in a small nature reserve near here - Weaveley Furze (www.weaveley.blogspot.com).

All warmest again and good luck!

I still have some of the original cocoons that you gave me the year before last, as I am pretty sure that not all of them "hatched" last spring. I cannot remember if it was 4 or 5 adults that emerged last April, but they were all females. It would be great to see a male this time.
I have the cocoons in a box in my garden shed, and will be checking them each day from now on. Last year the first adult emerged on 13th April. I will let you know if any more adults emerge this time around. Fingers crossed!

Hi Steve - and good luck this year. I'm keeping a close eye on my remaining two. Meanwhile, the clutch of eggs has darkened in colour which I take to be a sign that things are going well

all warm wishes as ever