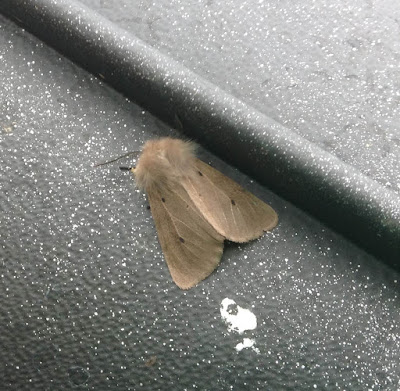 I am updating the photographs on my 'What Moth Is That?' tab above, which forms a complete record of visitors to the trap so far.  This is quite an arduous business, involving searching back over the seven-and-a-bit years of the blog, but I surged forward this week past M and N and am now in the middle of the Ps.

The grind is relieved by pleasure in re-encountering moths which I had all but forgotten. One of these was the Muslin and, Lo and behold!, an example was perched on the bulb collar this morning. It was cols last night and also apparently rained at some point, and the only other inhabitants of the eggboxes were four Hebrew Characters. So thank you, Muslin Moth, for a nice surprise.

The name derives from the soft, almost stroke-able texture of the moths' wings and their delicate colouring: white in the female, creamy in the Irish male form and this governessy beige in males found in the rest of the British Isles. The impression of a demure outfit is completed by the neat rows of 'buttons'. And don't underestimate the moth (a mistake often made with modest human beings). It is closely related to those aristocratic types, the White and Buff Ermines. Note  the rich fur collar and the rather fine, yellowy knee breeches in the second and third photos, which it shares with these posh cousins.
Posted by Martin Wainwright at 07:44