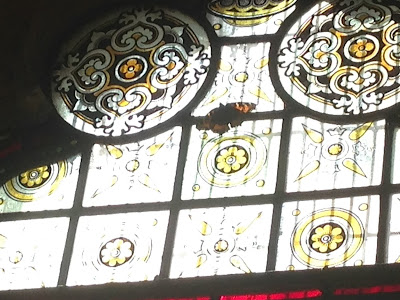 Today's picture comes thanks to a sharp-eyed friend of mine called Daisy, who comes to church with her younger brother (lowering the average age of our friendly gang by a considerable number of years).

She nipped up to me just before proceedings started and said: "There's a Small Tortoiseshell up on that window". Sure enough there was, above a graphic scene of the disciples weathering the storm on the Sea of Galilee. Well identified, Daisy, and thanks also to my fellow-coppicer at Weaveley Furze, Martin Knops, who whipped out his 'phone and snapped the insect.

Just before leaving, I spotted a flicker out of the corner of my eye and realised that it was the shadow of the butterfly which had moved to another window, a clear one without stained glass, in its instinctive efforts to reach the light. There is much potential symbolism in this episode; you can imagine Alan Bennett's vicar saying: "I sometimes think that we are all Small Tortoisehells seeking a way out of darkness." And needless to say, the appearance indoors of butterflies like this on warm Spring days has led to various stories handed down from the past.

In theatres, for instance, a butterfly fluttering about at a premiere is held to be a good omen - handily, because it is more than likely that one of the two main hibernating species in the UK, the Small Tortoiseshell and the Peacock, will have found the huge, cosy folds of a theatre's curtain a good place to tuck away.

Daisy was responsible for passing on news last year of a very interesting moth found in a nearby village where she and her friends were playing out. It was the Convolvulus Hawk, the second largest moth found in the UK after the Death's Head Hawk. More here and on my own encounter with this relative rarity here.
Posted by Martin Wainwright at 18:09