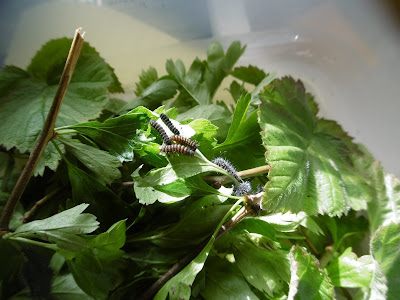 In my occasional role as pseudo-scientist, I have conducted a small experiment with my burgeoning family of Emperor Moth caterpillars.

I raised my previous brood on hawthorn which they ate with gusto. But a friend on the excellent Upper Thames Moths blog told me that his had been reared on bramble - blackberry - leaves which they ate voraciously.

I started my current family on hawthorn but yesterday I popped in a handful of bramble leaves as well, to see if the catties might give them ago. The result? So far they are proving as conservative in their habits as human children, like the marvellous Lola of Charlie and Lola in 'I will never, not ever eat a tomato'. Or as doctors. Not to get involved in today's dispute, but the history of the medical profession's resistance to change makes salutary (and enjoyable) reading.

The evidence for Caterpillar Conservatism is in the pictures above.

I'm interested too in the different, lighter colouring of a couple of the caterpillars, which may be a step ahead of their siblings in development? Or is it just the effect of sun light on their young and perhaps somewhat translucent bodies?

Finally, I noticed these slender prisms on our kitchen window this morning and hopefully wondered if they might be yet another virtue of that incredible stuff, spider silk. But our domestic regime is exonerated. They seem to be wafer-thin smears of window-cleaning stuff left behind after a vigorous polish by P last week.
Posted by MartinWainwright at 09:22