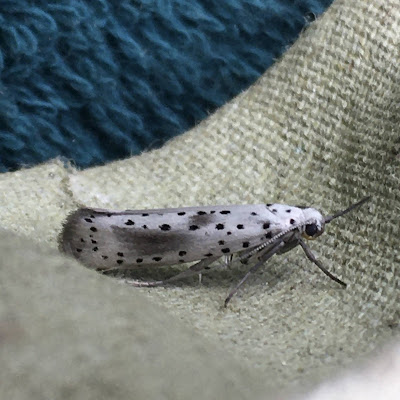 This little splinter of a micro-moth, above, caught my eye because of its prominent grey smudges which seemed to make it as different from the various common Ermines, as this black-dotted white family is known. Incidentally, they are famous for including species which create enormous webs of silk round whole trees and sometimes parked cars.

I thought at first that they might be scale damage to the wings but a check in the micro-moth Bible turned up an identical-looking moth, Yponomeuta irrorella. However, it is rare and usually found along the UK's Southern coastline. I naturally consulted the unfailingly excellent Upper Thames Moths blog and Dave Wilton, its maestro, replied:

"That is indeed Yponomeuta irrorella, quite a rare moth and some way away from its usual south coast haunts - a very nice catch indeed and might even be a first for the county."

Well hooray for that, especially as the same night - Monday 26th July - brought another newcomer for me, this brightly metallic gree macro moth below.  It's a Tree-lichen beauty, well-named both because it is really lovely and also because tree-lichen is its caterpillar's favourite food. 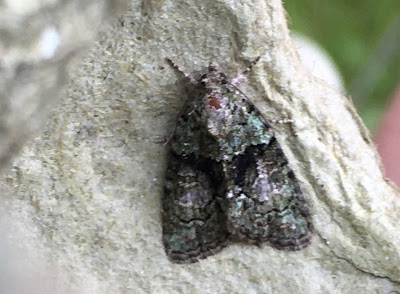 It had only been recorded in the UK three times until 1991; two from Cheshire in 1859 and one in Hastings in 1873. Then the invasion began.  My first edition of the Moth Bible notes its spread from the first few sightings in Hampshire, West Sussex and Kent as far as Dorset and Hertfordshire, as well as the Channel Islands. The third edition has it reaching as far north as Northumberland, West to Devon, East to Norfolk and finally, in 2015, to Oxfordshire. Six years later, to me! The picture below appropriately shows it with a much-longer-standing, successful immigrant, a Silver Y. 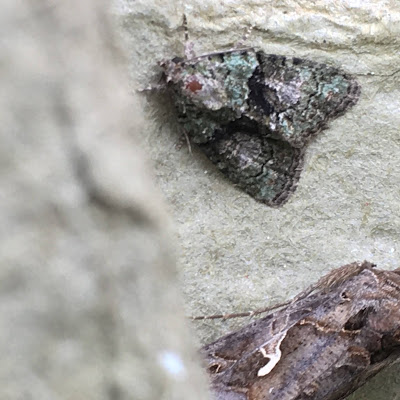 The more green moths the better, so far as I am concerned. The colour ranks second only to blue with me, and moths of both shades are not many, blue in particular. Not that other colours are lacking; I can never post enough pictures of Elephant Hawks, especially when accompanied by a Ruby Tiger's caterpillar as below. 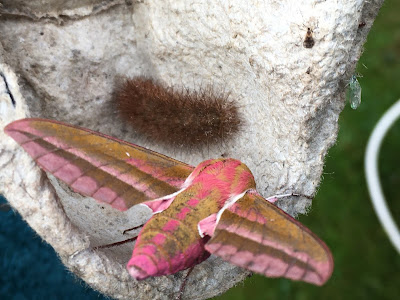 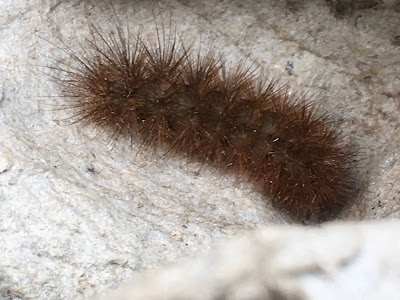 Adult caterpillars are rare in the trap but there are plenty of Ruby Tigers around, lovely creatures that they are. Here are some which have called in the last few days: 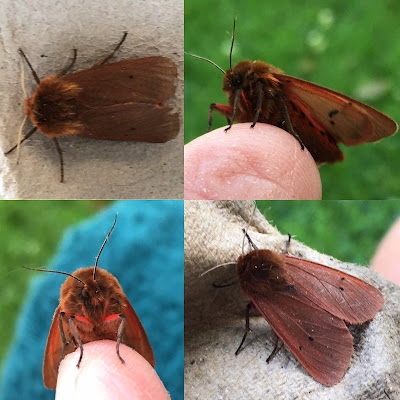 And here are some recent Elephant (and Poplar) Hawks, just to show that I meant what I said above. 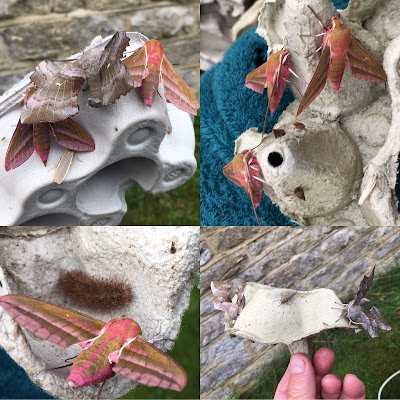 Moths are pouring in at the moment and here are some of my other recent callers:


Posted by Martin Wainwright at 19:15