Me and my moth 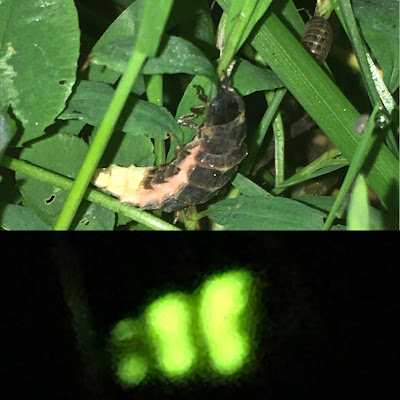 It's glowworm time again and a couple of rambles after dark have reassured us that the bright little lights are still there. Penny and I first discovered them here last year, as recorded on the blog at the time, and the hawk-eyed younger neighbour who helped us then reminded us the other day that it was time to have another look.
I found three on the first night at about 11.15pm and then a small group of us discovered another three a little earlier on the following evening. Most of them were at the roots of long grass mixed with nettles which made them pretty inaccessible and one was a way off on railway ballast. But the last we spotted was almost under our feet at the edge of a very well-used path. With the help of Penny winding vigorously on our clockwork torch, I managed to get the reasonable well-focussed picture of a glowing female, above. If anyone knows what her small companion is, I'd be grateful to be told. We think it's a wood louse, or Roly-Poly as the Americans call them, but maybe it has some glowworm connection. 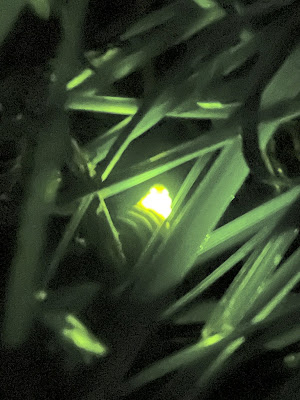 The moths have been very good lately; this is their peak season, and some of my recent arrivals are shown above. Top left, we have my old favourite The Drinker, showing its strange, almost mammalian snout. To the right of it is one of my annual delights, a well-named Bordered Beauty whose wing fringe blends so well with the brown eggbox that the moth appears to end higher up.  Beside it is a Muslin Footman with its curiously blurred pattern of spots, a clever version of the optical 'dazzle' camouflage seen in many species, such as the standrad Peppered moth and the Black Arches. 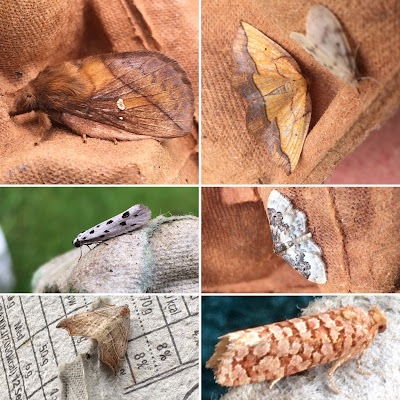 The second line of pics shows an interesting new micro arrival, Ethmia dodecea, whose gradual advance from being a rarity in this region has been recorded on the invaluable Upper Thames Moths blog over the past few years. As recently as 2016, it had only been recorded in our region at a few sites in south west Bucks. It has a look of the common Ermine micros but many fewer and much larger spots. Beside it is a pretty little Least Carpet and then in the bottom row we have another aptly-named moth, the Beautiful Hook-tip and the shrimpish micro with a hefty name: Lozotaeniodes formosana 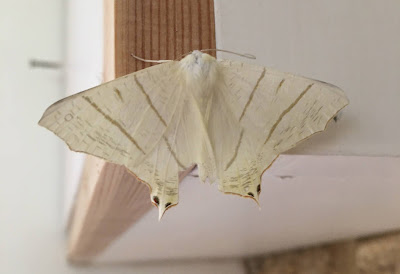 The delicate, rather ghostly Swallowtailed moth is a regular visitor at the moment, not just to the trap but in the house. I tried to usher this one outside after Penny found it in the loo, but after fluttering around a bit, it settled on the side of my nose. Thanks to the wonders of selfie mode, I can show this touching scene to you below. 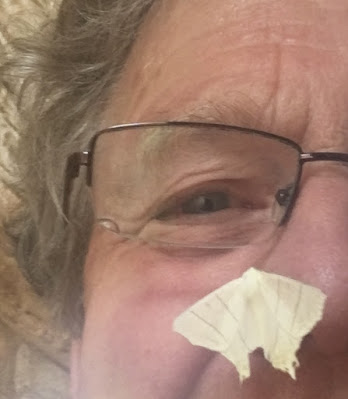 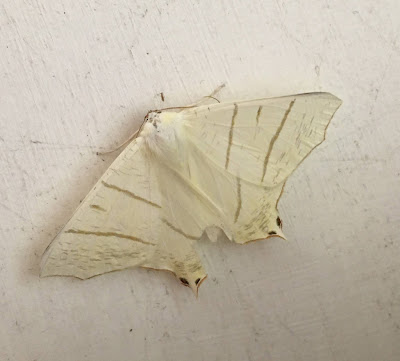 I'm about to go out and examine today's trap, when my iPhone has powered up a little more and after the current light rain has stopped.  I have discovered a new way - below - to add to the impressive protection given in wet weather by Mr and Mrs Robinson's excellently-designed rain cap. 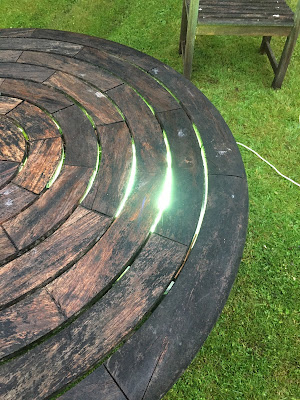 Posted by Martin Wainwright at 07:30