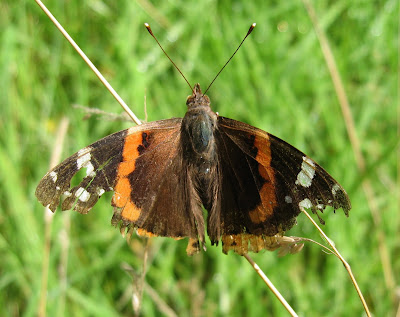 Life isn't easy for a butterfly, or for moths. We met this brave old Red Admiral on a lovely walk up the Wharfe from Addingham and then back through Lob Wood, with its murk-enshrouded old rail track, victim of Beeching, and then over the brow of the hill above Farfield Hall and its ancient Quaker meeting house. Look what a battering the Red Admiral has had, but it was still flying gamely around. Actually, it attracted my attention because it clearly wasn't a Gatekeeper or Wall butterfly - too much colour - but it had none of the swooping and soaring of Red Admirals or Small Tortoiseshells in their prime. Once it settled, I saw why. It's like one of the half-wrecked bombers which used to limp back to Yorkshire airfields during the Second World War. 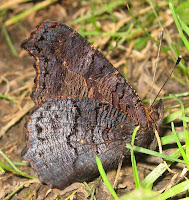 In Lob Wood, I took this pic of a Peacock at rest. The flash worked automatically and lit up the strange, scorched pattern. Compare it to the vivid overwings of the Peacock in the post four below. What an interesting natural history lesson. One insect, two defences: the overwings with bright warning colours and fake 'eyes' to scare off predators; the underwing camouflaged to make the insect invisible, like an old fallen leaf.
Yo! This is blog post 200 according to Google's infallible stats. A break now, though, because my older son and his lovely bride are getting married, and moths take second place to that. (Though, who knows, one may flutter by to bless their happiness).
Posted by MartinWainwright at 07:09

I just found your blog- wonderful! Do you Twitter? My husband has a blog about our conservation garden in Montana. montanawildlifegardener.blogspot.com
Best wishes, Marilyn

Hi Marilyn! Thanks very much for your nice comment and I shall hastent o read the Montana blog. Montana! What a romantic name to us here in rainy old England. Mind you, I've just been to our own mini-Montana, the Lake District, for a family birthday, hot on the heels of my son's wedding which went off brilliantly. Now I must go and out out the moth trap for the first time in several days. Oh and Yes, I do Tweet but inly when I'm working on running stories for the Guardian. I just can't find time otherwise. But I'll catch up one day. Warm wishes, Martin