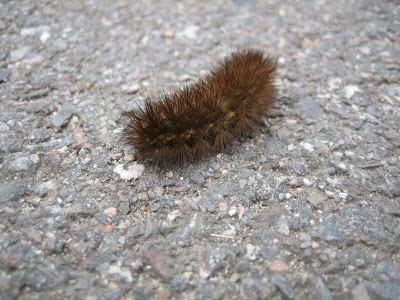 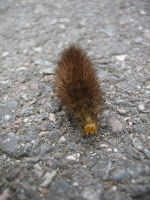 One more holiday despatch and then we'll be back to trapping in Leeds. Mind you, I don't envisage more than a week or so before the season ends, because it's getting cold and also dark in the morning when I sally forth, camera in hand. This picture is of Lyme Regis; a very small part of the path through the pleasant linear park above the harbour, beach and Cobb. My Mum and I were pottering along enjoying the flowers when we saw this caterpillar. Unusually, it was going round and round in circles, not at all like the purposeful Peacock catties I mentioned on 6 July (all heading across a cycleway in Richmond, North Yorks, in the same direction and at exactly the same angle). I knelt down to take the photos, attracting a certain amount of interest and thus spreading the moth word. Mum was more concerned to shepherd it to safety, which is what we then did. It's what we used to call a 'woolly bear' when kids, but that's very unscientific. My best guess is a Buff Ermine but please put me right if I'm wrong, gang.
Being in Dorset reminds me that I promised I'd give my final verdict on The Behaviour of Moths by Poppy Adams, the novel which I mentioned here on 2 September. Dorset is where the action takes place. Well, I'd still recommend it but don't expect moth enthusiasts to come out smelling of roses. I mustn't spoil the ending but I prefer happy ones. Enough said...
Posted by MartinWainwright at 12:35