Rear Admiral of the Red 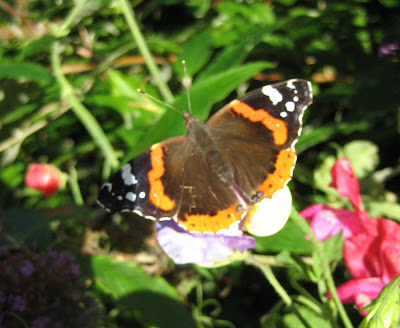 Here's another Red Admiral, seen less than a week after the tattered old veteran I showed on 3 September. What a difference. The contrast makes the point about the different generations of some butterflies. Like us, Red Admirals keep breeding in the summer, so that a pensioner such as the one at Addingham can be flying at the same time as a beautiful youngster in her equivalent of the twenties, like this one. There are plenty on the buddleia still and quite a few have the lovely white fringe which marks a recently-hatched butterfly (or one which has been lucky enough to lead a quiet life), as in this case.
More evidence that butterflies and moths can read, meanwhile. Veteran readers will know of my fascination with the way moths go for the barcode on the eggboxes in the trap. Here, Andrew Turner from Northampton has kindly sent me these pics of a Speckled Wood examining details of the excellent Ryton Organic Gardens in Warwickshire (www.gardenorganic.org.uk/gardens/ryton.php). 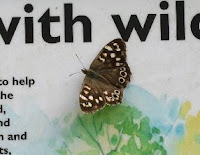 Our son's wedding was in Warwickshire, between Leamington Spa and Warwick, and I was most impressed by the gentle countryside (and also the Red Lion at Hunningham (http://redlionhunningham.co.uk/?page_id=43) and the Hilltop Farm shop in the same village (www.hilltopfarmshop.com/) Goodness, this is like a tourist brochure, but why not? As for my title, fellow readers of Hornblower long ago may recognise it. I was always fascinated by the gradations of Royal Navy admirals, based on the red, white and blue of the national flag. The butterfly's name, however, is an elision of the original 'Admirable', like 'Elephant and Castle' which supposedly comes from Henry VIII's campaign to blacken the name of his first wife Catherine of Aragon, aka the Infanta of Castille. 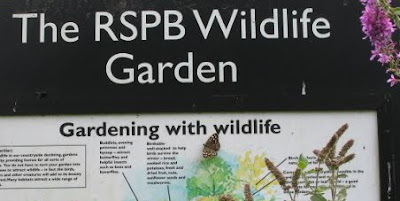