YES! It's Moth of the Year

So this is it, dear reader. Cold, wet, darkness and the paucity of moths mean the end of full-scale trapping for 2013. Penny will be relieved to have the chance to talk about something else.

It has been as sensational a year as I expected with our move from Leeds to Oxfordshire; not so much in overall numbers or even variety of species, but thanks to the almost daily succession of novelties which are the main fascination for a sadly unscientific but curious amateur such as myself.

This has given my annual (well, since last year, anyway) Moth of the Year competition a dazzling array of finalists. There has been very little which would arouse the scorn of Simon Cowell or the gentle letdowns of his kinder judges on TV. But I have a runaway winner, as assiduous readers will be expecting. Ever since I heard its name, I have longed to see a Merveille du Jour.  Now I have and I am in no way disappointed. (Do you like my specially themed text background colours btw?) 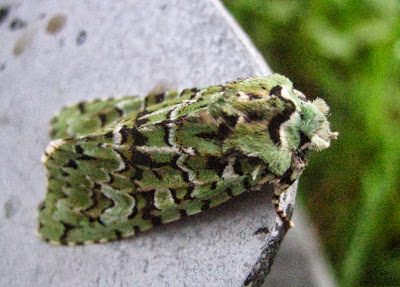 I was lucky. I saw only the one and on one night only. A fellow enthusiast-comments on the Upper Thames Butterfly Conservation website that he has heard 'murmurs' of a merveilleuse année for the moth but has not experienced that himself. It may be categorised as 'common' but it rations its appearances and I am grateful that one of them was for me.

Update: I am very chuffed that the writer and general expert Gillian Darley has Tweeted that my moth looks like 'a mad chenille tablecloth' - a very appropriate description what with 'chenille' being the French for caterpillar. I learned that as a boy on family holidays when I enlisted passing Francais in my chenille hunts. The textile etymology is here.

The runner-up is that magnificent creature the Privet Hawk Moth, the largest of the UK tribe that any of us are likely to see. Only the Death's Head and Convolvulus bigger are bigger. I am specially pleased by the circumstances surrounding my first-ever meeting with one: as well as lovely surroundings, we are blessed in our new home with specially nice neighbours and, on learning of my moth mania, one of them dug out an old photo he'd taken of a Privet Hawk, complete with a ruler for scale. The real thing arrived just a few days later. 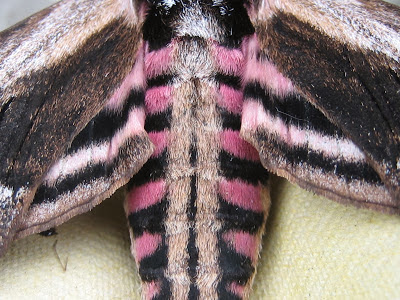 The bronze medal should in fairness be shared by many lovely moths but I have plumped for one, familiar to me in Leeds but glowingly beautiful here, especially when shown against a background of my famous trap-inspecting pyjamas. Lempke's Gold Spot is a dazzling little creature. Update: sorry - see Dave's comment below; this will be a standard Gold Spot rather than Lempke's. Many thanks D. Only the Gold Spangle beats it in my estimation; and that remains a star of the north, at least for now. 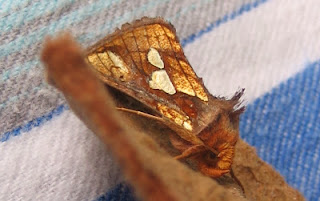 I have gone on long enough - a feature of the blog which has grown in posts from 100 in 2008 to 123, 134, 158, 165 and now 196 so far this year. It will probably reach 200 by New Year's Eve because I will light the lamp in a desultory fashion between now and April. But in the meanwhile, very many thanks to everyone who has dropped in, to those who have kindly commented and especially to my regular experts who try again and again to keep my dodgy IDs on the straight and narrow.
Posted by MartinWainwright at 08:36

Very glad to see the famous PJs get a mention. Interesting to compare numbers- this is my first year and the trap's only been out since June. I'm currently at 313 (as you, I expect it's higher but the micros are a mine field!). I've no idea whether that is good or bad, but suspect this is a good moth area because of the amount of natural vegetation. Be interesting to see next year. CT :-)

Hi there and many thanks for all your observations. I think 313 is a magnificent tally. Good luck over the winter and here's to the return of Spring. All v best M

Hi Martin,
love to keep up with your Blog!
My trap has gone away for the winter,the weather up here in the nymnpark is already baltic,with the temperature not exceeding 10deg C yet this month!
Ive just invested in a new book"common micr moths of Berkshire" it is superb,with excellent pictures and comparisons,well worth treating yourself for xmas!
cheers G.F.

Hi there - thanks ever so. I'll be thinking of you on your lovely but chilly moors over the winter. I've just been talking about Whitbey to a fellow enthusiast for the 'fossil coast' down here and it added to our determination to be back there soon. Thanks very much for the Berkshire book tip which I'll pass discreetly on to my possible Christmas present providers...

Hi Martin, your Lempke's looks more like a standard Gold Spot to me, I'm afraid. Lempke's would be a REALLY good find this far south. Cheers, Dave Wilton

Thanks very much Dave and I am sure you are right - I'm so impressed by your IDs, specially of micros, which have taken the Upper Thames Butterfly Conservation tally of moths this year to 989 to date. I have a long way to go...

Merry Christmas and to all,