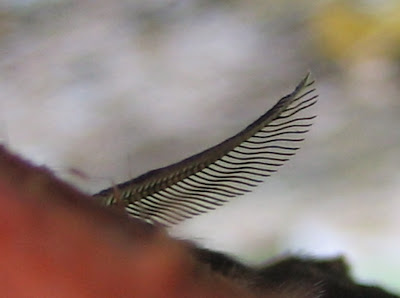 The trap seemed empty this morning, apart from a solitary earwig, until I spotted this. It's the delicate antenna of a slumbering December moth. At least I think that it was slumbering; it is unusual in my experience for moths to sleep with their antennae outspread. Maybe it was keeping half an eye out although it didn't stir while I took several pics. 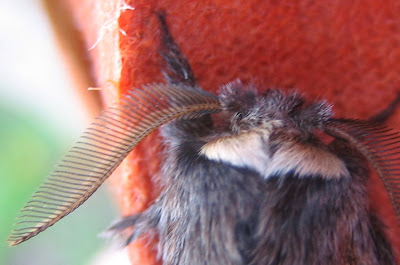 The paucity of visitors was no surprise. It started raining shortly after I lit the lamp at 6pm and was going at it cats and dogs when I decided to switch things off at around 10.30pm. We are very close to the end of the season now, although last year in Leeds I had a very nice surprise when the Mottled Umbers arrived in late October and swooped off with the title of My Favourite Moth for 2012. 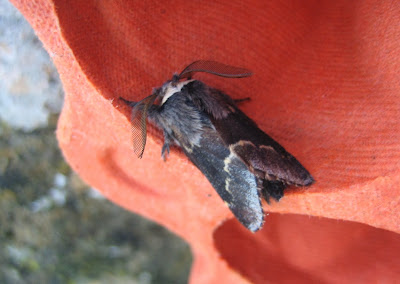 There were still come good things to be had in November, too, but essentially I'm winding down now and will shortly complete a Good Housekeeping audit of the moths which have flocked here for my first year in Oxfordshire. Then it will be time to clean things down and give the trap, myself and most importantly the moths, a winter's rest.
Posted by MartinWainwright at 08:41

They are great moths for a drab time of the year, and they should keep coming for a good while