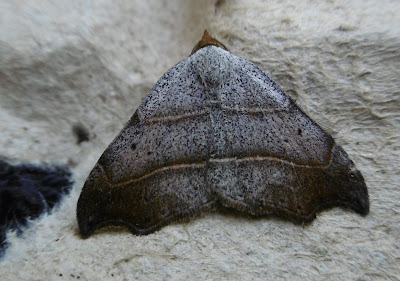 The prefix 'Beautiful' is applied to nine UK macro-moths, all of which deserve it, even the rather paradoxical Beautiful Snout. Sometimes it can seem a little unfair, if deserved; for example, in the case of the Beautiful and the Plain Golden Y, both of which are...um...beautiful.


Today's top moth is a cracker in my book, the Beautiful Hook-tip. It is fairly small and its colourway is anything but flashy. But the combination of subtle tones and pattern with the unusual and appealing wing edge is pretty hard to beat.

It's only locally common albeit spreading well. The first to be caught in Yorkshire for 120 years was found in 1997.  It shared the trap with one of the most definite examples of the form aurea of the Burnished Brass (above) - which has its brassy strips separated by brown as opposed to the connecting brassy strip in form juncta - that I have seen for some years.

Also overnight was my first Brown-line Bright-eye of the year (two above), a moth whose name is muddlingly similar to the very different-looking Bright-line Brown-eye, (just above) a more frequent visito - indeed I used a picture of two of them side-by-side two posts ago.

Talking of muddly moths, here is a useful coincidence of a Heart and Dart snoozing next to a Heart and Club, also in the trap last night. I hope I've got them right...

Posted by Martin Wainwright at 11:15