The nights have gone icy again and the moth trap is largely shunned. By contrast, the days have been sunny, bright and even genuinely warm. On cue, out come the butterflies'
The Brimstone is traditionally the earliest in the UK. Some say that the word butterfly stems from this; the 'butter-coloured fly' which cheers everyone up at the very beginning of Spring. I saw my first of 2021 on 24 February, as reported in the last post. It was more of a 'lemon-coloured fly' which denotes the male. It was skittery and would not stop for a picture. Checking back on my records, it was the earliest I have seen but only by one day. 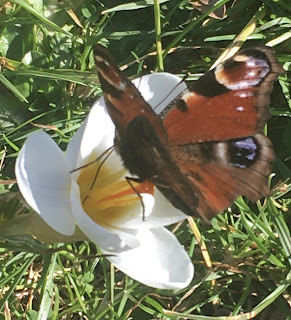 I have seen several Small Tortoiseshells, venturing out from hibernation, and Sunday brought this beautiful Peacock to add extra loveliness to one of our crocuses, or croci as the Romans would doubtless have said. Talking of loveliness, that is the word for a gathering of ladybirds. We have a lot of loveliness of that kind around just now. Here are some examples, on two of the grandchildren's arms and in our honeysuckle which P was trimming (extremely carefully). 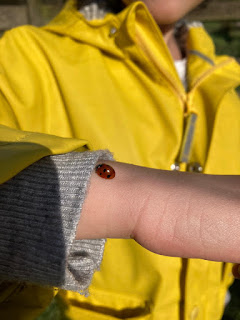 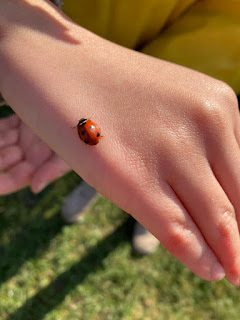 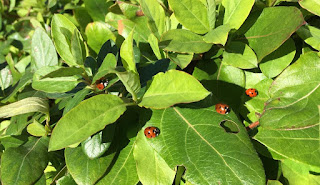 I did put the light trap out a couple of nights ago and went to have a look at 11pm. These two moths were snuggling on to the nearby wall. I took these rather poor photos and confidently expected them to be there in the morning. They weren't, and there was nothing actually in the trap either. 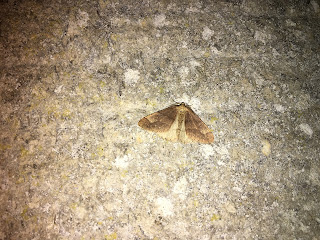 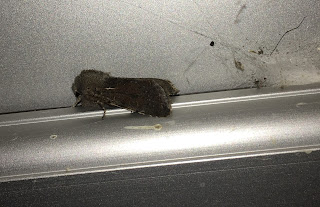 The first is a Dotted Border but the second had me puzzled. As always in such cases, I posted it on the unfailingly helpful Upper Thames Moths blog and Bingo! Tim Arnold and Dave Wilton identified it as a Clouded Drab, a common species but new for me this year.  I like Tim's description of the moth as like 'a watercolour painting in which the colour has run more than intended'.
Posted by Martin Wainwright at 20:09

Even though it doesn't need confirmation, I think that's a Clouded Drab. I do feel sorry for that moth's name though. It's more of a description of the weather here this morning!

Thanks Edward! I agree about the name. There's also the Lead-coloured Drab though I've never seen it. Nothing like rubbing it in

PS what I thought was my last MV bulb went the other day and they're getting hard to find. But I rediscovered one I ordered off the internet a couple of years ago. Haven't tried it yet but it's been safely packaged and undisturbed

Phew! They are getting scarce now!
Re names: there is a bird called the Drab Seedeater, rubbing it in; they've taken that far!

Ben - great to see you and I hope all goes well with you. I just read your v helpful comment in time, while finishing off my next post - very many thanks! all warmest M