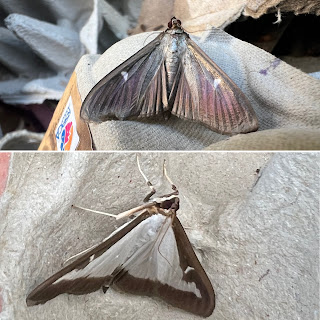 A couple of interesting moths today which would have been a great surprise to anyone finding them only a few years ago. The first is the Box Tree moth, above, which was accidentally introduced to the UK in the early years of this century - the first record was in 2007.  It has flourished mightily and I get both its forms, the melanistic one on top and the standard version below. It is very bad news for owners of box hedges who fortunately do not include me. An infestation of caterpillars can doom a National Trust knot garden. Mind you, think of all the clipping box involves... 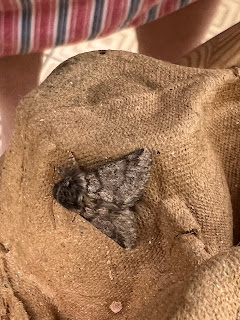 The second invader is the Oak Tree Processionary, which looks like a monochrome version of the Nut-tree Tussock and is also considered a potential threat,  this time to the good old English oak. Large concentrations of its caterpillars can strip a tree of its leaves, making it much more vulnerable to other pests.
The moth was introduced to England by mistake in 2005 and has expanded beyond its original toehold in London in spite of Government attempts at control. This is the first to visit me but others are being reported increasingoy on the Upper Thames Moths blog. Perhaps the most remarkable behavioural side of the species is the caterpillars' communal progress which accounts for its name. Here is a telling picture from the Government's Forest Research website. 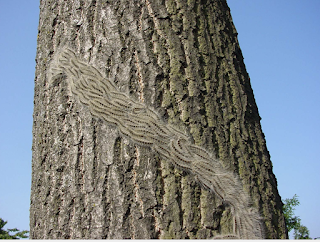 In a happier part of the moth realm, here are a couple of pictures of the delicate Latticed Heath, a dainty moth which appears to believe that it is a butterfly. It looks like a relative of the Duke of Burgundy Fritillary, holds its wings in butterfly-style and even has butterflyish antennae. 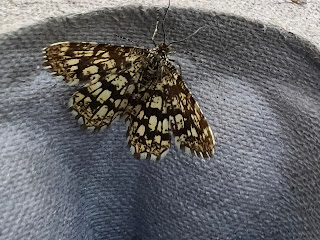 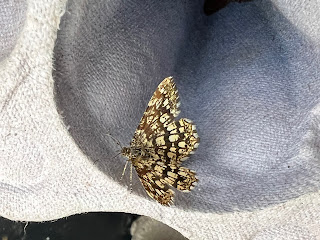 Also in the graceful ranks of small moths, I'm always pleased to see a Single-dotted Wave like the one below, partly because it gives me yet another occasion to wonder which of its many dots is responsible for its name. 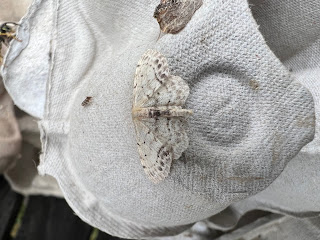 Talking of butterflies, we were back with the grandchildren after out holiday and I was pleased to catch a Holly Blue on their buddleia after prolonged stalking, in company with our two-year-old. He then proved his spurs by spotting this splendid Jersey Tiger, below, on the way to one of the local Walthamstow parks.  As Conehead regularly bears witness in Comments, this is now a common moth in London and we saw two more later on in the lovely gardens and open-air café of the Vestry House museum. 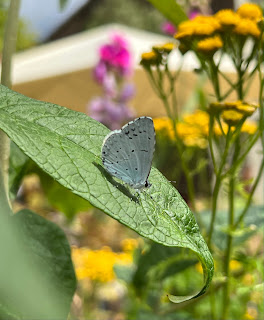 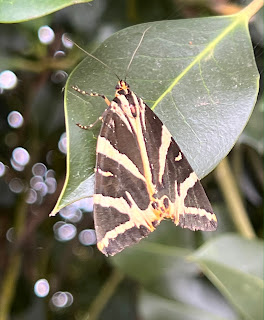 Finally, more of the many moths which have poured in here over the last two weeks: Copper (or Svennson's Copper) Underwing, Um.., Er..Knot Grass? Marbled Beauty, Orange Swift, Shaded Broad-bar, Carcina quercana, Um again.., and finally a Swallow Prominent.
In the second composite: Red Twin-spot Carpet, my Single-dotted Wave again (but I won't make any dot remarks), Yellow Shell and a Mother-of-Pearl, Dusky Sallow, July Highflyer, Least Carpet, the Oak Processionary once more, a Sallow Kitten and the everlasting Elephant Hawk moth.  Apologies for the repeats; my compositing sometimes gets out of hand. 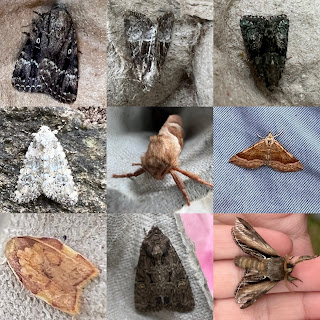 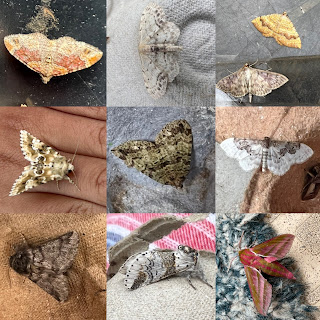 Posted by Martin Wainwright at 06:57

Some lovely moths there, i particularly like the Latticed Heath. For your first composite i would hang my hat (precariously) on Cloaked Minor for the top-middle one which you speculated Knot Grass for. I would go Tree lichen Beauty for Top-right, which i don't think you put a name against. I'm basing this on the photos in Chris Manleys 'British Moths second edition' if you have it, as the painting in Waring et al is pretty inclusive for that one imo. Your other um er,middle-bottom picture, i'm thinking Flounced or Common Rustic...as i'm edging towards Flounced its probably more likely Common ;) Hello, UTM? It's Martin again... :)