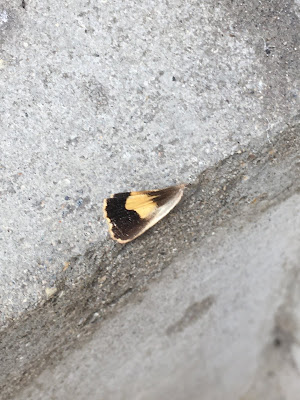 One of my other hobbies is playing Fives as a born-again incompetent and I was very pleased when it crossed paths with my interest in moths a couple of weeks ago. I have never been good at sports of any kind but I always enjoyed this game at school - basically hitting a ball against an oddly-shaped wall with a padded glove - and took it up again the year before the pandemic.
It's described as 'the fastest ball game on Earth' which could not be more misleading in the case of our veterans' group; none of us have felt remotely close to a heart attack during play. We spend roughly half the time holding learned conversations, a practice known in the 18th century as 'coffee-housing' which is defined in the Oxford English Dictionary as 'talking while playing a sport'. 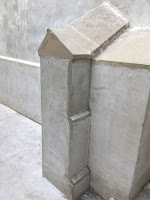 Much of our chatter relates to the fiendishly complicated laws and fascinating history of Fives, the latter accounting for the curious architecture of the court. The game was often played against a church wall and was codified by boys and teachers at Eton who used a buttress on the side of their school chapel. This became the model for today's courts used in the standard version. Needless to say, there are many variants including Rugby, Winchester and even Warminster Fives.
The moth remnant, just visible in the picture below on the sloping edge of the buttress - one of the many surfaces which send the ball flying all over the place - was a hindwing from a Lesser Broad-bordered Yellow Underwing. Its nemesis will have been one of the spiders whose many cobwebs form an unintended additional challenge at Oxford University sports centre in Iffley Road. The two Eton Fives courts there are a great boon for us, because they are not all the common in the UK, but it would be lovely if they were better-used. 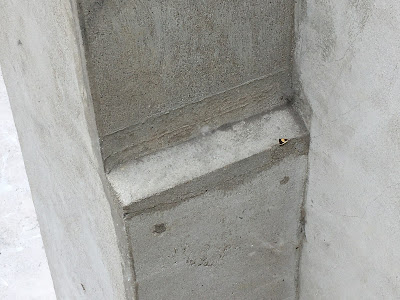 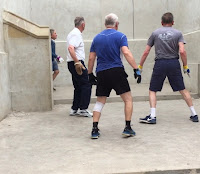 Here's a glimpse of me playing too, just after a successful return of the ball from behind the buttress where I had been examining the sad little bit of moth. Back home, it was a pleasure to find a Tawny-barred Angle in the eggboxes, a common UK moth but one which I have seen very seldom both here and in Leeds pre-2013. 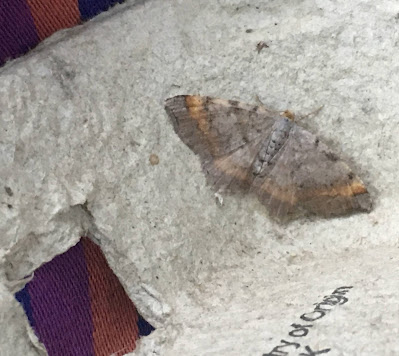 Rather similar colouring marks the Iron Prominent below, a photo which unusually captures it with its wings outstretched. My tastefully vivid pyjamas make an appearance as well. Then we have it again in its usual resting position, alongside a big Old Lady moth which later perched on one of my granddaughter's fingers, as shown in my final photo, while a Gold Spot occupied another. 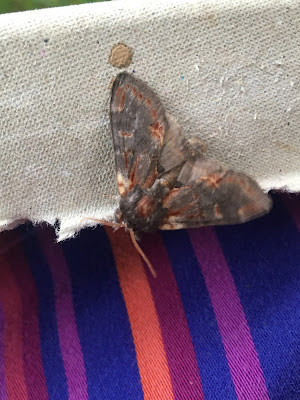 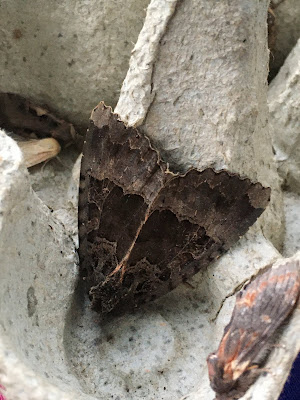 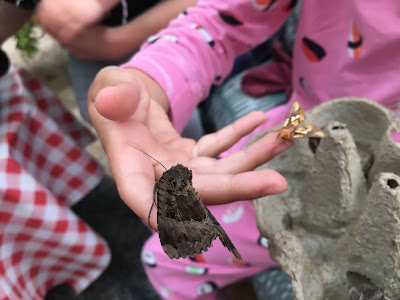 Posted by Martin Wainwright at 15:27