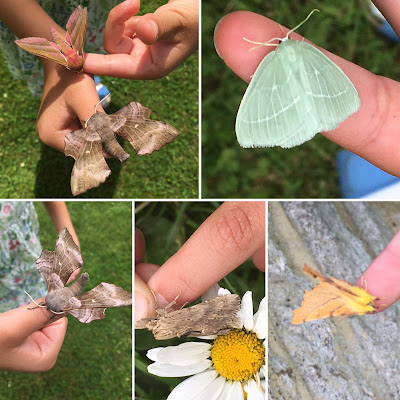 Guess who've been visiting? Yes, the moth-fancying grandchildren who take a great - and increasingly knowledgeable - delight in getting to know the arrivals in my light trap. The oldest indeed - a mighty six years - earned the title during her Granny's birthday celebrations of the 'Moth Whisperer' because she had such a calming effect on a Poplar Hawk moth. This was initially keen to get out of a large shoe box to which I transferred it after checking the eggboxes before breakfast, but it ended up spending the whole day calmly in attendance on her. Just before the family left, she took me to see it resting peacefully on a gaudy alstroemeria, to say 'Goodbye'. 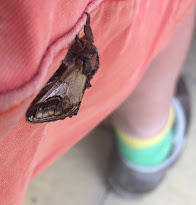 She is currently planning a book with a chapter called 'Moths where they Shouldn't Be', including this Pebble Prominent on Grandpa's trousers, left. More scientifically, it intends to look at the insects' eating habits and the digital version - what a modern age we live in - will offer her little film below.
This was made after she skipped across and said: "Grandpa come and see this moth's tongue!" Somewhat sceptically, I reluctantly abandoned my slice of birthday cake and hauled myself out of my deckchair, but I'm glad I did. I managed to sidestep the issue of which of the various annoyingly similar browny-type moths this actually was, by admiring her hawk-eyed investigation and having a discussion about nectaring and how long moths live. 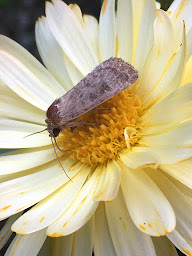 Here's a still picture of the same diner, right, showing its proboscis (a useful new word for my granddaughter) deep in the flower's honey larder. Earlier, meanwhile, her sharp eyes had spotted a whole succession of moths which I had missed on the wall of the house near to the light trap: a Peppered (which I'm glad to say had already featured in her lessons because of its famous role in camouflage and natural selection); a Yellow-tail (albeit with the reason for its name concealed), a Cherry-tree Ermine micro and what I think is a faded Willow Beauty. 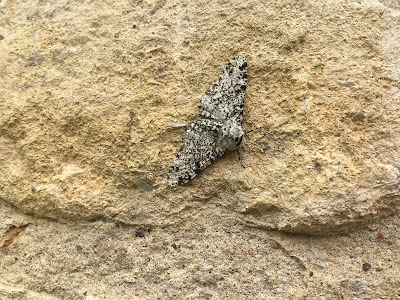 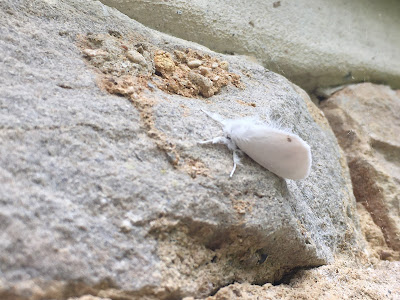 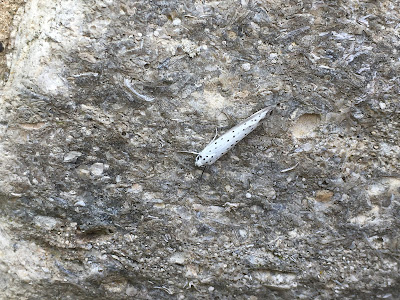 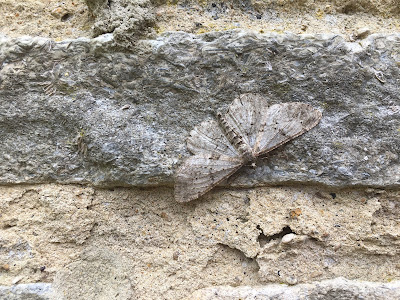 The ability of these moths to conceal themselves against the stone struck my granddaughter and she took the lesson on board when asking for photos for her proposed book. A chapter on Moths and Camouflage is on her list and here is a possible illustration: a Smoky Wainscot looking very similar to the matting against which she posed it. 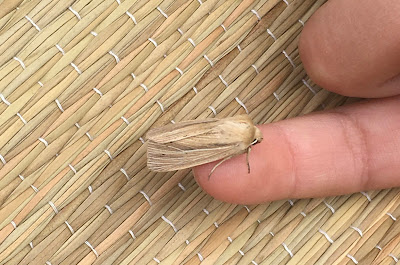 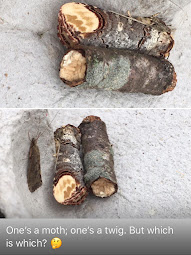 In this context, a final source of pleasure and wisdom during a great celebratory day was finding this Buff-tip below, a moth which always delights children of all ages because of its marvellous resemblance to a twig. This one was almost as obliging as the Poplar Hawk in becoming a grandchild's friend and I looked out my recent picture of another one alongside an actual twig to show how close the resemblance is. The picture on the left is from a family WhatsApp group called Insect Chat 🐞 which thoughtfully excludes one or two relatives who aren't so smitten with creeping things. I'm glad to say that it's busy enough with contributions to constitute a small rival to iRecord. 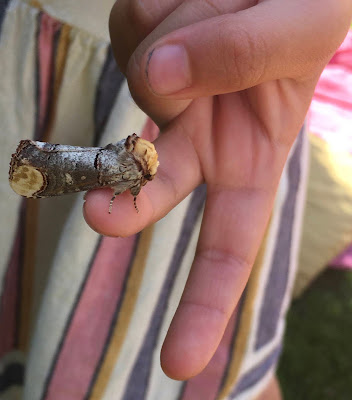 Posted by Martin Wainwright at 07:35

Thanks as ever, Edward. More in the next two posts. All vb M