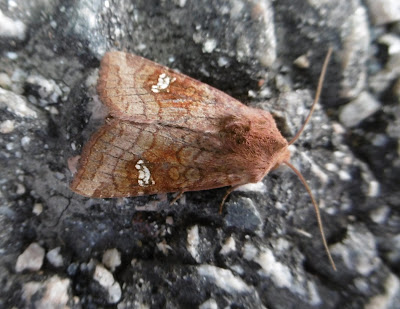 I promised to return to the subject of the Ear Moth found in my granddaughter's buggy on Colonsay, and here I am, doing so.  Warning: I do so at some length. I've found it interesting, especially as it led me to an online version, hosted by Butterfly Conservation, of a superb but out-of-print book on identifying difficult UK macromoths.

Faithful readers do not need telling about my deficiencies in this department; and reading about the differences between the four types of Ear - standard, Large, Crinan and Saltern - does not fill me with optimism about my chances of improving. This is partly because to be absolutely sure of an Ear's ID, there is no alternative to killing and dissecting the insect. That is the only way to see the minute differences in the genitalia which incontrovertibly tell them apart.

Here they are, below, in Richard Lewington's brilliant paintings in the Moth Bible. They presented him with an impossible challenge; although they look slightly different on the page, the range and variety of colours and patterns found in all four makes the notion of a 'type' specimen for any of them idle.

The online book is more encouraging about other similar species which cause me grief, so I can say genuinely: I will try harder. My Ear question is however insoluable; all four species are found in the Hebrides and my actual moth is hundreds of miles away on Colonsay and safe from dissection (although the chances are that it is inside the tummy of a bat or bird).

The fact that the four different species have been teased apart is a tribute to human curiosity and it intrigued me to know who came across the differences in a moth which the great Linnaeus classified simply as Amphipoea oculea, the standard Ear,  in the 1760s. The Large and Saltern Ears were named by the German entomologist Christian Friedrich Freyer (1794-1885) who has a great many eponymous insects including Freyer's Fritillary and Freyer's Pug. He looks a cheery soul - see Wikipedia picture left. The Crinan followed almost a century later, thanks to Rev Charles Rich Nelson Burrows, vicar of Mucking in Essex from 1897 to 1933.  I was discussing these complex matters over early morning tea with Penny this morning and she said: "It was probably all down to one of those 19th century vicars with not much else to do." You can see why I married her.

Crinan, meanwhile. is a village in Argyll and 'saltern' refers to seawater pools left to evaporate for the salt they contain. To add further complications, there is a sub-species paludis of the Saltern Ear, discovered by the great Victorian entomologist William Tutt, and there are areas in western Scotland where the Large and Saltern Ears have hybridised and specimens found with what are un-nervingly called 'intermediate genitalia'. 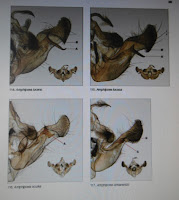 For your delectation and to tempt you to visit Butterfly Conservation's online site, here is a screenshot of the four different sets of 'bits'.

A final question which occurred to me relates to the scientific names of the four. They all share the 1820s coining of Amphipoea, meaning 'both or two' of something - I'm not yet sure what. Their second names are oculea (eye-like) for the standard Ear Moth, lucens (shining) for the Large Ear, fucosa (beautified) for the Saltern and crinanensis (from Crinan) for the Crinan. Paludis means 'of the swamp or marsh'.  Perhaps the second and third of these refer to aspects of the moths' genitalia but if so, I do not see it myself.

The issue of killing moths, which most enthusiasts used to do before the invention of today's excellent digital cameras, came up via a brief return to journalism which I undertook while away. My old employer the Guardian emailed, asking me to write a Comment piece on the suggestion from Butterfly Conservation that moth-trapping has become the UK's fastest-growing natural history hobby. Hooray, if so.

I was a bit reluctant, being on holiday, but the call of the moth proved too strong, so I got up early and bashed it out. Things were made slightly more dramatic by my iPad's failure to save the article twice, on each occasion when I'd almost finished it but had to check something. But luckily my memory cells still work.  If interested, you can read it here.

The thread of readers' views repays reading, as usual, and I was interested in the level of concern about not killing things. I share this, although there is little or no sentiment shown in the daily slaughterhouse which is the world of wild creatures. But this, admittedly rather long, essay on the Ears maybe shows why it sometimes has to be done.
Posted by MartinWainwright at 12:52

Hi Martin,
The level of concern would stop short overnight if the concerned folk were told of the approximate amount of moths/bugs they kill on their vehicle number plates alone after just one hour of driving after dark on a warm evening. One hour, once a year, one car.
The answer is in the vicinity of 1,000 x the amount that I have sent for dissection in the last 5 years.
It kinda puts this emotive subject into perspective especially when you multiply the one hour drive by the amount of cars on the road.
Not to mention the amount of moths killed by the very same drivers when they clip the garden hedge and trim the shrubs killing millions of leaf miners in the ensuing crush of the mulching machine or the incinerator burn.
Not forgetting the amount killed by the chemical sprays used to achieve a "town planner" garden loved by many, hated by the more enlightened :)
Once they understand that they may not be so squeamish about the killing of a moth in the pursuit of knowledge.
That's my take on it for what it's worth.
Nice Ear Moth sp. by the way. I've yet to see one.
And the Scottish Isles are on my must see list.
Cheers

Hi Martin, do you have "The Scientific names of the British Lepidoptera - their history and meaning" by the late, great A. Maitland Emmet?:
http://www.pensoft.net/book/9724/the-scientific-names-of-the-british-lepidoptera-their-history-and-meaning

It's a fascinating book by a master entomologist and classics scholar. For "Amphipoea" he says "amphi" means round, and "poa" means grass, referring to the moths' habitat. It seems clear that "crinanensis" refers to the Crinan Canal, which is apparently the location of capture for the 'type' for this species, and "oculea" refers to the 'eye', that is the reniform stigma marking on the wing. The others are less clear cut - "fucosa" translates as "painted", and Emmet thinks it likely that this was meant to indicate a copy (maybe a counterfeit copy) of oculea, hinting at how similar they are (although he also gives "beautiful" as another possibility). And finally "lucens" does mean shining, but it's not clear to Emmet whether this refers to the generally glossy appearance on the moth, or to the bright spot on the wing.

Sadly my own classics education is sadly lacking, and I suspect there are rather fewer entomologists nowadays who could compile such a gloriously pedantic and informative compendium as Maitland Emmet's!

Hi both - and very many apologies for the delay. I seem to have been a bit hectic, what with Convolvulus Hawkmoths buzzing about everywhere. A slight exaggeration, but anyway, I'm really sorry cos these are such interesting subjects.

Trent, I agree with you about the exaggerated fuss over the killing of a small number of insects for ID and other examination which is not only reputable but extremely useful and ultimately in the interest of all nature. I'd go so far as to say that young enthusiasts should not be discouraged from collecting as this has been the source of much enthusiasm and expertise among naturalists in times past - and how many young people can afford a decent difital camera?

I remember reading how the young Darwin initially decided only to keep any insects and other creatures which he found dead, but this altruism did not last long in the face of practicalities. I also seem to recall from past reading that there is only instance in the UK where collecting was definitely a contributory factor in the decline/loss of a species - when commercial collectors helped to wipe out the Large Copper from its last East Anglian strongholds in the 19th century.

Martin, I'm very much obliged for the details of that wonderful book which I had come across but had lost the reference. I will now embark on very careful diplomacy with Penny who has an informal and understandable, but quite firm, ban on our getting any more books - unless, like the Samuel Pepys library at magdalene Coll, Cambridge, we get rid of an existing one as part of the deal. Which I am loath to do. Thanks too for mentioning the recent Guardian piece on Upper Thames Moths, much appreciated. What a source of wisdom that blog is!

all warm wishes and thanks gain - and sorry again