I was grumbling away this morning about the absence of moths in this chilly, dull weather when, as often happens, I got a pleasant last-minute surprise. On the edge of the third last egg box was perched this Lunar Marbled Brown, deeply asleep but showing only one side to my camera. 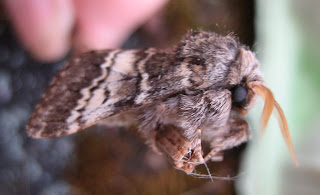 A late Spring moth at last! And a very handsome one, patterned like one of those high quality camping rugs they used to make at Witney Blankets in what is now David Cameron's constituency. My other blanket story involves an old family friend John Walker, sadly no longer with us, who was both head of a blanket-making company in the Spen Valley and chairman of the magistrates' bench in Dewsbury.

He chaired the hearing when Peter Sutcliffe, the 'Yorkshire Ripper', first appeared in court, and then went back to the mill where the atmosphere was tense. Sutcliffe's reign of terror was exactly that; I remember the widespread sense of fear before he was caught. But John defused things, as staff left their machines and crowded round for news, by saying: 'I'll tell you this first: the blanket he had over his head when they took him into court from the police van, was one of ours.' 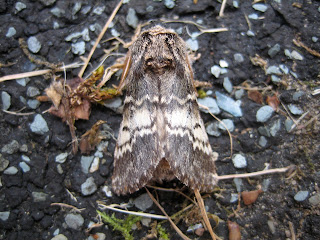 Here's the Lunar Marble Brown again; above and below, for you to feast your eyes on its subtle colours. With luck, there should be more new and interesting arrivals in the trap as we get properly started on May. I am specially hoping for great things on the 18th. It's my birthday. 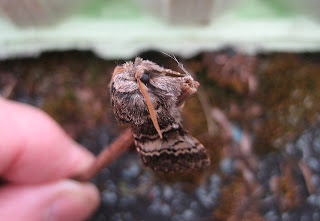 Your LMB is certainly a lovely moth (not had one yet this year), just about makes up for the general lack of moths at the moment.

Thanks v much Dave. I wish my pictures were as good as yours, though. You'll no doubt be looking forward to the Micro moths book, notbthat you need it!

Trap empty again last night. It's so chilly for the time of year. But a good moon, and lovely and clear this morning