It's a moth's life

Who'd be a moth, especially a little one like this? It probably hasn't lived much more than a week or two, but already it's got a chunk out of its trailing edge like a Spitfire returning from a dogfight. It reminds me of that wartime RAF sketch from Beyond the Fringe where Peter Cook sends Jonathan Miller out on a suicide mission ("Another, sir?) and when Miller says: "Goodbye then, sir - or is it au revoir?", replies firmly: "No". 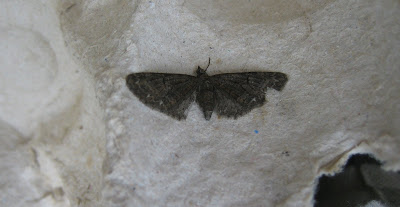 So many hazards beset a moth; even violent gusts of wind might disable a scrap like this. I think this is a Common Pug, although my record in identification may not give you huge confidence. Here's another one, below, with its wings up away from the usual flat, resting position. It's preparing to make its escape from yet another threat. Me. 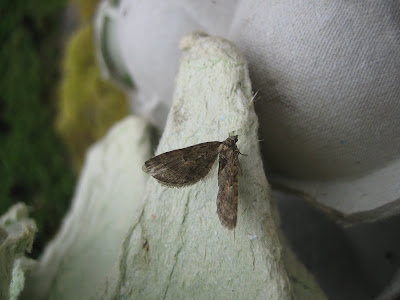 Otherwise, the trap continues in its modest March way, with the Quakers, Drabs and Hebrew Characters returning for their nightly conclave. Cold weather has replaced the amazing sunshine of the last ten days and the Met Office talks of snow. When the north wind doth blow... Although actually these are north-easterlies, and they have the feel of Spitzbergen about them.
Posted by MartinWainwright at 12:42