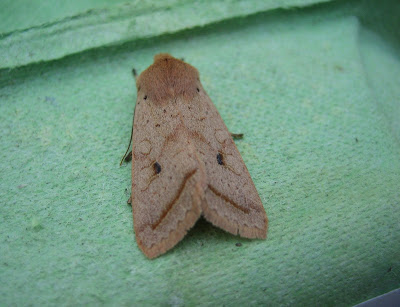 There was a Quaker meeting in the trap last night. Only two different friends, but attractive ones. Indeed, they may be new here, both of them, although neither is uncommon. I will check back. Autumn is their time of year. Above is the Yellow-lined Quaker and below, the Red-lined one. Quaker moths were so named because their neat appearance resembled that of members of the Society of Friends. Some use the word 'plain' but I don't find that the case, any more than it was with Prudence Pym, the heroine of The Quaker Girl, whose simple bonnet and dress became the height of fashion in Paris, after she was thrown out of her home by her parents for drinking a glass of champagne.

Prudence was played originally by that lovely flower of Bradford, Gertie Millar, who was born in Manningham, where I also once lived in Southfield Square. I can't resist adding a picture of her too. If you swap over to my other blog, True North, you'll find an entry on her there too, on 18 January this year, because I have two books, one on Famous People from Bradford and the other on Famous People from Sheffield, which both claim her. But Bradford is right. Quakers btw got their name from a sarcastic judge in Lincoln, after George Fox 'bade him tremble at the word of the Lord.' My red-lined Quaker is duly trembling, preparing for take-off from the bowl of the trap. Fox gave Quakers one of the best pieces of advice for life that I have ever read: 'Walk cheerfully over the world, seeking that of God (or you may prefer to read Good) in others.' 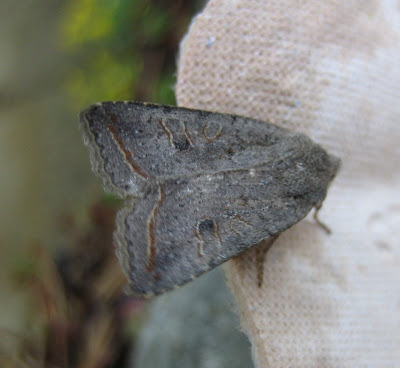 PS I just checked back and the Yellow-lined Quaker has been here before, but not the Red one. Huzza!
Posted by MartinWainwright at 07:13

OMG - how did we not know that you have another blog?? xxs

OMG indeed Sarah! Far too much reading awaits you. Actually the True North blog is really an online bibliography of the book, to save paper. I'm not nearly as regular with it as with the mots, shame on me, partly cos it involves scanning in book covers which adds a lot of time in my incompetent hands. It is VERY WET here. Hope not in France, where Mum and I had a ball. x and from P M
Oh PS, have you and Greg read Barbara Kingsolver's The Lacuna which I'm sure would appeal to you both (and L and T). BK is the sister in law of a v nice US academic called Mark Whitaker who wrote a biography of Sivaram Dharmaratnam, a distinguished Sri Lankan journalist who was the brother of Suri, our lovely in-law through our Tom and Abi. Siva was murdered some eight or nine years ago in SL's terrible, pointless conflict but MW's biog of him is fascinating. Anyway, if this tenuous connection ever led to a meeting with BK, I would be over the moon (or even moth).