Through an arch, darkly 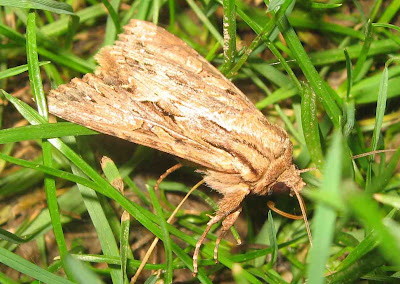 I've been in London at my second son Olly's graduation - his second, too, but I think that's it now for student days, and fees. He's done very well in his architecture MA at the Royal College of Art, and to mark this fact, an architectural moth duly appeared on the scene. I hadn't been expecting to post today, but Penny and I called at the London Building Centre and in the temporarily-grassed half-moon of land outside, there was this Dark Arches zooming about. Some actors were rehearsing Othello on a temporary stage in the sunshine, very loudly, and I think that had woken it up. It definitely had no plans to go back to sleep, so apologies for the rather rushed pic.

Nice to find a moth in the very heart of London, just off Tottenham Court Road. Good, too, to see the temporary installation and preparations for the play. Olly guided us to a fair number of other such 'Meanwhiles', or interim uses of space, including a little orchard by the railway arches in Union Street, Southwark, where some friends of his built an equally temporary lido pool last year. We have our own Dark Arches in Leeds, incidentally (pic right courtesy of excellent Leodis history site), the atmospheric space beneath the railway station where the river Aire rolls through in the dark and a murder victim was once immersed in a vat of alkali so powerful that the crime was only discovered via his undissolved shoe soles. Brrrrr, eeek! Heading North again now towards that very station, in blazing sun.
Posted by MartinWainwright at 09:27