I was going to introduce you to last night's Bronte Family of moths which came to the trap - all governessy brown, grey and black and apparently dowdy, but on closer inspection having wonderfully delicate and subtle patterning. But then I got to one of the last eggboxes and found this: the annual delight of the season's first Peach Blossom moth. It's one of the best arguments for taking an interest in moths, a common but beautiful visitor which most people never see. The colouring is very effective camouflage on the lines of 'dazzle' warships (see one of last year's posts, complete with exciting illustration), but I've tried to photograph it so that it stands out a mile.

I've just discovered, through the usual serendipitinous of Google, that there is a Peach Blossom Island in a lake in eastern China, known for its beauty but also as the setting for a novel by Jin Yong (Louis Cha) called The Legend of the Condor Heroes. The plot takes place on a mysterious and beautiful island filled with peach blossoms and secluded from the outside world. Given the global distribution of the Peach Blossom Moth, I bet (and hope) that they feature too. 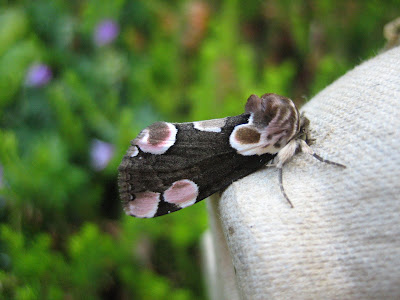 Hey Martin, this moth is sensational, though I think I would rather more identify with the Brontes. Can you refer me back to the blog entry where you explained moth-trap building? I am not going to be here in the country except on weekends most of the summer, but there will come two weeks at the end of July and I am really determined to prove to myself that Delaware county does, in fact, produce moths of greater variety than those I see - blurry eyed before my coffee - when I let the dog out first thing in the morning They are fine moths, but a little subdued, even on close inspection. So happy you are back! xxs

Hi Sarah! Great to hear from you. We had such a good time in the States - only sorry that we couldn't up to NYC to construct a huge trap for you. From the Sandia tramway (in which I clung to the central column, terrified) we saw what looked like a huge moth landing at Albuquerque airport. It was Air Force One, with the man himself on board. It was SO refreshing, coming to his US, and he seemed still very popular among all sorts we met. Now, as for a moth trap. Penny brilliantly got me mine (a Robinson trap, which you'll find on the web), so the most efficient thing would be to drop hints to Greg... You can make your own, using any sort of light, although a mercury vapour bulb (which needs some weird electrical modifying thing, is much more attractive to the moths. Even an ordinary outside light should attract some on warm evenings, although to trap them overnight, you need to fix the light on collar over a tub, with a covering which has a small space for the moths to creep in and shelter (egg boxes best), but not too big for them to crawl out easily. Smearing a micture of rum and treacle/syrup is another good way - nothing like as efficient as a light trap but maybe more fun. The moths don't have to have all the rum... Anyway, I'll look up some links. The net is bound to have a Build Your Own Moth Trap site, or thousands of them. If you are handy, or know anyone who likes making things, showing them the principle of the trap may well insire a good home-made one. I, however, am not handy, so Penny's present was inspired

Hi Martin - thanks so much. My guess is we will go the internet route, since neither Greg nor I are handy and our Tom, who is, has bigger fish to fry than building a moth trap for his old mother. (though he would if I asked, I know!) How thrilling to see AF1 - no matter where you were when you saw it! And yes, these United States are a finer place these days, even if we still have big problems to solve. His speeches alone are cause for celebration!