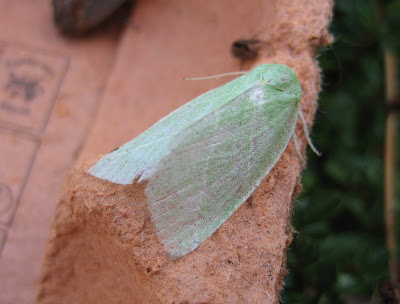 I thought that this was a lacewing at first, so translucent are its wings. But, wading through the assorted types of Yellow Underwing which jam-packed the trap last night (see below), I realised differently. It is a Scarce Silver Lines, not a common moth but one we get here every year, and it's clearly been around a while. I recorded a Green Silver Lines on 2 June and I would guess that this insect has been flying for the best part of two months too. 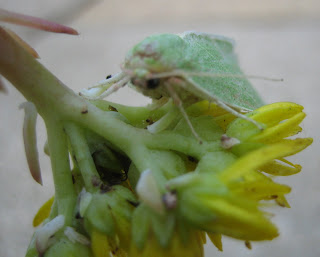 It still retains the vividness of its green on its head, a tribute to the quality of a pigment which in butterflies and moths pinned in boxes is the first to fade. As for the Yellow Underwings - Large, Lesser, Broad-bordered et al... You can see why some people wait until retirement before they take up moth trapping. I estimate that there were more than 500 of them, and it taxes the patience to work through the boxes to see what else has squashed in. 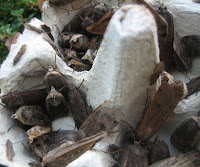 I did notice this season's first Copper Underwing, though, and hope to bring you a pic of one soon. I took one this morning but the moth was tetchy - maybe because of all those common-as-dirt yellow neighbours - and it came out blurred. To be fair to the English weather btw, it was a lovely super-warm August night.
Posted by MartinWainwright at 08:02