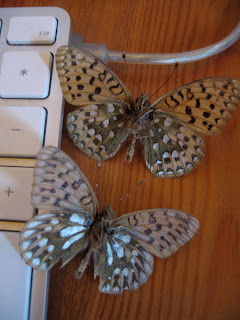 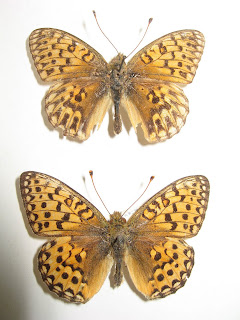 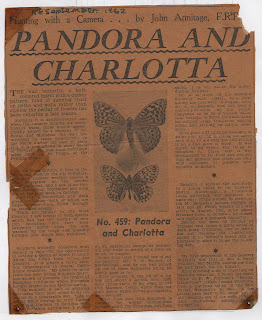 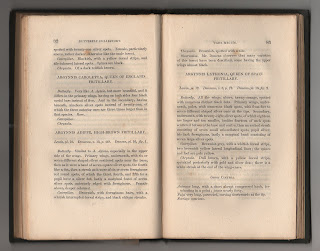 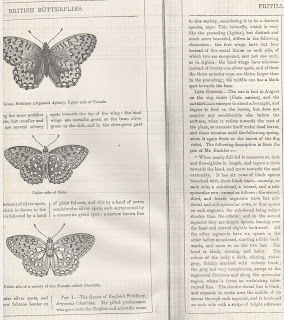 OK, that's it, at least for this year. Dear regular readers, I'll be back in May when trapping starts again. If you've stumbled across this page, or been drawn to it by one of my innumerable email footnote plugs, then please read on - backwards and downwards - should you have time. You may be bored or fed up, or the world may have turned on its dark side for a while. If so, there's a surprising lot of fun and distraction to be had from studying moths. That's true too if you're cheerful and well, which I hope is the case.
For this last entry, I'll do a bit of swanking, though I'm afraid it takes us back to the dark ages of killing bottles and pins. Hard to imagine, now, that I could go on my own into a chemist's shop in Leeds at the age of 12 and chirpily ask for a bottle of killing fluid. And be given one. Anyway, the vivid butterfly in the top picture with the slashes of silver is the rarest I ever caught. I've still got it, as you can see, posed next to the keyboard on which I'm tapping now. It's the Charlotta variety of the Dark Green Fritillary. The standard type is the other butterfly shown, top in the top picture, bottom in the second. The topwings are harder to tell apart, although I remember realising that I'd got something different when I saw the keyhole marks on the border of the bottom wings.
I caught both butterflies above Kynance Cove in Cornwall on the very spot where Prof Edmund Ford made a famous capture of a Monarch, an American butterfly which very occasionally - and probably with the help of ships - makes it to the UK. Most excitingly, for me, the event was recounted to readers of the Yorkshire Evening Post by John Armitage, the wonderful man in charge of the natural history department of Leeds Museum at the time. I've mentioned him before but it bears repeating: he was a brilliant patron of young naturalists and also an exceptionally good forger of postage stamps.
So there we have it. Double-click on the ageing press cutting to read the full story. The last two pictures came my way years later, when I found more references to Charlotta, which was even known by the 19th century woman collector Letitia Jermyn in her 1836 manual, The Butterfly Collector's Vade Mecum, as 'The Queen of England Fritillary.' There's grand. The YEP article, incidentally, was the first time my name appeared in print, apart from class lists in the Bonny Babies' section of Leeds Children's Day 1951. It may be why I became a journalist.
Posted by MartinWainwright at 05:00 3 comments:

Up in the air 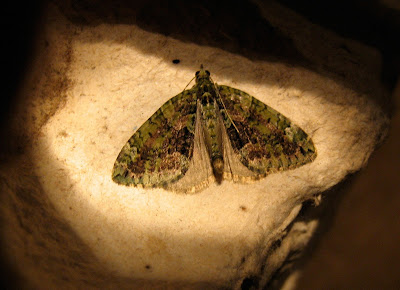 I finally managed to achieve a summer-long ambition last night: hoicking the trap up on to a balcony for a (relatively) high-altitude survey. We made a screen of old towels to protect our kindly neighbours, but alas I'd left it too late. The night was cold and I switched the light off at 11.30pm because rain was forecast, although in the event it hasn't come. The result was a mere two moths. It wasn't a complete waste of time, though, because this one, our old friend the Green Carpet, behaved in a way which increases my interest in how and why moths react to light. Disturbed as I bumbled indoors clutching the trap, it flew fast and drunkenly round in circles, before collapsing on to a pile of books. It tried several times but was far too disorientated to escape. This seems to bear out suggestions that moths are not so much attracted to bright light as confused by it. I shall try to find out more next year.

As patient, regular readers will know, I am specially fond of the colour green in moths, so here is another picture with the colour enhanced(ish) by flash. If you double click on it, you will see that the moth's tail, held upwards in that distinctive way, looks exactly like an old-fashioned shaving brush. PS Note Martin Harvey's kind and helpful Comment. This is a Red-Green Carpet, rather than a Green one. Sorry.
Posted by MartinWainwright at 07:51 2 comments:

View from a (temporary) prison

Penny thought this one was interesting, when I was flicking through the night's photos. On reflection, so do I. It's the moth's-eye view of the mercury vapour lamp from below - although, actually, it's more strictly the view a tiny human would have. Moths' eyes are very different from ours, with lots of lenses set like a honeycomb, as in this picsie below, courtesy of Mainland high school in Daytona Beach, Florida, which has an outstanding page on the subject.

The world must be an enormous kaleidoscope to moths.
The big pic shows the only way out of my trap, at least until I creep out in the morning. If you imagine the lamp being on - and it is much too bright for a human to look at directly - you'll understand why the moths prefer to go off to sleep under the eggboxes. Here's another pic, with the same Plume Moth clinging dozily on like a letter T. 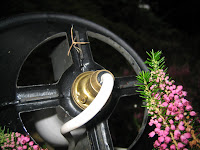 Actually there's very little in the trap now, and tonight will be my last session for 2008, provided the rain stays in Lancashire. Apart from the Plume, last night saw a few tattered veterans such as Orange Underwings and these two micros, which look like very small, ermine-clad members of the House of Lords heading off to vote in different lobbies.

Posted by MartinWainwright at 15:55 No comments: I know I've mentioned, and indeed pictured, the famous Peppered Moth before. But here's another outing for it, to mark today's status as the International Day of Elderly People. I don't quite qualify for that, yet (see my exciting profile, left below), but it's getting closer. Anyway, I managed to sneak a bit about the Peppered Moth's distinguished place in gerontology and specifically the study of centenarians into the Guardian today. Rather than repeat it, here's the link: http://www.guardian.co.uk/lifeandstyle/2008/oct/01/healthandwellbeing.genetics. I was very pleased to find that all the moth people involved reacted extremely speedily, from Mark Parsons of Butterfly (and moth) Conservation and Ben Sherwood of the Linnean Society to the guru Dr Mike Majerus who is mentioned in the piece. He's also the author of the new Moths volume in the wonderful Collins New Naturalist series. He's done Ladybirds too, making him one of the few NN 'double' authors. My hero Prof Edmund Ford was another, writing both the original Moths, plus his great contribution, Butterflies. The other thing about the Peppered Moth is that it stars on innumerable internet references through its unsought role in the debate about 'creationism', in which opinions tend to be firm and furious. Dr Majerus has somewhat undermined the creationist belief that Peppered Moths are not found on tree trunks (relevant to the debate via the evolution of camouflage). In the most recent reference I found yesterday, his tally of such finds was 47.
Posted by MartinWainwright at 07:10 3 comments: