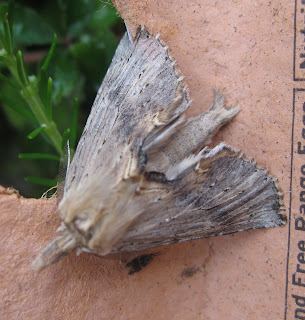 Here's a strange beast: the Pale Prominent. It has a unique fore-and-aft arrangement of its 'snout' and distinctive tail. It was tucked to one side in the trap among some 500 yellow underwings of various sorts. The bird and bat population must be extremely healthy round here. The role of moths as indicators of such things was very well explained in an episode of BBC's The One Show yesterday which you can watch again on www.bbc.co.uk/iplayer/episode/b00m3zv3/The_One_Show_10_08_2009/ My mother-in-law was fascinated, noting that the moth trap featured was exactly the same as mine, down to the random egg boxes. Here's another, more handsome Prominent which settled by the trap's lightbulb last night and was unperturbed by slight drizzle. It's a Swallow Prominent, or possibly a Lesser Swallow; you sometimes have to do nasty, dissecty things to tell the two apart. The term 'Prominent' comes from pronounced tufts on their bodies. The One Show's presenters were a bit put off by moths' hairiness, but eventually ended up contemplating giving a beautiful pink and golden Elephant Hawk a quick stroke. 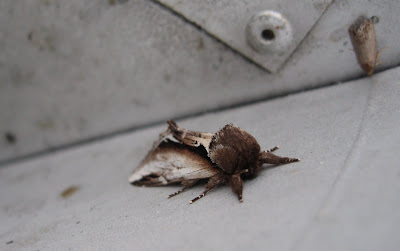