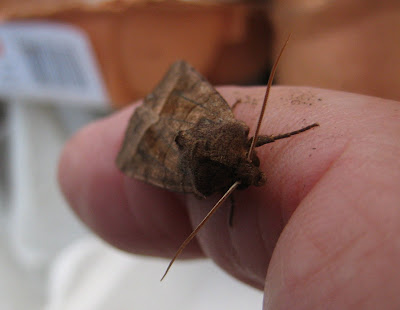 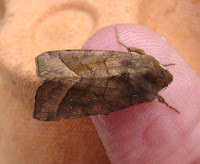 Here is a Rosy Rustic on my pink thumb. It's a late summer moth, one of a group of August and September flyers which are at last making inroads into the massed ranks of yellow underwings. It was very misty last night with a warm evening after a day of rain. You could almost drink the air. As a result the trap was emptier than it has been since April. The Rosy one took a long time to wake up, in spite of my promptings designed to get it close enough to the camera in a light enough place. But it finally took wing and whirred off into a loquat which was given to me years ago as a seedling by the Guardian's then motoring correspondent, Roy Harry. Now it's a great, spreading tree.
Posted by MartinWainwright at 07:07

Lovely Rosy Rustic, once I see one of these its alnmost time to put the shorts away!
Look out for the lovely Sallows that will be around within the next few weeks, their colour will make them well camouflaged once the leaves start to fall.

Thanks for the tip - I will be on the alert. It's sad that autumn's coming, although the colours make it a brilliant time of year. And it can be ever so warm in September and even October - hope so, anyway, as I'm off to the Lakes for part of the time. Maybe I'll take the moth trap... All best M