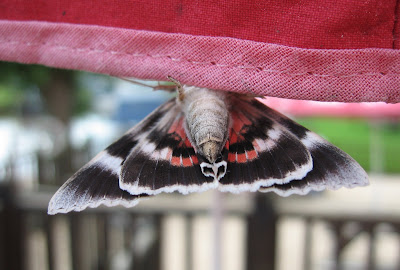 Another spectacular birthday moth! We've been celebrating Penny's at a nook called Tadpole on the Thames, and walked upstream to Radstock Bridge, the pretty albeit wasp-infested pub pictured below. We were just celebrating the success of P's decoy, an ashtray with a bit of J2O juice in the bottom which absorbed about 15 wasps, when she said: "Look what's behind the S of Pimm's.' Eagle-Eye, Junior Spy - because there by the end of the red banner advertising the famed summer drink (left in the pic, above the blue narrowboat) was an enormous moth. Only the hawk moths are bigger, among types that come to the Leeds trap. 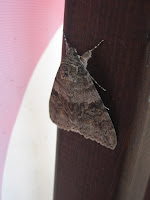 It was a Red Underwing, yo! But as always, it was hiding its red when at rest; only the camouflaged grey and brown pattern of the topwing showed (see right). When I gently tried to coax it on to a bit of paper it flew up and perched on the edge of a Pimm's sun umbrella. It sayed just long enough for the pic above, in which the splash of colour on the underside of its underwing goes nicely with the Pimm's pinky-red. We have got an old picture of a Red Underwing in Leeds, which flew into our garden in August one sunny afternoon about ten years ago (they are regular day flyers). This is the first I've seen since. 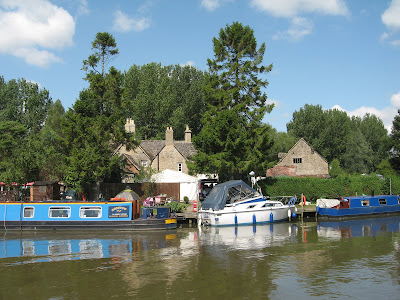