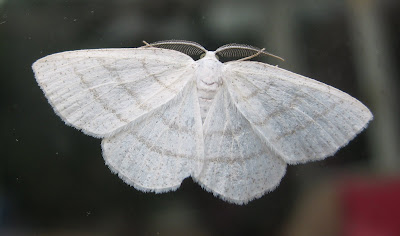 Here's a Common (but wonderfully delicate) White Wave for you, with my focussing for once on target. It looks like a bride, albeit one with rather alarming antennae and bulging eyes. Topside above, underview below. Blue is the colour which interests me at the moment, though, rather than white. Olly's birthday comment, two posts below, got me thinking: why I am so pleased by green moths such as the Large Emerald which came that day, when blue is my favourite colour? The answer, which I'd never thought about before, is that there are no blue British moths. One or two, notably the Death's Head Hawk have some vaguely dark bluish bits of pattern; and the Clifden Nonpareil which I would love to see one day, has broad bands of pale mauve like the rose Blue Moon. But there is no real blue. Why? I looked the subject up in my super-Bible, Moths by E.B.Ford, and he says as early as page 6: 'The distribution of these pigments should be more thoroughly studied....and such an investigation would be a delightful task.' That was written in 1955. I wonder if anyone has done the delightful job. I will try to find out and pass their findings on in precis, if so. I suspect that it has something to do with night, since British butterflies (which are scientifically in the same family as moths) have a fabulous range of blues. 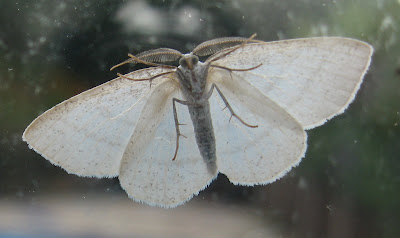