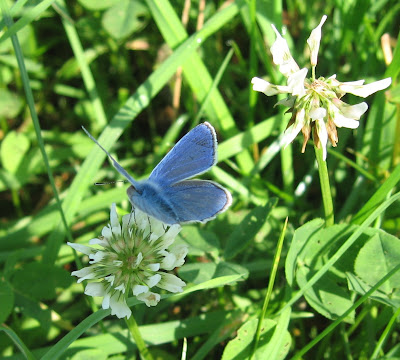 Tadpole was ablaze with butterflies. Reluctantly, I have to admit that the South does much better than the North in this regard. I've known that ever since I was a boy and my cousin Tim in Bristol compiled far bigger lists of species than I ever could. I think it's the same with moths, but the difference is much more noticeable with butterflies, simply because they are more noticeable. The buddleias in the pub garden were quivering with Peacocks, Red Admirals, Painted Ladies and Small Tortoiseshells, often three or more insects on each flower spike. It was the same on a bed of lavender with Large, Small and Green-veined Whites and Brimstones. Best of all, because they are seen more seldom up here, were the Common Blues which jinked out of the way all along the Thames Path to Radstock Bridge (home of yesterday's noble Scarlet Underwing). It was all because the sun was shining. When it goes in, so do the butterflies, on the whole. That is when people start saying: "Oh woe! There aren't as many butterflies as there used to be." They should go and have a drink at Tadpole. Anyway, here's Mr Blue above and Mrs below. Do click on Mr to enlarge because the colour is ravishing. You can see why I'm so sad about the absence of blue in British moths (see quasi-scientific musings in posts below). 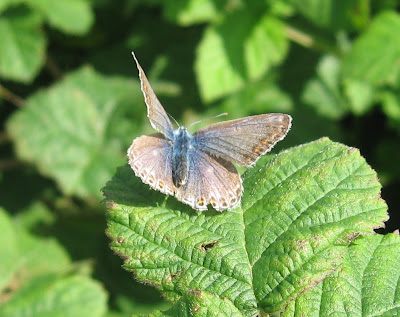