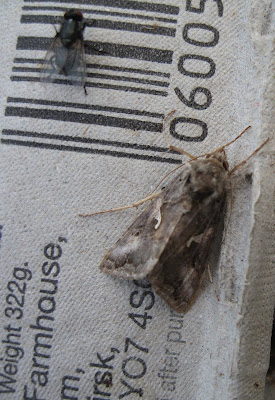 Barcodes continue to fascinate my more discerning moths. While the yellow underwings cram into the eggbox cones, visitors such as this Silver Y head for the black and white stripes which have such an outline-breaking, eye-muddling resemblance to dazzle camouflage. Ages ago, I noted how Peppered Moths in particular went for the codes, which tallies with their famous reputation as pollution indicators; as the north has become less grimy, so its proportion of melanistic - sooty - Peppered Moths has decreased. 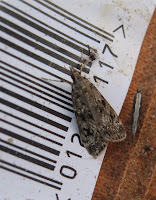 The other barcode admirer is some sort of Snout, I think. Is it a Pinion-streaked one? They are described as local in Waring, Townsend and Lewington, meaning only common in certain areas, but they do fly in August, and it has that distinctive, sharpy shape.
Posted by MartinWainwright at 08:35

Brill - many thanks for keeping me on the straight and narrow. Just back from a bike ride during which I missed a woolie bear caterpillar by about half a millimetre