The year's first butterfly came skimming over to join Penny and me for a sandwich lunch in the sunshine yesterday. It was a Peacock, a hibernator woken from its winter slumbers by the exceptionally warm weather. Its appearance was well-timed, too, because I had just been emailed these wonderful pictures of a Purple Emperor by Prof David Colquhoun of University College London whom I met with his wife Margaret at the Guardian Open Weekend. 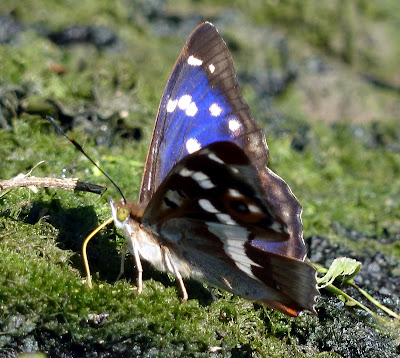 He writes a fascinating blog called DC's Improbable Science which you can link to here and is also a Fellow of the Royal Society. So I'm specially proud, as someone who failed Physics with Chemistry O level (coming in the bottom two percent in the country according to my irate teachers at the time), that I helped him and Margaret with the complexities of the temporary car park. 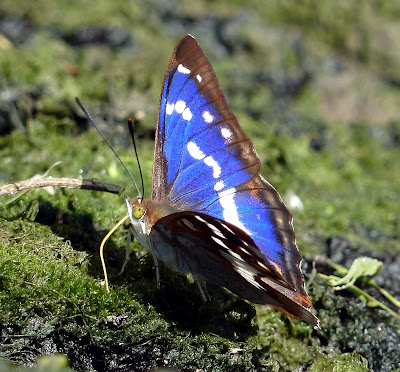 He is a lucky man. He came across his Emperor quite by chance beside the Grand Union canal - at Deep Denham lock, he is almost sure - in July 2011. This is also appropriate for me, because one reason for my appalling performance in Phys with Chem is that there was a question about a barge displacing water in a canal lock which I couldn't understand. So I just drew a picture of a barge in a lock. (Quite a good one, because I did pass in Art, even at A level). Thanks very much to the Prof for allowing me to use his magnificent pics.

Update: Patrick my expert butterfly colleague has consulted his fellow-experts and is pretty sure that this is the first Purple Emperor to be recorded within the M25 London ring road. It was only a wingbeat inside that noisy boundary, but significant nonetheless. Prof Colquhoun's original blog entry is here.

PS: Sorry, I messed up on the links initially, duplicating the http thing, but they work now.
Posted by MartinWainwright at 08:08

Hello! Memo to myself, and the wider world. It's 21 April now and I just got this email which I duly pass on:

Hello Martin
As the experts Patrick consulted can we just correct an inaccuracy in your blog report. Purple Emperors can be found inside the M25 - they are found at Ruislip Woods in Middlesex and Bricket Wood in Hertfordshire (both inside the M25) and we have had reports from Enfield again inside the M25 although we are still waiting for our elusive sighting there.

Many thanks, and v glad to put that right. May they spread!