All in an afternoon 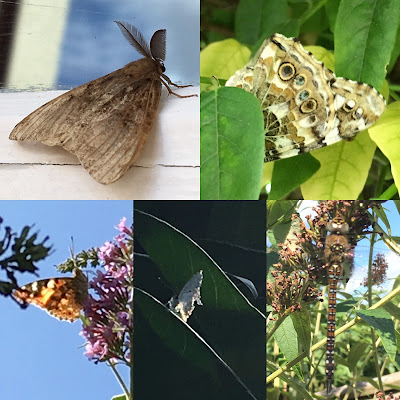 The weather has damped down the moths for the time being, but it is marvellous what you can see in the course of an afternoon with the grandchildren in London or a morning's country walk in Oxfordshire.

The collection of pictures above were taken during a three hour spell in-and-out of a garden in Walthamstow, east London, as densely urban an area as anywhere in the UK but buzzing with insect life. From the top left clockwise, we have a rather battered but still game male Gypsy moth, a species which became extinct in the UK in the early 1900s when its Fenland habitats were drained.

Its brightly-coloured and hairy caterpillars can be a notorious agricultural and forestry pest - but the European strain, which arrived here in the 1990s, seems to be flourishing in more varied surroundings and has so far remained unmolested by the authorities. Perhaps it earns a little affection from the eponymous aircraft, the De Havilland Gypsy Moth, one of the most popular to have seen service, with quite a few still flying as vigorously as the moths, if a lot more loudly with their lawnmower-like engines.
U
Then we have a Painted Lady butterfly lurking among the blade-like leaves of a large clematis; a female Common Hawker dragonfly; Update: apols - and many thanks to Commentor Conhead. This is a Migrant Hawker, not a Common one. As he says, paradoxically the Common Hawker is rare in London, while the Migrant Hawker, though not a Common one, is common; a Holly Blue which is almost always around there on sunny days and the Painted Lady again, high up in the neighbour's thriving buddleia. 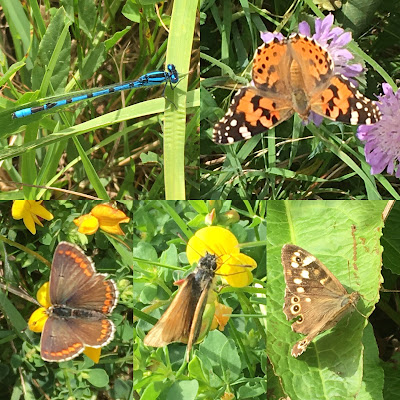 Meanwhile the sun came out at intervals between yesterday's rain and when it did, things turned lovely and warm. In the course of a local walk I saw above, a vivid damsel fly, another Painted Lady, a Speckled Wood, a battered Small Skipper and a female Common Blue, a butterfly whose successful expansion recently made the national news.

Below is that delicious creature, the male Common Blue, another Holly Blue, country cousin of the one in my first picture, another female Common Blue showing more of the blueish sheen which suffuses her mainly brown dress, and a Small Copper underwing.

Posted by Martin Wainwright at 06:52

London has a real wealth of insect life, however despite its vernacular name Common Hawker would be a major rarity in London or much of eastern England as it is largely a northern + western species in the UK. Your photo shows a Migrant Hawker which is very common from late summer in London.

Hi there and once again, thanks so much. I will put that right now. All vb M