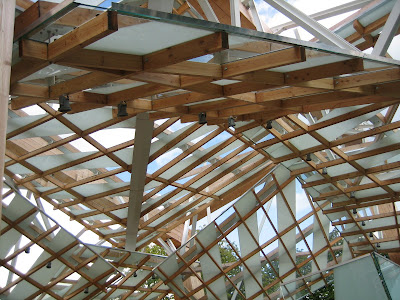 One of the pleasures of London in the summer is the Serpentine pavilion, built anew every year by a leading architect. It's Frank Gehry's turn this year, he of the wonderful Fred & Ginger buildings in Prague which seem to be dancing together. As you can see from the smaller pic, Gehry's pavilion is partly inspired by butterflies' wings.

Hooray for that. I thought the roof was a bit chaotic myself (and, yes, one of the nice attendants confirmed that it had initially leaked). But the overall effect is very light and pleasant. There was even a butterfly in attendance, a Green-veined White sauntering beside the Serpentine, just as we were. Much the best butterfly building I know is Eero Saarinen's TWA terminal at JFK airport in New York (how sad that they lost its lovely former name, Idlewild). My younger son, who is about to start his architecture diploma, once insisted that we see this during a rather tight flight changeover. I was a bit stressed at the time by dashing along ramps etc, but I'm very glad we did. I'm just goint to add small pics of that, and of the Fred & Ginger to complete this unusually architectural entry.